San Francisco-based Salesforce Inc. is rolling out more marketing automation features for its B2B customers, putting its acquisition of Atlanta-based Pardot to use with a couple of new tools for marketers and sales agents.

The Intelligent Engagement Studio presents marketers running complex campaigns with a flow chart-style visual representation. The map charts a targeted customer’s journey through the campaign from touch point to touch point, displaying data of how many leads you have at each node along the way. Marketers can take action on campaigns right away if they see an area that’s under-performing, switching out a creative asset or instead diverting customers to a new event.

The point of the dashboard is to help companies make better use of all the content they’re putting online, says Adam Blitzer, general manager and senior vice-president of Salesforce Pardot. While customers are used to scouring the web for information about a product before they buy it these days, often companies have no idea that’s taking place.

Down the conversion funnel with Vidyard CEO Michael Litt

When Michael Litt started up Kitchener, Ont.-based video marketing platform Vidyard a few years ago, one of the first sales representatives he hired was previously with Salesforce.com. Since then, he hasn't looked back

“That’s a challenge on one hand, but we want marketers to see think of it as an opportunity,” he says. “We see over the next few years that B2B companies will think of automation as automatic – it will just be something you do.”

Marketers will appreciate the colour-coded paths in the Intelligent Engagement Studio. Green means that most people are moving from one event to the other, responding positively to the campaign materials. Where prospects stop engaging, that path is turned red. The software will even make suggestions based on the analytics it’s outputting. For example, if an email gets poor response it might prompt you to try a different subject line. 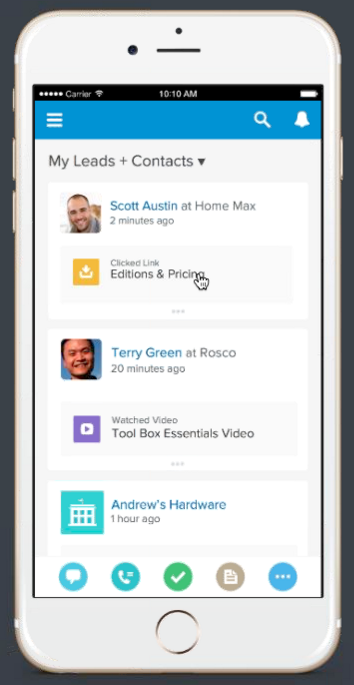 The studio will be available to Pardot Marketing Automation users in the second half of this year as a free upgrade.

Salesforce isn’t stopping there with its marketing automation releases. It’s also introducing Sales Cloud Engage. Rather than leaving sales reps to go rogue and create their own email marketing campaigns on the fly that they spam out to whomever, whenever, this app lets them know who is demonstrating the most interest in their product or service. When they do, they’ll have quick access to the content prepared by the marketing department.

For example, a sales person could be notified when a lead views the pricing information on the company website. That could be an ideal time to place a phone call.

Accessed on the Salesforce1 mobile platform, the Cloud Engage app costs $50 per user per month.

11 steps towards becoming an Instagram superstar
About Brian Jackson

Nearly a third of businesses are not ready to reopen right now, says Salesforce survey

Salesforce upgrades with voice everywhere and a single source of truth