There’s something uniquely Canadian about a company celebrating its runner-up status, but the achievement announced today by Vancouver’s BroadbandTV (BBTV) is undeniably impressive: its February viewership numbers fell behind only Google and Facebook, making it the third most-watched content creator online. 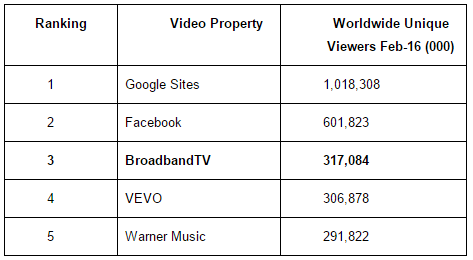 In fact, 31 per cent – almost a third – of viewers who watched video content across Google’s sites, including YouTube, watched content from BBTV in February, the company said.

BBTV’s leaders may be making some noise about their achievement, but are also making clear they don’t plan to coast on it. In a statement founder and CEO Shahrzad Rafati said she expects the company’s growth to only intensify this year as it acquires new content creators, settles into its new headquarters and, of course, continues creating new videos of its own.

Eric Emin Wood
Former editor of ITBusiness.ca turned consultant with public relations firm Porter Novelli. When not writing for the tech industry enjoys photography, movies, travelling, the Oxford comma, and will talk your ear off about animation if you give him an opening.
Previous articleTwitter brings Reddit-like ‘Moments’ feed to Canada
Next articleData race: Under Armour a leader but Canadian firms take a slower pace

A third of Canadians experiencing slower internet according to CIRA