If you’re the type of social media marketer who isn’t sure why your links aren’t getting retweeted or your Facebook posts liked, Hootsuite Media Inc. would like to help you out.

The Vancouver-based social media management platform relaunched its analytics suite last week, adding a host of new features designed to make viewing metrics such as follower numbers or engagement, or comparing one period to another, easier than before.

Currently in beta, the company’s new analytics service can be accessed from the top-left of your Hootsuite dashboard, just below the “Streams” and “Publisher” tabs. 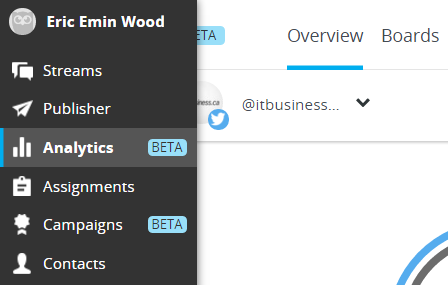 By default, the analytics service’s “overview” tab measures your account’s Facebook and Twitter performance in real time, displaying the number of posts, followers (for Twitter users) or fans (for Facebook users), engagement numbers (the number of interactions your posts generated), and Ow.ly traffic (the number of Ow.ly links clicked on).

Below, for example, the Hootsuite Analytics information for ITBusiness.ca’s Twitter account shows that we’ve sent out 19 tweets in the past week (five fewer than the previous week, presumably thanks to this past weekend’s Civic Holiday in Ontario); added 13 followers to our list of more than 5700; saw 18 users interact with our posts (five more than the week before); and had 29 click on our Ow.ly links (which, it should be noted, ITBusiness.ca has rarely used since Twitter began automatically compressing URLs).

No other social media networks are currently integrated with Hootsuite analytics, though the platform itself also supports Instagram, LinkedIn, Google+, YouTube, Reddit, Tumblr, and many, many others, so there’s no reason to believe other social networks won’t be added in the future.

In the meantime, Facebook or Twitter users wondering just how much or how little the number of users following their accounts has changed over time can scroll down their Hootsuite Analytics page to view a series of graphs.

Here, for example, we can see just how many Twitter followers ITBusiness.ca gained over the past week:

By switching our date range to the past two weeks, ITBusiness.ca can see that we’ve posted roughly the same number of stories over the past two weeks that we did during the previous two-week period – and also that we need to work on user engagement.

Now here’s where it gets really interesting. By hovering over the individual values in a graph, we can see when we tweeted something that our users found especially engaging, or that they were particularly inspired to click. 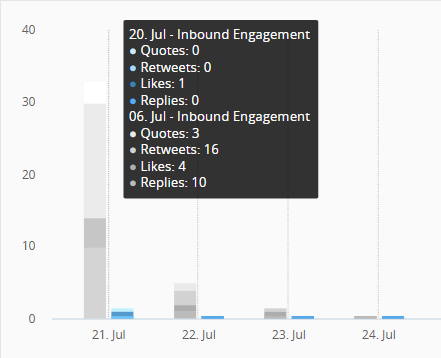 And the most users (15) clicked on one of our ow.ly links on August 1: 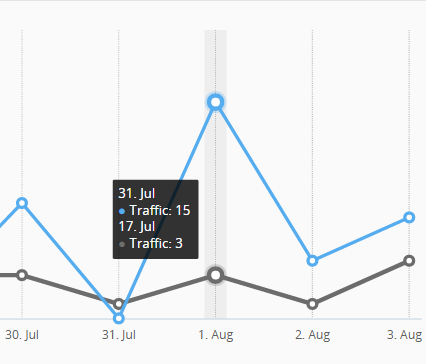 July 7 was the date of our recent ITWC blockchain Twitter chat, so it’s hardly surprising that engagement that day would be highest. But we didn’t publish anything on August 1 – the Civic holiday itself – so which story gained so much traction?

Unfortunately, we would have to select the “Boards” option next to the “Overview” tab to find out – and accessing Hootsuite Analytics’ board services, which allow users to track individual posts by user engagement, reach, clicks, and referrals, requires $60 per month.

However, if we scroll to the bottom of the free version we can at least learn which of our recent posts have been retweeted, replied to, quoted, and liked. Clicking on any of the headings will sort posts based on the ones that have the most activity.

(In our case, it’s a recent article on the actual size of Canada’s tech sector.)

Hootsuite Analytics can also be used to analyze social media-based customer service, with supervisors potentially using the service to monitor how quickly their teams respond to customer queries on Twitter. They can even filter results by individual, team, social media account, message type, or custom tag.

Eric Emin Wood
Former editor of ITBusiness.ca turned consultant with public relations firm Porter Novelli. When not writing for the tech industry enjoys photography, movies, travelling, the Oxford comma, and will talk your ear off about animation if you give him an opening.
Previous article
Now you can turn any Android device into a BlackBerry
Next article
Video impressions on mobile saw 3,000% increase: Google