You always hear it’s a bad idea to try and use your smartphone while driving these days, but insurance comparison service Kanetix Ltd. has created one that could actually help you improve your driving and save money as a result.

DriveSmart, an entirely hands-free app that runs in the background and tracks your driving habits, and then scores it based on how safe it is. The app will inform drivers if they might qualify for a reduced insurance rate if they were to agree to move to a usage-based insurance plan. That would involve having an insurance provider install a telematics device in your car and uploading data on your driving habits to them. In jurisdictions like Ontario, usage-based billing can only be used to lower your insurance rate – not make you pay more for dangerous driving – so it often ends up being a benefit for the driver, explains Andrew Lo, chief marketing officer at Kanetix.

The idea for the app came when Kanetix’s chief architect observed all the usage-based insurance plans being introduced about eight months ago. It occurred to him that the same driving habits tracking could be implemented with a smartphone app. After building a successful prototype that was accurately measuring driving habits, Kanetix decided to assign an in-house development team to the project. Today it’s releasing the app for free to app stores – and it’s not even asking for any information in exchange for the download.

“We promote ourselves as an advocate for the consumer,” Lo says. “So we get recognition for our great content and our great tools.” 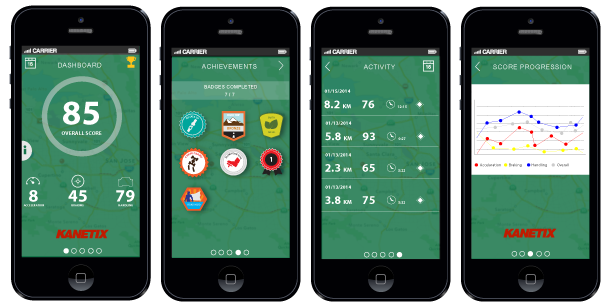 Kanetix created a proprietary algorithm for the app that taps into the motion APIs available in Google’s Android and Apple’s iOS platforms. It can detect rapid acceleration, sudden stops, and other hallmarks of bad driving – including whether you’re fiddling with your smartphone while behind the wheel.

“If you want a bad score, slam on your brakes, turn the corner and then take off at a fast speed,” Lo says.

DriveSmart has turned out to be more than just a brand awareness effort. Once the idea caught fire and the company invested its research and development resources into the project, the idea of holding regular company-wide hackathons was born. “If one person can have an idea that can change the company, why not try and formalize that with some teams in the future?” Lo says.

Plus, the app’s development could lead to an unexpected revenue stream as Kanetix is now offering insurance providers to white label the software and use it for their own usage-based insurance tracking. Not having to install a device in the car could convince more consumers to opt-in to such a program. Lo sees room to improve the consumer DriveSmart app too.

“We’re trying to think about how to add more valuable features,” he says. Preventing driver distraction could be one possible avenue – perhaps blocking the receipt of text messages until the drive is over.

Brian Jacksonhttp://www.itbusiness.ca
Editorial director of IT World Canada. Covering technology as it applies to business users. Multiple COPA award winner and now judge. Paddles a canoe as much as possible.
Previous articleSnapchat third-most used app among millennials, ahead of Twitter and Pinterest
Next article#FollowFriday – 3 analysts in big data and mobile