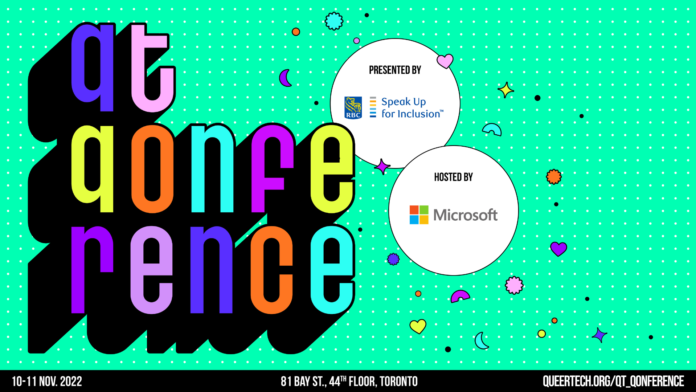 On the second day of the QueerTech Qonference in Toronto last week, Harsehaj Dhami, a 17-year-old machine learning researcher and founder of Codespire, and Andy Saldaña, chief operating officer & co-founder of QueerTech, spoke about Dhami’s journey in the tech world, and how she’s creating technology addressing gaps in accessibility to education.

Codespire is a non-profit delivering technological education to underprivileged youth. Dhami said after realizing that she wasn’t the only girl being sidelined in computer science and robotics education, she wanted to do something for her community.

“There are many more students that are in even more challenging situations, that don’t have this access simply because of those labels that society has put on them, essentially,” she said.

Codespire works in partnership with existing youth organizations and youth homeless shelters to deliver education, in person and online, through workshops that cover programming, digital design and digital literacy.

The company has partnered with Boys and Girls Club Canada, the largest after school program in Canada, as well as Canada Learning Code, the largest coding advocacy organization in the country. So far Codespire has reached over 15,000 youth.

Dhami noted that Codespire initially focused on coding and programming, but after visiting vulnerable communities and seeing the need for other skills, the program has evolved.

“In my first workshop with Youth Without Shelter, which is a youth homeless shelter in Etobicoke, I noticed that the students didn’t even know how to use Google Docs. And this was a shock to me, because that is the new paper. And these students didn’t know the paper of the future.”

She added that Codespire is looking to host an event for students in December that allows them to come in person and explore different technologies while speaking with industry professionals.

Apart from Codespire, Dhami has also ventured into other projects.

About a year ago, when the DMZ, Toronto Metropolitan University’s business incubator for early-stage technology startups, hosted a Hackathon called Hack Against Hate, a four-day national competition where Canadians aged 15-29 were invited to create a prototype for a digital solution that stops hate crimes, Dhami wanted to look into hate crimes that impacted LGBTQ+ communities.

“I had never been to a Pride Parade, mainly because I’m scared of the hate that can occur at Pride parades, and I realized that there are many stories of hate crimes happening, and this was very shocking to me. How can a safe space for this community be so unsafe?” she said.

Dhami and her business partner, Samantha Ouyang, created a tool called Pridtect to protect people attending Pride Parades and help them feel safe. Dhami prototyped an app that uses safe zone mapping and distress signalling. It also looked into the population of the areas the parades were being held. She and her partner noticed that where there were higher populations, there was a higher prevalence of hate crimes.

Dhami and her partner ended up being one of the teams to win the Hackathon. Going forward, she’s looking to partner with a Pride Parade to develop the tool further. She is very passionate about making technology and education accessible to all communities, and seeks to do so through her work and projects.

“I just really resonate with this whole conference’s focus on access to technology, but it’s such a huge issue…We’re making all of these interesting advancements in technology, but that’s only serving to widen this gap between those that don’t have it and the rich and the wealthy…how do we ensure that every single person on earth can have the same quality of life and the same starting point, which is very difficult knowing that their societal barriers and then how can we get them to access self driving vehicles, crypto, blockchain technology, and things like that.”

Samira Balsara
Samira is a writer for IT World Canada. She is currently pursuing a journalism degree at Toronto Metropolitan University (formally known as Ryerson) and hopes to become a news anchor or write journalistic profiles. You can email her at [email protected]
Previous article
QueerTech event aims to make tech a welcoming career space for everyone
Next article
Deloitte announces winners of 25th annual Technology Fast 50 program and unveils insights from winning executives