The gig economy and its use throughout business is a constantly rising trend, and yet one that not everyone fully understands or sees the benefits of.

A recent webinar produced by IT World Canada, featuring input from ITWC President Fawn Annan, Curasion President and Chief Product Officer Andrew Dillane, and David Francis, senior research analyst at Staffing Industry Analysts, broke down what the gig economy is and how businesses can use it.

Based off of similar cloud-based platforms like Uber and Lyft, the gig economy connects employers with specialized candidates who are available for contingent and short-term work. By doing so, it’s changing the staffing industry and how HR operates. Staffing Industry Analysts define it as one of several names used to describe various forms of “gig” work, or small project freelance work. Others include “on demand economy,” “collaborative consumption” and “sharing economy.” 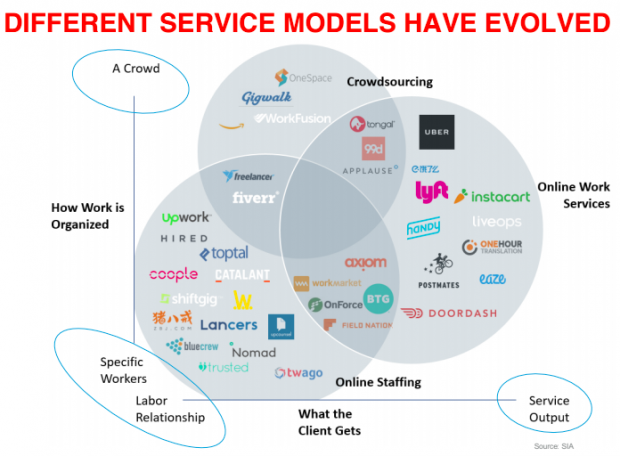 “You get access to existing resources and data that you are not bringing. Access to a network of staffing providers to fill roles you may not have had access to before,” said Dillane.

Watch on demand: The Gig Economy: Is it right for your business?

In fact, since 2014 the percentage of buyers (1,000+ employees) using online staffing services has risen from four per cent to 15 per cent, and the amount considering using it in the near future has risen from 10 per cent to 53 per cent.

Dillane says he believes the recent rise in the use of cloud-based platforms like the gig economy can be attributed to what he calls “the perfect storm;” breaking down the main factors as new trends and capabilities, the ability to fix old problems, and the ability to provide what customers need. 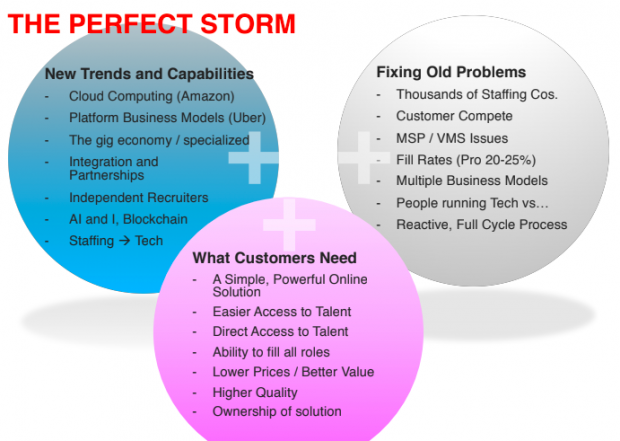 So what kind of businesses are using this tool the most?

According to statistics from Staffing Industry Analysts (SIA), 83 per cent of spend in the gig economy is coming from companies with revenues under $100 million, 80 per cent is being spent on remote work, and a startling 63 per cent of spend is going towards the hiring of IT and marketing/creative professionals.

Despite the surge in usage, there are still many businesses yet to adopt the approach and Dillane says it comes down to the fact that it is facilitated by new technology, and it always takes time for everyone to get on board with new developments.

“Companies don’t yet realize what is possible. Way back when things moved from horse and buggy to automobiles with Henry Ford, you could really tangibly see the results. Until companies decide to take this plunge and actually get into these online platforms, I think a lot of them don’t yet believe that they can be better, cheaper and faster. There is change involved, and change takes time,” said Dillane.

Dillane encourages this change, quoting that only about 20 per cent of the time does a company find the right candidate after going through the hiring process, and he believes that the gig economy can be one solution to this issue.

Just as businesses across the world are jumping on board with the gig economy, so are workers.

And Francis says that it simply due to the advantages that are provided by the system for those looking for short-term and contingent work.

“I think a big part of it is just the flexibility and autonomy that is available. A lot of the reason is that they can control their own schedules. They can work when they want to. They don’t have a boss. They’re more or less in control of when and how they work,” said Francis.

So as we see employers using the gig economy more and workers putting themselves out onto this relatively new market more and more every day, it does not seem as though the gig economy is going away any time soon.

So you might as well take advantage of it, says Francis.

“If you feel there is a talent gap or if you’re having trouble sourcing, there is a wider talent pool that you may have not thought of. So don’t be afraid to do so.”

Buckley Smithhttps://www.itbusiness.ca
Staff writer for IT World Canada. Covering the world of technology as it applies to business. Buckley is an avid sports fan who loves travel, food, and music. Can be contacted at bsmith@itwc.ca or 416-290-2000.
Previous articleITAC puts forth suggestions for ICT industry in 2019 federal budget
Next articleHashtag Trending – Pi Day celebrated; Google Earth’s take on Carmen Sandiego, the million-dollar Ninja