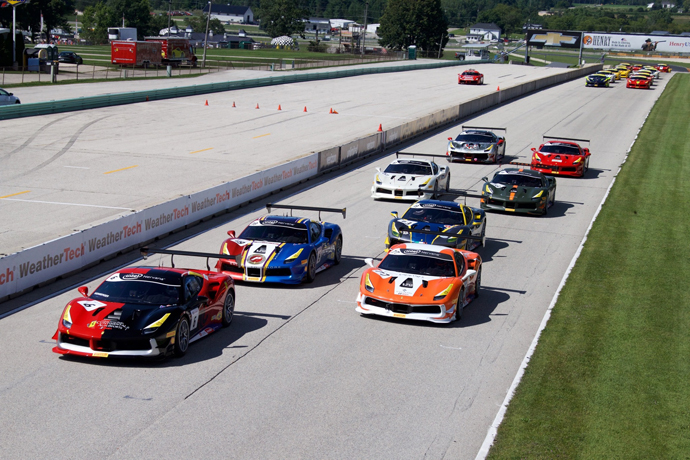 You’re sitting in the bleachers and the roar of powerful engines starts rising in the distance; seconds later the pack of Ferrari race cars speed past and you crane your neck around trying to see what position your favourite driver is in.

That’s the typical experience of car racing fans today, but if a partnership between Intel Corp. and Ferrari Motor Sports is a success, it might be much different tomorrow. A new system that involves artificial intelligence and a fleet of drones shooting video was showcased by Intel at CES 2018 booth this year. Not only could it change the fan experience for auto racing, it’s also providing Ferrari drivers more insight into their performance.

Intel CEO announced the three-year partnership on stage during his keynote. The technology will be on full display at the Ferrari Challenge North America Series, which begins Jan. 25 in Daytona, Fla. From the fan perspective, viewers will now be able to track their favourite drivers from above thanks to Intel’s neon framework.

“Imagine the race is happening and you’re just watching the cars go past you from that one location in the stands,” says Julie Choice, senior director and head of marketing at Intel Corp. “With the use of drones we have an aerial perspective to see the entire race track from the sky.”

Behind neon is a deep learning framework that’s powered on Intel Xeon processors, typically seen in server hardware. Training that deep learning model to learn how to keep track of the same cars is Andy Keller, a deep learning data scientist at Intel’s Nervana division. In a blog post, he describes how Intel collected drone footage of each race during the 2017 season of the Ferrari Challenge North America series, providing the video footage needed to train neon using fine-grained object detection.

“To achieve broadcast quality driver detection on a live stream, we needed to combine novel data collection, custom data pre-processing and careful model tuning to overcome challenges and deliver a working model,” he writes. “The model is robust to changes in lighting, angle, orientation, size and can even classify partially-occluded cars correctly.”

Intel’s Xeon scalable line of processors are well-suited to handle the workloads for this AI task because it’s the most powerful chip Intel mass manufactures. (It’s just a coincidence that it rhymes with “neon,” Choi says.) Another Neural Network Chip that Intel also unveiled at CES 2018 won’t be implemented into this project, but it could be in the future.

“The first silicon just came out,” Choi says of the neural networking processor.

The AI-powered aerial experience isn’t just for fans enjoyment. Ferrari drivers are collaborating with Intel to combine that footage with data coming from their cars to try and improve their performance. More than 100 telemetric sensors are attached to the cars, emitting 400 TB of data in just one race that can be further scrutinized with AI assistance.

This video from Intel explains the collaboration:

Brian Jacksonhttp://www.itbusiness.ca
Editorial director of IT World Canada. Covering technology as it applies to business users. Multiple COPA award winner and now judge. Paddles a canoe as much as possible.
Previous articleAmazon reveals shortlist for HQ2 – and it includes Toronto
Next articleLegal, finance and medical industries could benefit from new reading AI, expert says