When Apple Inc. launches something, it’s not usually a quiet affair. A typical launch-day event for a new iPhone, iPad, or MacBook will see San Francisco’s Yuerba Buena Gardens packed with media live blogging every detail as they are announced with a great deal of ceremony by Apple CEO Tim Cook and a host of other top employees. But that didn’t happen with the launch of iBeacon.

The enhancement to Apple’s location-based services on its mobile devices was included in the major iOS 7 update announced at Apple’s Worldwide Developers Conference (WWDC) in June 2013. Craig Federighi, Apple’s senior vice-president of software engineering, didn’t even mention it during his keynote delving into the technical aspects of iOS 7 – the only hint of its existence was its appearance alongside other new features of the iOS update on a solitary slide. Apple has remained quiet about the technology, despite deploying it at its U.S. retail stores, and declined an interview request for this story.

I called the #Apple store at the Eaton Centre to see if they were using #iBeacon yet. They say they're not using it in Canada yet.

Yet almost one year after its unveiling, iBeacon is on the cusp of popularity, despite the absence of Apple messaging. Technology firms offering services to marketers are grasping onto iBeacon as one of the main indoor positioning system tools that could provide marketers with a way to both push relevant messages to shoppers and glean insights into a quantified view of how consumers are moving around a store. As some early adopters are rolling out iBeacons – Major League Baseball announced at the end of March it would have iBeacon deployments ready in more than 20 stadiums by opening day – tech-savvy marketers and the vendors that serve them are watching and waiting for what Apple will say about iBeacon and where it’s taking it next.

While he’s not sure why Apple refused an interview request, instead directing the request to him for this story, Gartner Inc. analyst Mike McGuire suspects it may be because he previously covered Apple when conducting research in the music industry. He’s also not sure why Apple has been so quiet about the technology, and compares its emergence to PassBook, a mobile app that Apple debuted with its iOS 6 update to help users organize their loyalty program memberships.

iBeacon isn’t a piece of hardware, but rather a technology protocol that takes advantage of Bluetooth Low Energy devices. It allows a device to detect a compatible smartphone within a short range and push a number known as a universally unique identifier to a device. From there a smartphone takes over, assigning that number to an app that recognizes what action should be triggered as a result. An iBeacon can detect when a device falls into three different range categories – a few centimetres away, within a couple of metres, or 10 metres or further away.

For marketers, it means opportunities to trigger events on consumer devices that support Bluetooth 4.0 (such as newer iPhone and Android devices) through an app. For example, a coupon for a cup of coffee could be pushed to a consumer walking by a coffee shop on the street. Marketers could also monitor what regions of a store environment see heavier traffic or lighter traffic with the right analytics tracking software.

Apple isn’t the inventor of Bluetooth low energy beacons. But iBeacon is definitely helping to popularize the technology, according to Asif Khan, president of the Location Based Marketing Association. His trade association has 700 member companies and 60 per cent are retailers or restaurants, a group that iBeacon is “extremely important” to, he says. The penetration of Apple’s devices in the North American market is the ingredient that will cause location-based marketing to rise.

“They’ve made it very easy to deploy iBeacon services,” he says. “If you have an iPhone or iPad running the latest software, it effectively is a beacon on its own.”

While Apple devices can serve as iBeacons, they’re not required. The hardware requirements are remarkably simple and can be thumbnail-sized as a result of the low power requirements to simply transmit a number within a short range once per second. One San Francisco-based company, Estimote Inc., modified its Bluetooth low energy beacons to also support iBeacon, placing them in colourful polygonal plastic shells.

If iBeacon succeeds at disrupting the location-based advertising space, the rewards could be lucrative. According to Research and Markets, location-based mobile advertising will grow to receive more than 60 per cent of the total spend on mobile advertising by 2018. Overall, the location-based mobile ad space is predicted to grow more than 150 per cent by 2020 and be twice as effective at getting consumers to click-through compared to the current mobile industry average of 0.4 per cent. It may be those high stakes that explain why vendors are betting on the iBeacon space even before Apple charts its course.

How iBeacon can be used

In Toronto, John Coombs is building his startup, Rover Labs, on iBeacon technology. Rather than focus on deploying the hardware to a retail location, Rover will help a company integrate iBeacon support into its existing mobile app.

“It’s what GPS did for Google Maps, making your app contextually relevant,” Coombs says. “If I’m walking into a store and seeing items on the flyer that are relevant to me, that’s a huge convenience.” 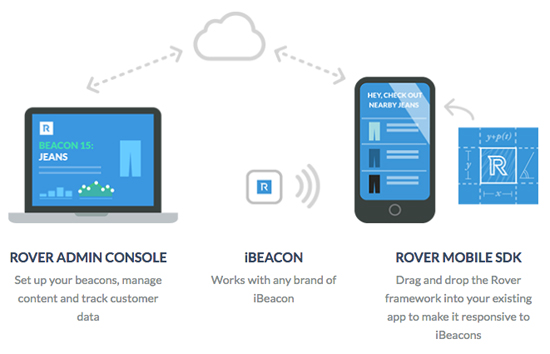 After starting up earlier this year, Rover Labs is already offering a Welcome Package product to interested retailers. Described as a personalized digital flyer, it consists of a set of cards that contain product recommendations and sale items that are presented to a customer based on shopping habits and personal interests. A greeting message welcomes the customer to the store, and could award them loyalty points for their visit. Then based on the products that customer has previously purchased or viewed, product recommendations are delivered to the mobile screen. Another card might be a store map, with directions to a product. The user can react by swiping to the right if they liked the message, or swiping to the left if not.

“Our app is the evolution of the loyalty experience,” Coombs says.

It’s not just startups that are taking iBeacon seriously as a marketing technology. At its recent marketing conference in Salt Lake City, Adobe announced it is supporting iBeacon in its Marketing Cloud suite. While details of its integration aren’t clear at this point, one new upcoming feature for Adobe Target was demonstrated in a lighthearted mockup on stage. It would allow marketers to take action in real-time to respond to iBeacon triggers, so they could choose to send a discount offer to a loyal customer, or to push product information as a customer approaches its display area.

Why iBeacon is creepy

Having messages pushed to your smartphone based on where you are in a store might seem creepy to some consumers. One retailer, Nordstrom, recently experimented with using a Wi-Fi customer tracking system from Euclid Analytics at some of its U.S. stores. Despite signage posted informing consumers of the tracking, many were surprised when they found out about the practice. After media coverage and many consumer complaints, Nordstrom responded to the backlash by saying it would discontinue the program.

The idea of invading consumer privacy has held up location-based marketing in the past, Khan says. But the perspective on how it’s used and what it’s really capable of has changed in recent years.

“Instead of saying let’s use this to influence purchase, let’s use the network to understand where people are and understand the analytics behind it,” he says. “That kind of data from a retail perspective is invaluable. It helps them understand how to lay out their stores for moving product.”

The Nordstrom incident spurred industry action, with vendors and retailers working through the Future of Privacy Forum to agree to a Mobile Location Analytics Code of Conduct that honours requests of consumers that want to opt-out of having their location collected, which is done by entering their phone’s Wi-Fi or Bluetooth MAC addresses at smartstoreprivacy.org. Of course, for iBeacon tracking to work, a customer would have to install a retailer’s app and have Bluetooth turned on.

Still, the privacy sensitivity could be why Apple isn’t trumpeting its technology yet, McGuire says. “They’re dealing with a creepiness factor and freaking people out.”

What’s next for iBeacon? 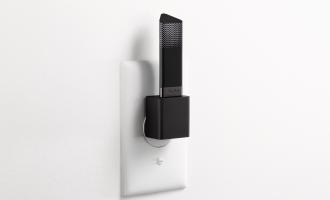 Last September, PayPal introduced Beacon, a small hardware device that allows merchants to accept payments from consumers in a hands-free way. Stores running compatible point of sale systems just plug PayPal Beacon into an outlet in their store and then wait for consumers to install the PayPal app. Once a consumer opts in to allow hands-free check-in and payments, they can walk into a store and be greeted by name as their photo appears on a merchant’s screen. When they want to buy something, they just verbally agree to make the purchase with the merchant and the deal is done. A receipt is emailed to the consumer.

Providing that sort of service is also possible with Apple’s iBeacon and may be the real reason it’s introduced the technology. While other smartphones have included near field communication (NFC) to allow consumers to tie financial accounts to their device, then tap to pay at cash registers that support the feature (also common on many modern credit cards), Apple has always resisted NFC technology.

“This is Apple’s answer to NFC solutions,” Coombs says. “This is their way to own payments.”

While NFC requires a device to be within centimetres of a terminal to communicate, Bluetooth Low Energy has a much longer range and a customer may never have to touch their device to complete a transaction.

“What we’re anticipating for this fall with iPhone 6 is that it will have a fully integrated payments platform,” Khan says. “The minute you can go and pay for anything in a store with your Apple account, that changes everything.”

Apple is still tight-lipped about its plans for iBeacon. But the technology will see a bit more exposure at this year’s WWDC, to be held June 2 to 6 in San Francisco. A session description on the WWDC website hints that iBeacon could go beyond mere static location information.

“Learn how to use the M7 motion coprocessor and Core Motion framework to efficiently measure motion and heading data from the accelerometer, gyroscope, and compass. Gain insight into guiding people to their destinations through enhancements to the Map Kit framework, such as new directions APIs, 3D maps support, controlling viewing perspective, and detailed map overlays,” the website says.

It may be that where iBeacon is going is predicting where you are going. So while others wait to see what the new iPhone looks like during this year’s WWDC keynote, marketers will have their attention focused on whether iBeacon gets its time in the spotlight.