So-called digital signage – or in layman’s terms, the practice of putting big screen TVs inside a customer-facing business location – has become almost ubiquitous over the last five years. Starting Monday, Hewlett-Packard Co. (HP) has been showcasing some new products in New York that could convince even more businesses to jump on the digital signage bandwagon, including low-cost and touch-screen options.

The six new digital signage displays showcased at the National Retail Federation Convention and Expo are aimed at the small to mid-sized market. Paired with a content delivery network suited for digital signage, businesses could use them to expose customers to a fine-tuned mix of entertainment and targeted advertising messages. The six new products have some technical features in common such as thin LED backlights and 178-degree viewing angles. 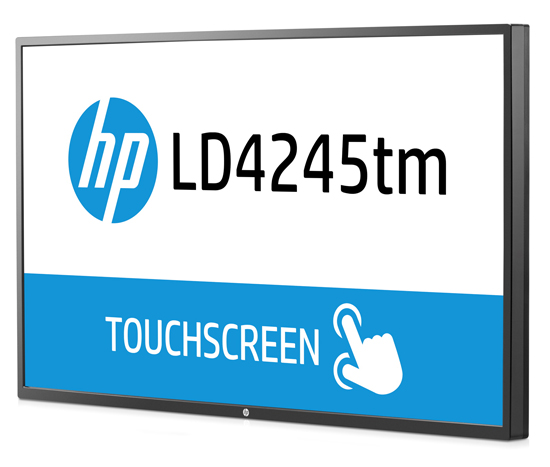 The 42-inch HP LD4245tm and 47-inch HP LD4745tm are touch-screen models that would be used at about eye-level with customers and intended for interaction. The screens a high definition and the touch sensors are infrared-based, and HP describes the screens as “reduced power consumption” with mercury-free back lights and low-halogen components. There’s also arsenic-free display glass, and nobody has ever wished for there to be more arsenic in anything, so that must be a good thing. The touch-enabled screens will be available in North America in March.

Lower-cost models are the 31.5-inch HP B321 and 42-inch HP B421 products. HP says they include essential features and include same LED backlighting technology as other models. They’re intended for prolonged daily operation and have a couple of other perks such as a built-in USB media player and streaming networked video support. The displays are to be available in North America this month.

On the higher end of the product line released are the 42-inch LD4235 and 47-inch LD4735. Made for 24/7 continuous use, the screens also support features like network management, lock-out features for extra security, video-over-Ethernet to reduce wires, and a built-in USB media player. These displays are expected to be available in North America some time in February.