The CBC reached 86 per cent of the Canadian population with its broadcasts of the World Cup – but not everyone was watching it on TV. To capture a fragmented audience watching games on smartphones, tablets, and the web, CBC tapped Adobe Analytics to get a real-time picture of where and how its audience was tuning in – and it had the ability to change programming on the fly as a result.

While millions of Canadians were glued to CBC’s streamed video coverage of the Sochi Olympics and FIFA World Cup this year, the broadcaster’s manager of digital research Greg Dinsmore had his eyes trained on them.

With the help of Adobe Analytics, Dinsmore was able to watch the watchers. He got a comprehensive dashboard view of how Canadians consumed CBC’s digital coverage of both global events, across multiple devices, in near real-time.

“We managed to get minute-by-minute reporting,” says Dinsmore, at CBC headquarters in Toronto. “It would allow us to show the audience (metrics) and produce an audience graph… almost 24 hours before the TV data would come in.” 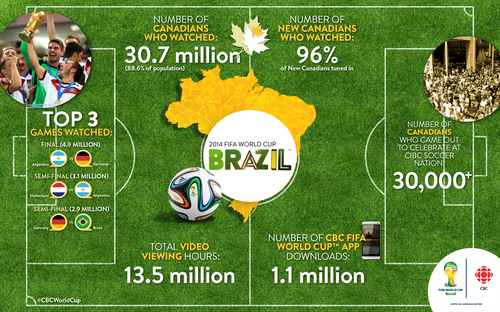 In fact, Adobe Analytics’ video heartbeat feature can provide viewership metrics from a video every 10 seconds while it’s being played. Data generated from each video includes how many people watched it, how many watched it until the end, the number of abandoned viewings, the point at which they stopped watching and what kind of device they viewed it on.

That last metric – device type – is key today as content is increasingly consumed on devices other than TVs, says JD Nyland, director of product management at Adobe Analytics. He cites in-house Adobe research indicating that 71 per cent of online video and TV content is now consumed on Android or iOS devices.

CBC’s own figures seem to lend credence to this trend. Viewership of its 2014 World Cup video content on non-TV platforms jumped by 51 per cent compared with the 2010 tournament. Almost 14 million hours of CBC’s streamed Sochi content was consumed online, nearly doubling online viewership from the 2010 Vancouver Olympics. 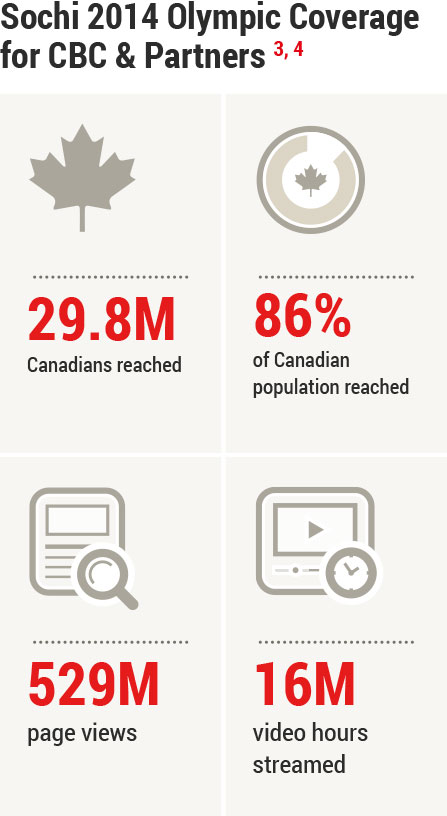 “This will allow (content) publishers and broadcasters to deliver content to users on the right device at the right time that will keep them engaged,” says Nyland.

That applies to digital advertising content as well, he adds. While a video is still streaming live, both advertisers and content providers can switch gears to tailor or change their content based on the analytics data they receive in almost real time, he explains.

“You can see the level of engagement as people interact with the video or the ads,” Nyland says. “(Programmers and sponsors) are able to make decisions even quicker to the point where they can even change the content or order of the ads during the game.”

Dinsmore doesn’t disclose whether CBC changed any live Olympic or World Cup coverage based on analytics data, but says the information was there for producers if they wanted it.

“That data was part of the conversation,” says Dinsmore. “How (producers) used that was up to them. But it gave them a first look at what was actually happening.” 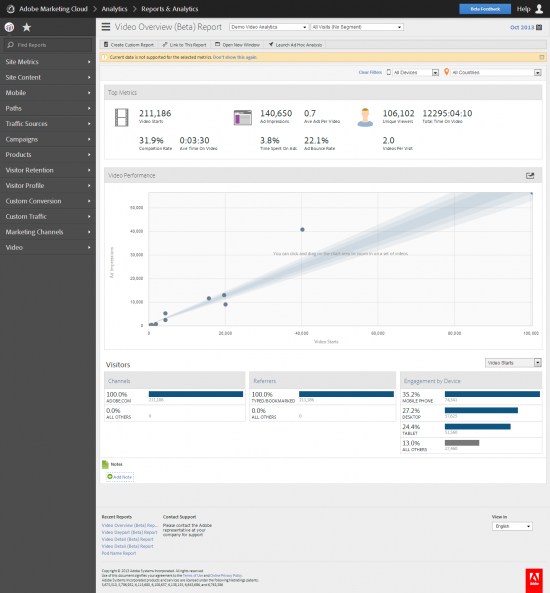 That “first look” at big data allows sports broadcasters to adopt a predictive strategy: if a certain event or player boosts video consumption, they can highlight them again in current or future programming.

Beyond predictive programming lies personalization. Rather than tailoring content to fit overall viewing patterns, broadcasters can push out content that uniquely fits each individual.

“We allow customers to take that data and use it to then drive action, like target other visitors that look like the ones coming or provide personalized experiences,” says Nyland.

Analytics is no magic bullet for digital content producers and advertisers. Dinsmore says analytics was just one tool used in conjunction with social media monitoring and traditional TV ratings to paint as complete a picture as possible of CBC’s audience during Sochi and World Cup 2014.

Broadcasters must also adjust their data analysis based on demographics, timing and platform, says Adrien Mak, a consulting and deals partner in the systems integration and information management unit at PricewaterhouseCoopers in Toronto.

“A lot of people don’t spend enough time analyzing the quality and completeness of the data before they perform their analysis,” says Mak. “If it’s missing gaps in time or it’s collected from a subset of set top boxes or whatever, you get a skew in the data. Is that statistically relevant or are there holes in the data?”

A new partnership may help plug some of those data holes. Next year, Adobe and Neilsen will launch what they call the “first comprehensive, cross-platform system for measuring online TV, video and other digital content across the web and apps.” It aims to standardize analytics collected from desktops, smartphones, tablets, game consoles and over-the-top boxes.

Back at CBC, Dinsmore points out that the public broadcaster isn’t new to big data. It formerly ran its own in-house analytics program that generated data on live streaming video content every two minutes. But it put a lot of stress on CBC’s server load, making it costly and complex to run. Switching to Adobe’s cloud-based solution cut CBC’s implementation and server costs by about 10 per cent.

Analytics can process more data faster than ever before. As big data gets even bigger, however, Dinsmore warns users to focus on data that’s relevant to their business – and tune out the rest.

“It’s very hard to stay on top of,” says Dinsmore, “and not getting lost in the noise is very difficult.”

In other words keep your eye on the ball — or in this case — your audience.

Christine Wonghttp://www.itbusiness.ca
Christine Wong has been an on-air reporter for a national daily show on Rogers TV and at High Tech TV, a weekly news magazine on CTV's Ottawa affiliate. She was also an associate producer at Report On Business Television (now called BNN) and CBC's The Hour With George Stroumboulopoulos. As an associate producer at Slice TV, she helped launch two national daily talk shows, The Mom Show and Three Takes. Recently, she was a Staff Writer at ITBusiness.ca and is now a freelance contributor.
Previous article
Concur partners with Air Canada to account for ‘rogue travellers’
Next article
Canadian Tire money enters era of mobile payments