Luc Bohunicky, the vice president of business development at Ukko Robotics, knows how hard it is to operate a startup without financial backing and a support system. Ukko Robotics was operating out of a garage in the boonies until a loan from Futurpreneur Canada allowed it to move into a warehouse in the heart of Winnipeg’s business centre.

This not only provided Ukko Robotics with a much more feasible workspace, but also allowed it to gain much easier access to the resources it required, and added legitimacy to the company, said Bohunicky.

“This business is literally a product of its environments because right now we are walking distance from a prototyping and fabrication lab. We are walking distance from a plethora of coffee shops, which allow us to have easy access to meetings. We have 4,000 square feet of office space in the center of the city to allow us to build our business. And we’re just accessible from a business building perspective; to attract employees, partners, and mentors,” said Bohunikcy. “So to imagine life without the support of Futurpreneur would have definitely delayed our ability to build the business for those reasons.”

Ukko Robotics is a technology firm based out of the Winnipeg that specializes in the design and development of agricultural technology that facilitates autonomous and energy-efficient farming equipment.

Its biggest innovation is the Rova; a self-sustaining, self-moving, mobile-monitored chicken barns. By using the app, you can not only have a live video feed of your barn but also monitor essential metrics (like weather reports and feed levels) and even map out where you would like your barn to move to.

Futurpreneur, which was established in 1996, supports entrepreneurs between the ages of 18 and 39 by providing low-interest loans, mentorship opportunities, and vast networking options.

It has supported over 12,000 young entrepreneurs and helped facilitate the creation of 10,000 businesses, as of Dec. 1, 2018. The 2019 federal budget earmarked $38 million dollars over the next five years for the continued support of entrepreneurs in Canada through the not-for-profit organization. 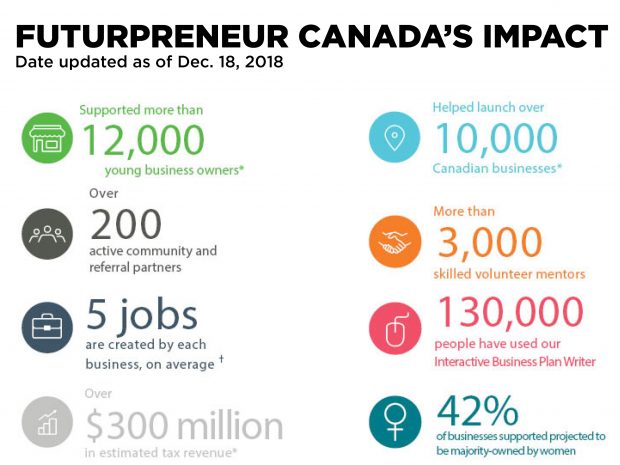 Despite Canada being ranked as the third best country for entrepreneurship, according to Statistics from StartUpBlink, Karen Greve Young, the chief executive officer for Futurpreneur, says that if Canada wants to achieve its economic goals, continuing to push the entrepreneurship agenda further by creating opportunities for young innovators to thrive is essential.

In fact, according to stats from Industry Canada, 77 per cent of private jobs in Canada are created through small businesses.

Futurpreneur has partnered with many tech startups, including Winnipeg-based food delivery app Skip The Dishes, and Young says that technology entrepreneurship can be especially impactful, not only within Canada but also on a global scale.

“Part of why entrepreneurship is important are scaling ventures. And they’re often scaling tech ventures, who are often but not always based in big cities, who actually can create tons of jobs and tons of export income, which is obviously a value,” said Young. “Where I get very excited are the technologies where it’s not competing to be a leader on the tech platform, but it’s more contributing to global well-being and people’s experience.”

The benefits of a partnership with Futurpreneur extend far beyond the financial impact of a low-interest loan; as they also provide extensive mentorship and networking connections.

This continued support for entrepreneurs is especially valuable, as no matter the financial backing, many startups can fail without a proper support system in place.

According to stats from Industry Canada, 150,000 small businesses are established in Canada each year, but only 51 per cent of those same businesses will survive longer than five years.

For some, including JP Desjardins, the founder of Montreal-based social display firm The Wallrus and Montreal-based digital marketing firm Orangerine, the greatest value lies with the mentorship and networking opportunities.

“They have a really good network of mentors across Canada. So we were able to have someone that was in the IT world that helped us grow our business…And having a mentor has proven to help a lot,” said Desjardins. ” And then in the year afterward, they started inviting us to these events that they have in different cities. And that’s where you start meeting entrepreneurs from all across Canada and build a really deep network. And that, in my opinion, is where the long-term value really is in the organization. It’s the power of a network.”

For Desjardins, it does not matter what you are selling if you cannot get that product or service in front of the right people, something Futurpreneur provided for him.

“It’s extremely valuable, because in the end, whatever you sell, being able to get into a meeting with those companies that might need your product…it’s a very big lever to help you succeed and grow your company,” said Desjardins.

Buckley Smithhttps://www.itbusiness.ca
Staff writer for IT World Canada. Covering the world of technology as it applies to business. Buckley is an avid sports fan who loves travel, food, and music. Can be contacted at bsmith@itwc.ca or 416-290-2000.
Previous articleZoho launches e-commerce and marketing app suites, plans to expand into Canada
Next articleHashtag Trending – Apple engineer speak out about tough border searches; Google partners with Intel for hybrid cloud; Spotify’s Google Home mini giveaway

ITAC puts forth suggestions for ICT industry in 2019 federal budget

Despite surge of female entrepreneurs in Canada, STEM still lagging behind