Dreamforce retrospective: a look back at 5 years covering the marquee event for B2B cloud software

This will be my sixth year in a row attending Salesforce.com’s Dreamforce event, a mega-conference that takes over downtown San Francisco for one week every year in autumn.

Known as the world’s largest conference held by a single vendor, this year estimates of 150,000 attendees have been bandied about. The Bay Area is now booked so over capacity that Dreamforce organizers had to rent a cruise ship to house attendees. The Moscone centre itself, that hosts the meat of the conference, is designed for events much smaller than this. When the general sessions take place in the 30,000-seat hall, every seat is filled and still thousands more watch it broadcast on screens in overflow rooms, or while sitting on bean bag chairs dumped into the hallways.

The size and scope of Dreamforce extends beyond what Salesforce will announce. The conference has become the marquee B2B software conference, a must-attend for those in the industry. Thanks in part to Salesforce’s effort to build a platform that other cloud vendors are open to integrate with, and also in part to the countless B2B buyers that will peruse the multiple exhibitor hallways, Dreamforce itself represents a huge sales opportunity.

If you’re heading to Dreamforce for the first time, be sure to read my survival guide before landing on the ground in San Francisco. As I fly to the conference myself, I’m looking back on my reporting from the event over the years to see how Salesforce has developed as a company, and reflect on what other developments there are still resonating in the B2B software space today.

Presenting itself as a cloud development platform, Salesforce announces the acquisition of San Francisco-based Heroku. The move brings hundreds of cloud apps and a Ruby on Rails code-base platform under the wing of Salesforce, which previously was known for catering to line-of-business workers. Salesforce CEO Marc Benioff says that Ruby on Rails, which built web darlings such as GroupOn, Hulu, and Twitter, will be a popular cloud development platform into the future. A look at today’s healthy app market in the Salesforce eco-system shows he was right.

Salesforce takes its own backend infrastructure and spins it off into a generally available database-as-a-service offering with the launch of Database.com. Making the service available to developers and allowing them to call on it with mobile-friendly REST architecture would prove to be an important piece of what is known as the Salesforce.com platform today.

Following the acquisition of Fredericton, N.B.-based social media listening software Radian6 in March 2011 for $326 million, the company is still operating independently from Salesforce at this point. Radian6 CMO David Alston says the company is contributing to Salesforce’s strategy to place a strong emphasis on integrating social media into its products.

“Before the acquisition we had a race car that was just flying along,” Alston said. “Now we have a race car powered by rocket fuel.”

The bigger picture for Canadian acquisitions Radian6 and the more freshly-purchased Rypple becomes clear. Rypple is rebranded to Work.com, put forward as a social approach to managing employees. The acquisition, made in December 2011, comes with Rypple founder Dan Debow, who becomes the vice-president of Work.com at Salesforce. As for Radian6, it will be part of the new Marketing Cloud product announced.

On the show floor, the founder and former CEO of Eloqua, Mark Organ, is now at the booth of his second Toronto-based marketing software startup in Influitive, promoting the launch of its AdvocateHub cloud software aimed at B2B marketers. Eloqua, also at the show, is one of the first customers for this new category of solution, which helps companies accomplish more word-of-mouth marketing through the help of their best customers.

A team of three students from the University of Waterloo take part in a “hackathon” contest that takes place at the event, offering a top prize of $1 million. There’s some controversy among participants about the winners selected and whether they worked on development of their app before the time at the conference began. But the Waterloo trio is happy to have been flown out by Salesforce to participate in the contest, and appreciates that Adam Seligman, vice-president of developer and partner marketing at Salesforce, allowed them to stay in his home during the conference. 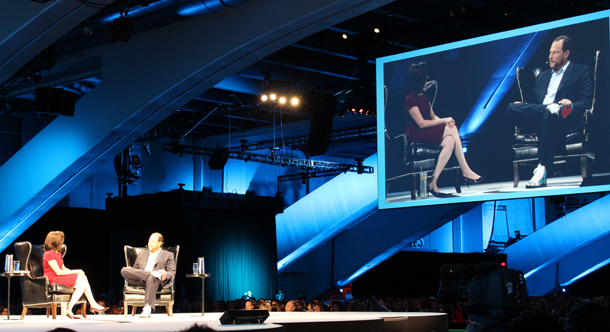 Benioff interviewed tech-industry luminaries on stage in a series of fireside chats, including Facebook’s chief operations officer Sheryl Sandberg, who spoke about her book Lean In and the resulting movement among women empowering themselves in the workplace and seeking equality to men – especially in company leadership positions. Yahoo’s CEO Marissa Mayer talked about her effort to redesign the web brand as a mobile-first company. Also, Dropbox founder Drew Houston reflected on a trip to visit Steve Jobs at Apple headquarters and being courted for a possible acquisition.

Wearables are one of the main themes of this Dreamforce, with a new Salesforce Wearables division being headed up by Debow. Taking part in the program, and exhibiting in the wearables zone, are Canadian startups Thalmic Labs and Bionym (now known as Nymi). Nymi shipped its first hardware to developers – a wristband that reads the rhythm of your heartbeat and puts it to use as proof of your identity for a variety of applications. Thalmic showcases that its armband, that enables a gesture interface for computing, has practical uses being paired with smart glasses by APX Labs and sold as a solution to field workers.

At this year’s Dreamforce, the focus will be on a big overhaul to the Salesforce CRM and other legacy cloud apps with the new Lightning design. We’ll likely get our first good look at it in action.

As well, Microsoft CEO Satya Nadella is slated to deliver a keynote speech. While Microsoft’s Dynamics suite has long rivalled Salesforce, Microsoft and Salesforce have publicly collaborated since Nadella took the helm at the Redmond-based software giant. We’ll see if his inclusion at Dreamforce is parcelled with any deeper partnership between the firms. Follow ITBusiness.ca and ITWorldCanada.com all week for updates.

Here’s an infographic from Salesforce highlighting some Dreamforce 2015 numbers: 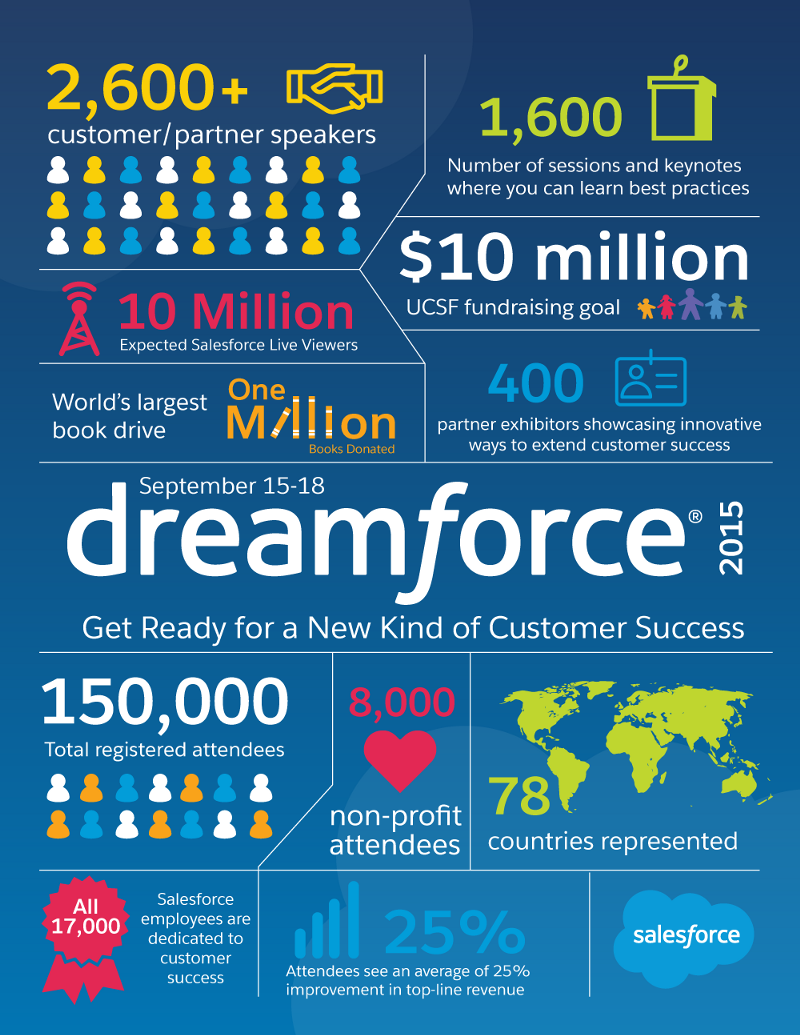 Brian Jacksonhttp://www.itbusiness.ca
Editorial director of IT World Canada. Covering technology as it applies to business users. Multiple COPA award winner and now judge. Paddles a canoe as much as possible.
Previous articleHealthcare the largest opportunity in wearables market
Next articleUber releases ‘Business Profiles’ to simplify expenses

‘We promise we will work with everybody’ says Salesforce CEO