Complaints continued to rise in 2018, wireless service is biggest culprit, according to CCTS

For the third consecutive year complaints regarding Canadian telecom and television services are on the rise, according to the 2019 mid-year report released today by the Commission for Complaints for Telecom-television Services (CCTS).

The CCTS is a national organization which independently handles complaints consumers has with telecom and television providers. Its objective is to provide a fair and free avenue for consumers to access if they find their complaints are not being properly resolved by the customer service of their provider.

While they saw a dip in complaints for a couple of years, said CCTS Commissioner Howard Maker, in the three years since they have seen those numbers rise, with a 73 per cent increase in the 2018 mid-year report and a 44 per cent increase this year; accounting for a total of 9,831 complaints.

The biggest issues consumers faced were incorrect charges and non-disclosure issues which often resulted in a discrepancy between what consumers expected and what they were actually billed; which combined accounted for 29 per cent of the complaints received. 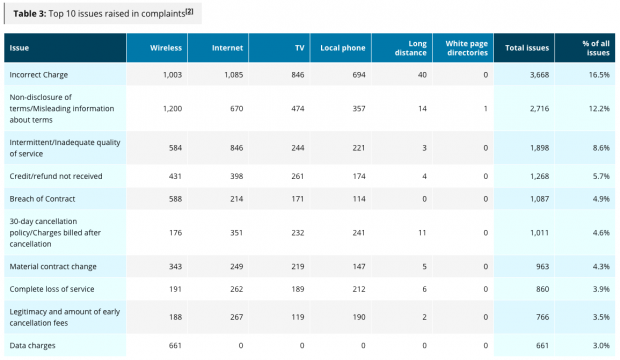 Non-disclosure is an issue that the CCTS recognizes as an important point that needs to be addressed and acknowledged that it is something they are working towards correcting.

“This report shows that disclosure issues continue to be problematic,” said Howard Maker in a press release. “We were pleased to provide vital data during the CRTC’s recent review of telecom sales practices. Our identification of a ‘mismatch’ between what many customers think they are buying and what they are getting is the focus of the CRTC’s report.”

Although the “Big three” service providers (Rogers Communications, Bell Canada, Telus Corporation) continued to comprise a majority of the complaints, two smaller providers (Cogeco Inc. and Freedom Mobile Inc.) made the top five (which accounted for 60 per cent of the complaints).

Maker says he believes the reason Cogeco appears on this list is its recent change in network and a lack of preparedness in its support staff to handle that switch.

“I think this is what started the ball rolling. I think that they didn’t foresee the challenges that they wound up encountering and more customers were impacted,” said Maker. “And it took them longer to try and get things sorted out with their customers. They couldn’t handle all the level of inquiries and so all that frustrates consumers even more and many of them wind up coming to us.”

Despite the consistent rise in complaints, the CCTS has continued to resolve most of the issues they handle; boasting a 92 per cent resolution rate.

Maker noted that the recent rise in complaints may not be related to any change in service quality, but may instead be due to a greater awareness of the services that the CCTS provides, which has led to consumers more often taking advantage of this avenue for resolution.

“I think there’s a lot of factors that contribute to increases in complaints and certainly one of them is an increase in public awareness about the service that we offer,” said Maker. “The CRTC (the Canadian Radio-television and Telecommunications Commission) recently did some public opinion polling and 30 per cent of customers were aware of us without doing any research and so we think that’s really good.”

Buckley Smithhttps://www.itbusiness.ca
Staff writer for IT World Canada. Covering the world of technology as it applies to business. Buckley is an avid sports fan who loves travel, food, and music. Can be contacted at bsmith@itwc.ca or 416-290-2000.
Previous articleHashtag Trending – Gmail adds scheduling; New TSA tech; New robot helps disabled
Next articleForeign talent more interested in Canadian IT jobs, Indeed reports

Number of telecom complaints increased in 2017 after a 3-year decline, CCTS...