Canada’s telecommunications giants continued to lead the country’s IT sector in what turned out to be another record-setting year for the industry, with Bell Canada owner BCE Inc., Telus Corp., Rogers Communications Inc., and Shaw Communications Inc. all among 2015’s top-earning Canadian ICT companies, according to a new list released this week by Ottawa-based technology consulting firm Branham Group Inc.

“That is a remarkable total,” Branham researchers wrote in a report analyzing the results of its study, which was released on April 20. “This is the sixth consecutive year the Top 250 recorded growth and set record revenues.”

According to Branham, the top 10 Canadian ICT companies of 2015 were:

Bell, which overtook BlackBerry as the top ICT Canadian ICT firm in 2014, maintained its position for the second year in a row. The company’s growth rate was substantial as well: in 2014, its revenue grew five per cent, but in 2015 grew by 15 per cent.

Branham’s researchers noted that Bell’s achievement was especially impressive considering the company’s market: “It faces strong competitors and operates in an established business, selling products and services that are tough to differentiate,” they wrote.

Meanwhile BlackBerry, which has had greater luck in software services than with its handset division recently – leading its CEO to openly consider leaving the market entirely – saw its revenue drop from $8.7 billion in 2014 to $4.3 billion in 2015.

The top 25 multinationals were also led by familiar names, with the Canadian divisions of IBM Corp., Google Inc., HP Inc., Cisco Systems, Inc., and Microsoft Corp. at the head of the pack.

It should be noted that in addition to analyzing the revenues of individual businesses, Branham divided the top 250 Canadian ICT companies into other lists, including one by region and several by sector.

The majority of Canadian ICT activity takes place in four provinces, the organization found, with all but eight of Canada’s top 250 ICT companies located in either Ontario, British Columbia, Quebec, or Alberta, and the four provinces collectively representing 98 per cent of revenues earned by the top 250. 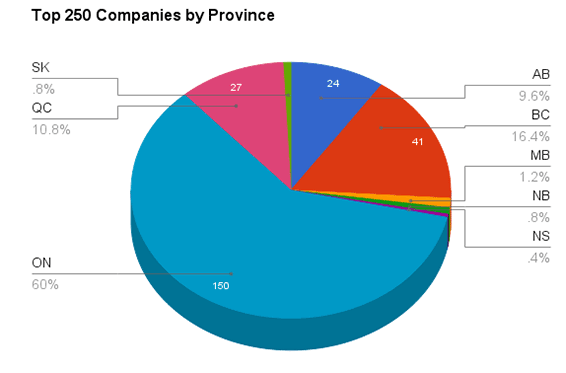 The top 25 up and comers reflected this trend, with 19 of them, including Wealthsimple and AlayaCare, hailing from Ontario, three from B.C., two from Quebec, and one (landlord-tenant matchmaker Zora) from Halifax.

Eric Emin Wood
Former editor of ITBusiness.ca turned consultant with public relations firm Porter Novelli. When not writing for the tech industry enjoys photography, movies, travelling, the Oxford comma, and will talk your ear off about animation if you give him an opening.
Previous article
Technology and dance fuse together in Steer
Next article
3 guidelines for creating more effective ads on Facebook and Instagram