Salt Lake City – Typically the new product features demonstrated on stage at a major conference like Adobe Summit are well-polished, fully tested and ready for deployment. But that’s not the expectation at the Adobe Sneaks session, which previews beta versions of new features that may or may not be included in future product updates.

Now a regular feature at both its Creative Cloud conference (MAX) and its Marketing Cloud conference (Summit), Adobe uses feedback captured from its audience during the presentation to help determine where it might focus its energy on development. But the exercise isn’t entirely a serious affair, with a celebrity comedian or actor usually helping co-host the series of product demos. This year, Wayne Brady filled the role of comedic relief for the audience of marketers.

From a Siri that answers questions about enterprise data, to tracking customers as they move about in-store, and automatically tagging new photo assets, Adobe employees pitched their features in hopes of winning some favourable tweets from the discerning crowd of customers. 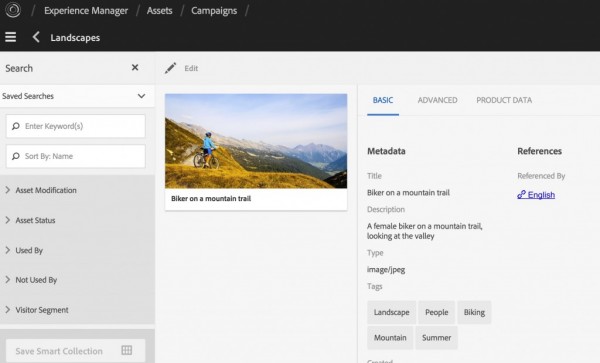 Anyone that’s ever worked with a content management system knows about the inherent problem with managing photos. While a human eye can easily identify the qualities of a photo in a fraction of a second, trying to search for that image using a text-based tagging system is difficult. People managing such content spend a lot of time adding text “tags” to the images so they can be found for future use.

“At Adobe we know images, that’s one of our specialties,” Mathis says. “So we’ve created some advanced algorithms to actually look at your images.”

SmartPic compares a newly uploaded image to what is already uploaded and available in stock imagery. Then based on similarity to other images, it will apply tags for you. So a picture of a summery scene will be labelled as “summer” and one with a bicycle in it could be tagged “bicycle.” The more you use the feature, the better it gets at tagging.

SmartPic doesn’t stop there – it also lets you track your image assets and organize them based on what campaigns they’re being used in and how they are performing in those campaigns, even across specific audience segments.

Brady was impressed by the demo. “Why don’t we have that now?” he said. “It would make life easier.” 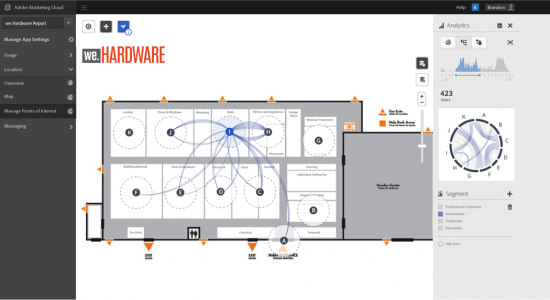 Marketers have got used to the concept of tracking customers as they move through their websites, identifying popular pages and points where they might exit the experience. But that sort of practice isn’t often applied to physical retail locations yet, because of the problem of measuring where people are in the store.

Brandon Poyfair, a product manager for Photoshop at Adobe, presented a possible solution on stage. Using Home Depot as an example brand, Poyfair showed a 3D map of the store that customers can interact with via a mobile app. That same app will communicate with in-store Bluetooth beacons (if the customer opts in) so marketers can collect information on how the shopper moves through the store. Mobile Reality can aggregate that data dn then represent it on the map of the store.

“This new ability to bring these two worlds together is a very powerful tool and it’ll help us to analyze, segment, and take action with our customers,” he says. Imagine being able to send a service rep over to someone who’s been dwelling in the vanities aisle for 10 minutes, for example.

Brady suggested that Adobe could use the new feature to understand its own event better.

“You really can break down the human equation by using the numbers,” he said. “That’s witchcraft.” 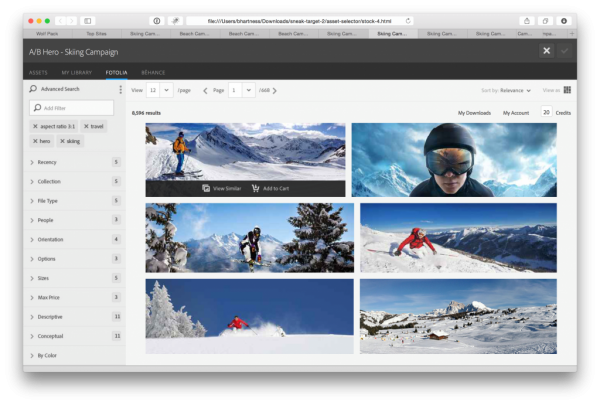 Any marketer that has spent countless hours browsing through stock photo options and then deploying them for various campaigns will appreciate the efforts being made here. Carmen Sutter, product manager at Adobe Social, demonstrated a new feature that will help track visual assets based on metadata, usage rights, campaign association, and effectiveness.

The idea is that marketers could source a new image – from an internal database as well as third party providers of stock imagery (specifically, Fotolia), and plug them into a landing page for an A/B test. Those same assets can then be shared with other team members using Adobe’s core service.

“Not only can I use the image I just purchased in my landing page, but my social media team can use that same image with the Adobe Social media app,” she explained.

Brady piped up when Sutter was choosing her image for a mock-up page that would market ski gear.

“What’s wrong with a brother on a bobsled?!” he said. “I think you should swap that image.” 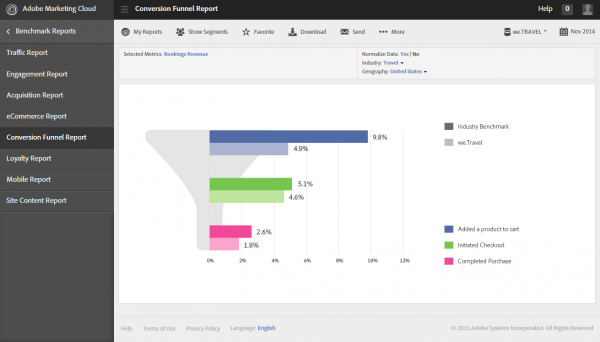 Tamara Gaffney, principal analyst for the Adobe Digital Index took the stage and pointed out something that might make some marketers uncomfortable – businesses often judge their success based on data in a vacuum. While setting goals and then measuring results is a good practice, celebrating the fact that you exceeded those goals might not be deserved if the industry on average did much better than you.

In an on stage example, Gaffney imagined a travel company that saw an 18 per cent growth rate during a specific week. That sounds great at first, but if you compare it against the industry average growth rate of 20 per cent for that same week, it shows that company could have done even better. This comparison is made possible by Adobe taking its customer data, anonymizing it, and then allowing its customers to see their own results against the industry average, using it as a benchmark.

Brady was impressed with the demo and imagined it could also be useful to help one’s dating life. “A guy could think he’s the best, spraying on Axe every day, then he could use this and find out he’s not the best. That’s useful.” 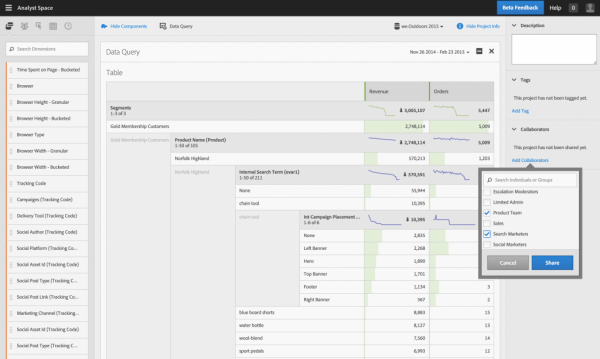 Ben Gaines, senior product marketing manager for Adobe Analytics, wants to make it easier for marketers to design complex queries into their data by giving them a drag and drop interface to do so. The idea is that marketers could design complicated data-pulls that would normally require some serious database skills or knowledge of Hadoop.

“I’m going to show you how there’s improv in analytics,” Gaines told Brady on stage. “This is going to become a framework upon which we can build other data science tools.”

Gaines and his team have written a new query language to make sure the data populates on queries made in just a few fractions of a second. The reports deliver visual results with line graphs, bar graphs, or pie charts as the data demands.

Unlike the other sneaks, this feature will be available to Analytics users as a public beta late next week, Gaines says. 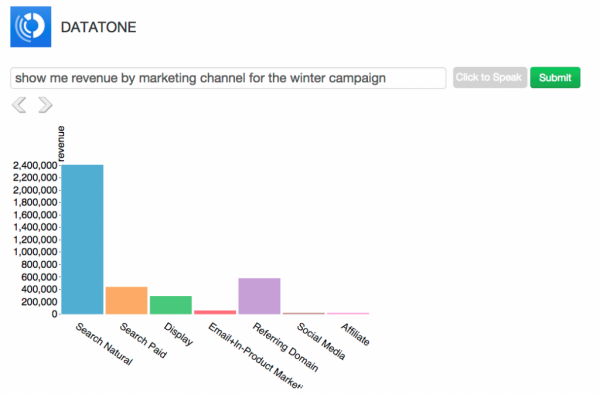 If you’ve ever wished you could just ask Siri about whether or not you have enough inventory left to meet a weekend of shopping demand, well – now you can, sort of. Mira Dontcheva, research scientist at Adobe, has developed a natural language interface for getting data out of the Marketing Cloud that can be used through a browser or mobile device.

On stage, Dontcheva asked DataTone to “show me revenue by marketing channel” and it responded with a set of visuals doing just that. The feature can track your previous queries so it understands the context of what you might ask next, she says.

Brady liked DataTone, seeing it as an improved Siri.

“Like everyone here uses Siri, sometimes its a crapshoot what you get,” he said. “The fact that was so spot on and it has a narrower focus is incredibly impressive.”

Brian Jacksonhttp://www.itbusiness.ca
Editorial director of IT World Canada. Covering technology as it applies to business users. Multiple COPA award winner and now judge. Paddles a canoe as much as possible.
Previous article
4 lessons Wattpad has learned about marketing to millennials under age 25
Next article
What Bieber and Blue Rodeo can teach you about marketing your videos