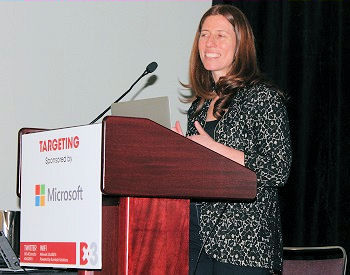 TORONTO – Millennials under age 25 are a sought after and difficult to reach demographic for marketers. Attendees at the Dx3 digital marketing conference got some tips Thursday on how to reach these elusive young consumers.

In her presentation How to Market to Millennials in the Digital Age, Candice Faktor shared her experience around marketing to millennials under the age of 25 at Wattpad, a Toronto-based company with an online community for writers and readers that skews heavily to the younger end of the millennial spectrum.

Millennials go up to age 35, but Faktor said she’s separating out the age 25 and younger because that group is so different from the first half of the millennial generation. They’re the pure digital natives.

“It’s not that you embrace technology, and that you don’t know a world without mobile, social media and smartphones,” said Faktor. “It’s that you’ve grown up completely addicted to this avalanche of information. It’s harder to focus. You have lower attention spans. You don’t have a lot of bandwidth to focus on something because there’s so much going on.”

At the same time, Faktor said entrepreneurship is in the DNA of the millennial. They believe they will create their own future because they have the tools to create music, stories, apps, whatever they want. It also changes how they think about entertainment – it’s been described as the maker movement.

“For the millennial, entertainment is not a lean back experience,” said Faktor. “They can’t just sit back and watch. They need to participate and be a part of something.”

Wattpad has 40 million visitors from around the world every month with 100,000 joining every day; 80 per cent are under age 25. They read serial stories from amateur authors, and comment and interact with the writers. Fan fiction involving boy band members is a popular genre. Wattpad is the hub, but stories are also shared and talked about on Instragram and other social networks. And anonymity is the norm.

Stories aren’t just read; people write their own, so the barrier between consumption and creation fades away. And Faktor said Wattpad also lends itself to overcoming the lack of attention span issue with younger millennials.

“You can’t take it in a bite size. It’s an immersive experience when you’re hooked on a narrative. It’s extremely hard not to read the next chapter,” said Faktor.

Wattpad has tried a number of ways to link its highly desirable millennial user base with marketers that want to reach them, and has learned some lessons along the way.

What has Wattpad learned from these experiences? Faktor has four key takeaways for marketing to younger millennials:

Jeff Jedras
Jeff Jedras is a technology journalist with IT World Canada and a member of the IT Business team. He began his career in technology journalism in the late 1990s, covering the Ottawa technology sector for Silicon Valley North and the Ottawa Business Journal. He later covered the technology scene in Vancouver before joining IT World Canada in Toronto in 2005, covering enterprise IT for ComputerWorld Canada and the channel for Computer Dealer News. His writing has also appeared in the Vancouver Sun & the Ottawa Citizen.
Previous articleHow the NHL is taking content-based marketing and partnering beyond video
Next articleAdobe gives sneak preview of upcoming Marketing Cloud features

Shopify’s Tobias Lütke and other tech CEOs chart a path to scaling...

Toronto mayor pitches city as a startup to CityAge conference