One fated morning I woke up and started my routine as per normal. I put on a pot of coffee, chose my clothes from my wardrobe for the day, and went to grab my smartphone from the charger. When it refused to turn on, my routine was suddenly off the rails.

Like many of you, I find it hard to imagine going about my day without a smartphone in my pocket. Even though I’ve only owned one for about seven years now, going back to life pre-smartphone is a bit inconceivable – especially considering I’m the editor of a technology news website. So with a dead brick of a phone on my hands, I quickly polled my friends and conducted some online research to decide what my replacement would be.

The phone I settled on was a Nexus 5. Not only were the online reviews good and the price very reasonable for this calibre of device, but everyone I know who owns the phone is a big fan of it. The Nexus 5 is now the phone that I often recommend to people when they ask my opinion on what to buy. While I don’t think it’s the best phone on the market – Android or otherwise – I do think it’s the best value available. Plus, always having access to the latest Android version as soon as Google releases it is really worthwhile.

Related
How to help Google Now read your mind

After realizing I was the third person in my office to own a Nexus 5 and I know a couple friends with the device too, I started wondering how my peers configured their device. Setting up a new smartphone with your preferred settings, apps, and peripherals is like working in a new pair of jeans to fit you just right. Everyone’s got a different feel for what’s comfortable and how they want things to look.

So we’re sharing five different setups on the Nexus 5 in a series of articles. The goal is to learn some productivity pointers that we might adopt to improve our own smartphone experience, and to hopefully get some pointers from you as well. 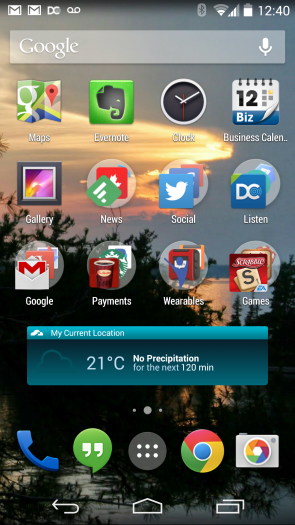 I prefer to organize my apps into named folders that I can quickly access from the home screen as opposed to spreading icons out on multiple home screens. You can see in the screenshot below the folders I’ve named News, Social, Listen, Google, Payments, Wearables and Games. There’s also a few apps that I use often enough that I just want them to be immediately accessible from the home screen, which include Business Calendar, Evernote, Clock (for the timer function), Google Maps, Evernote, and the Gallery to look at my photo collection.

The one widget I have on my home screen is for SkyMotion, which I’ve found to be the most useful weather tool for a mobile device. It detects your location from GPS and delivers a very accurate prediction on when it will rain, down to the minute. The forecasts are good for up to two hours in advance, so you know when you leave if you’re going to be caught in the rain or not. If it’s already raining, you’ll know how long until things clear up. I’ve impressed a few friends already by predicting with confidence “it’s going to rain in five minutes exactly” and then feeling the drops start falling right on cue.

I do have an overflow pool on my second home screen. There’s not too much rhyme and reason to this area other than these are either utility apps I want to access once in awhile, or they are apps I’ve downloaded to test out and review and they live here temporarily. If I have an e-book on the go, Kobo gets promoted to the home screen. But right now I’m reading a book printed on dead trees.

This new category of mobile device has made its way into a prominent place on my home screen with the Nexus 5. While I’ve owned a Pebble smart watch for awhile, it didn’t’ work properly with my last smartphone, so I hadn’t been using it. The better Bluetooth support on the Nexus 5 meant I could finally join the Internet of Things revolution and strap this thing to my wrist.

I was also the proud owner of a Fitbit for a few months before laundering it one too many times and ultimately just losing track of its location, so I don’t have any apps dedicated to that device on my Nexus 5.

Still, the Pebble has given me a whole new way to interact with my smartphone and receive information from it in a convenient and accessible manner. I’m still experimenting with what Pebble apps are the most useful. So far I’ve been a fan of Wristponder, which allows me to set up some pre-baked SMS messages so I can actually respond in some situations to the messages I read on my wrist. Evernote is surprisingly helpful even in this micro-format when you just want to refer to a grocery list, and quickly looking at my agenda is also pretty handy.

Also, there’s lots of apps that replace at least the step tracking function of the Fitbit I tragically lost. 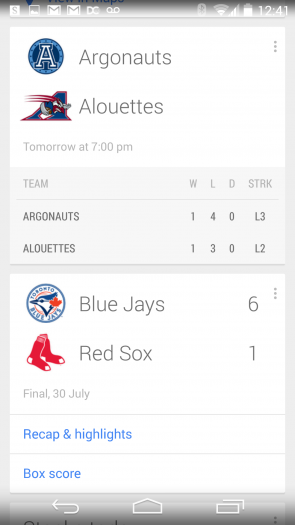 Baked in to the core Android OS on the Nexus 5 is a Google Now screen. You just swipe to the left from your home screen to access it. Here, I like to track my favourite sports teams to see what the score is in the game that’s currently on, or what the score was in last night’s game and the next time they’ll be playing.

Google Now also shows me how much time it will take to drive to work or to home at the times I’d usually leave for my office or to go home again. If there’s a major weather alert, that pops up here too. I have some stocks displayed, not because I’m invested in them but just so I can keep tabs on where the technology market is moving.

The great thing about this tool is the longer you use your phone, the smarter it gets about what information is useful to you. You can also just directly configure widgets to your liking.

I don’t do anything too fancy with advanced settings right now. I have an Epson Stylus printer compatible with Google Cloud Print, so I have my Nexus 5 set up as a trusted device and I can send documents to my printer via the Internet from any location I can get online.

Watch this space and we’ll be posting how my other friends and colleagues have set up their Nexus 5 devices. I’m curious to see what I’ll learn from their approach to personal productivity with a smartphone and implementing some of those tactics.

In the mean time, if you have a Nexus 5 or other device and a great set up that you feel makes you productive, we want to hear about it – so post your setup in the comments below.