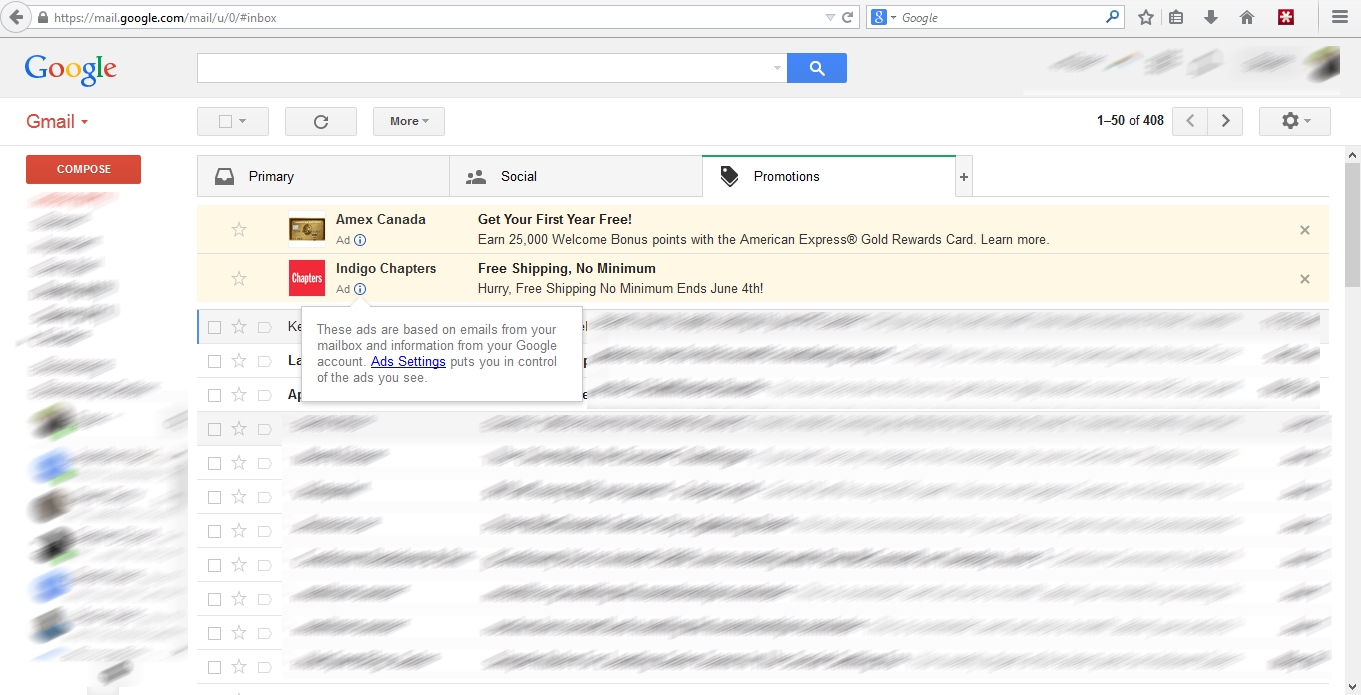 Google’s new “Sponsored Email” feature is being rolled out and tested slowly across many areas. The program has been in some states in the United States for at least a year, but now it’s coming to Canada.  Much like a “sponsored tweet/post”, it’s a type of paid advertisement disguised as a normal feature of the site.

While details are thin about what the final product will look like, early pictures show the ‘sponsored email’ sitting in the user’s inbox, and having the ability to be saved, deleted or forwarded. The project has been in development for a few years now, and it stands ready to completely change how direct email marketing works, if it doesn’t run afoul of anti-spam legislation first.

The difference between direct email marketing and spam is tricky to draw. I love the weekly newsletters I get from a number of community organizations around my city, but I couldn’t care less for the seasonal updates I get from Amazon telling me about their Father’s Day deals. To me, Amazon’s updates feels like spam, but from a legal point of view, it’s not.

Spam has historically been viewed as unsolicited email, and legislation aimed at stopping it has until recently looked at the ‘source’ of the problem. By asking the question, ‘where did you get that email address from?’ early efforts to legislate against spam have done so from a privacy perspective. Your email address was ‘private’ information, so a third party buying or selling that information was restricted.

Google’s new feature, ‘Sponsored Email,’ is a great idea to get around that issue. Now instead of needing to buy 10,000 Canadian email addresses and hope that some of them contain real live people, a company can in theory contact Google and ask for their mail to show up in 10,000 Canadians’ inboxes. The company never needs to have access to the email addresses, so no private information is shared.

The problem is that a new generation of anti-spam legislation is taking hold. Canada’s Anti-Spam Legislation (CASL) doesn’t tackle spam from a privacy point of view, but from a consent point of view. Under CASL, it matters less how you got the email address, and more that you had permission to contact it, and that’s a problem for Google’s new program.

Google’s sponsored email program, like ‘sponsored posts’ before it, is walking a delicate line of trying to blend advertisements into people’s use of the site. It also highlights the restrictions created by CASL. The more email-like the sponsored emails look and feel, the more effective they will be as advertisements, but the more likely users will be to rebel and more likely to run afoul of the new legislation.

Additionally, while it’s difficult to imagine a Twitter feed or Facebook page as being the type of ‘electronic address’ as described by CASL, your inbox is an area that is clearly intended to be protected. Google is going to need to tread extra carefully if it tries to move ads off of the sidebar and into Canadians’ inboxes.