Catherine Boivie at CES 2018: Google and some… unusual items

For my next blog, I’m not only going to talk about Google at CES but also describe some of the interesting devices I saw, ending with one that will help sick children. 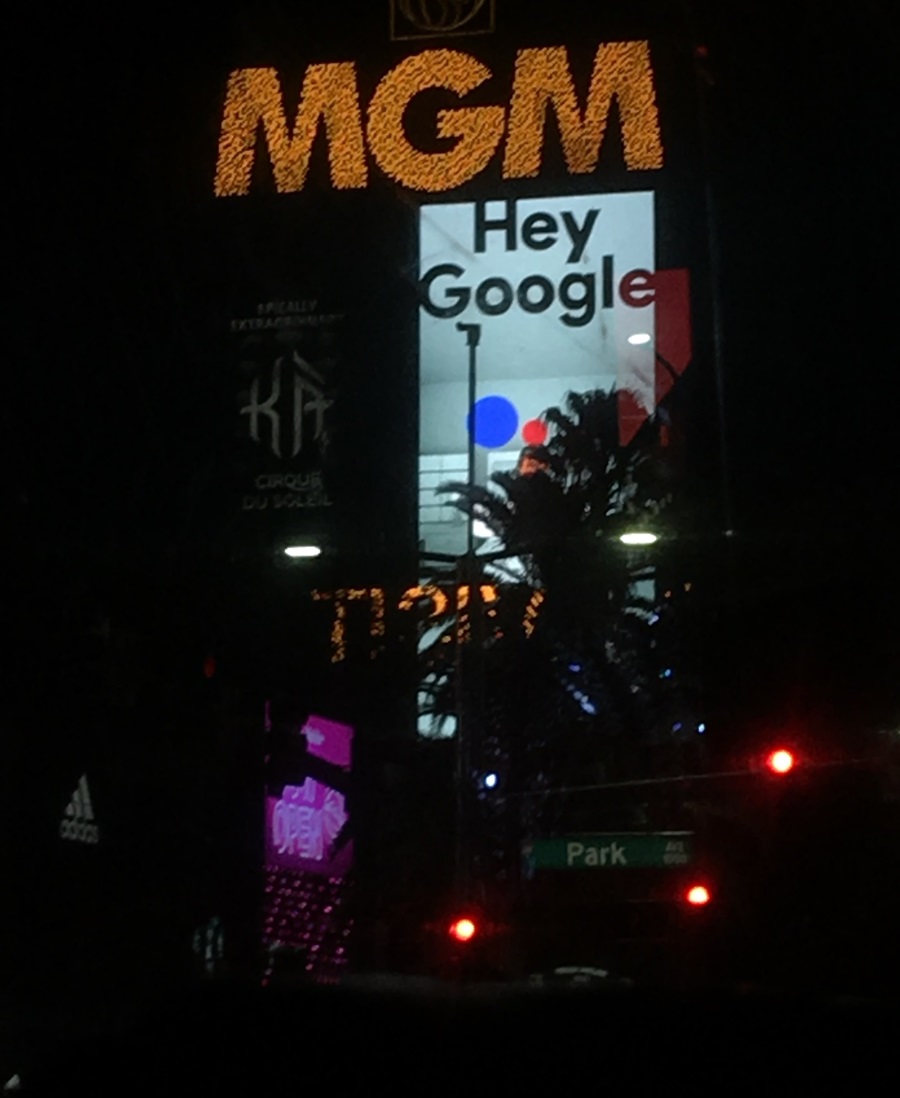 Although Google didn’t have an official booth at CES, its presence was inescapable. If nothing else, “Hey Google” ads (above) were continuously displayed on what seemed like on every screen across Las Vegas: you literally couldn’t walk for more than a minute before one of their ads accosted you.

There was also an army of (human) Google assistants, all wearing distinctive white overalls with the logo prominently displayed, wherever (the AI) Google Assistant was being used.

Then there was the giant Google-branded gumball machine (below). Attendees were invited to insert a huge coin and then prompted to ask Google one of four random questions. Then a “gumball” was dropped into the chute below, which attendees could open for a prize. Some won a printer, while others walked away with a hat or t-shirt. And all along the line for the machine were Google assistants in their white overalls holding up signs indicating wait times. 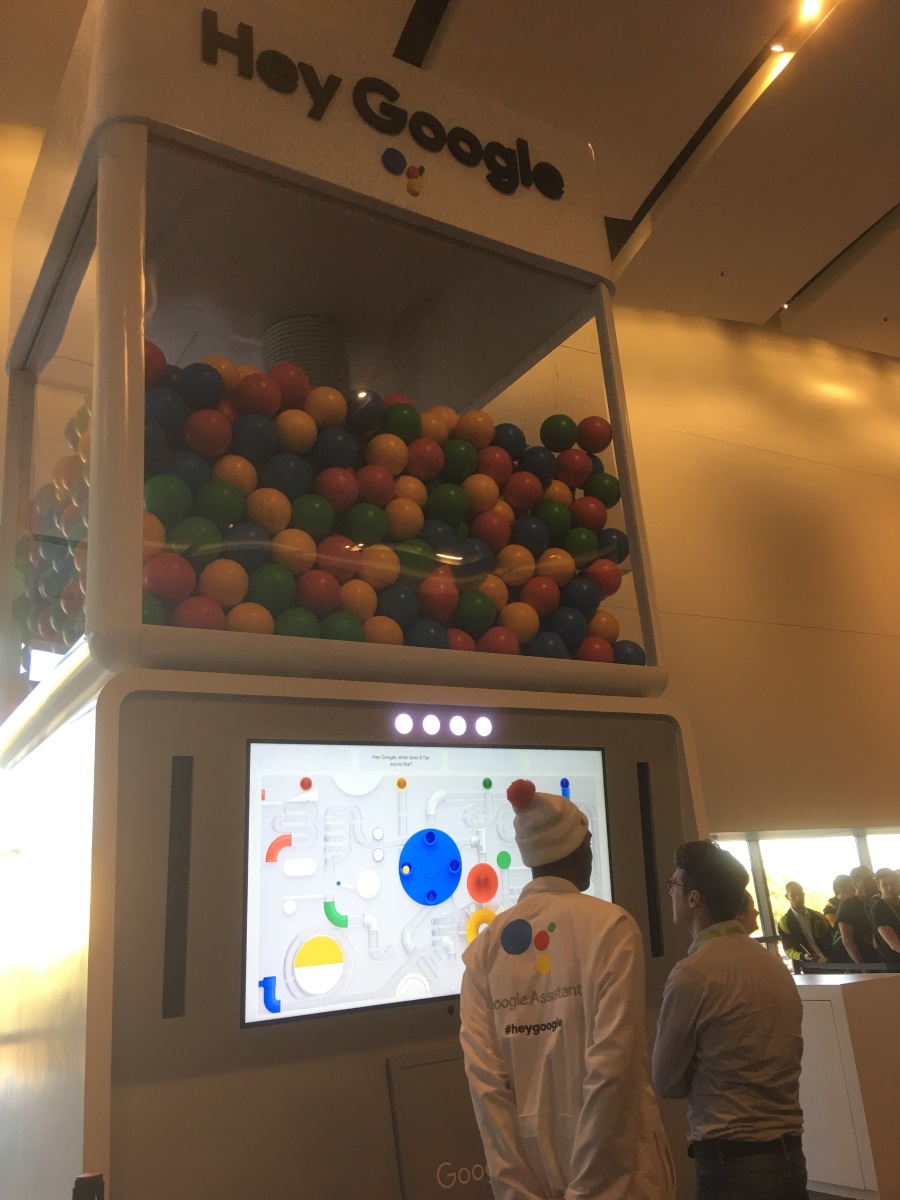 Unbelievably, some attendees waited for well over an hour for the opportunity to try their luck with the machine, though everyone who tried seemed to enjoy the experience and walked away with something to show for their time.

Now let’s look at a some of the more unusual items that were at CES. As before, prices quoted are in U.S. dollars. 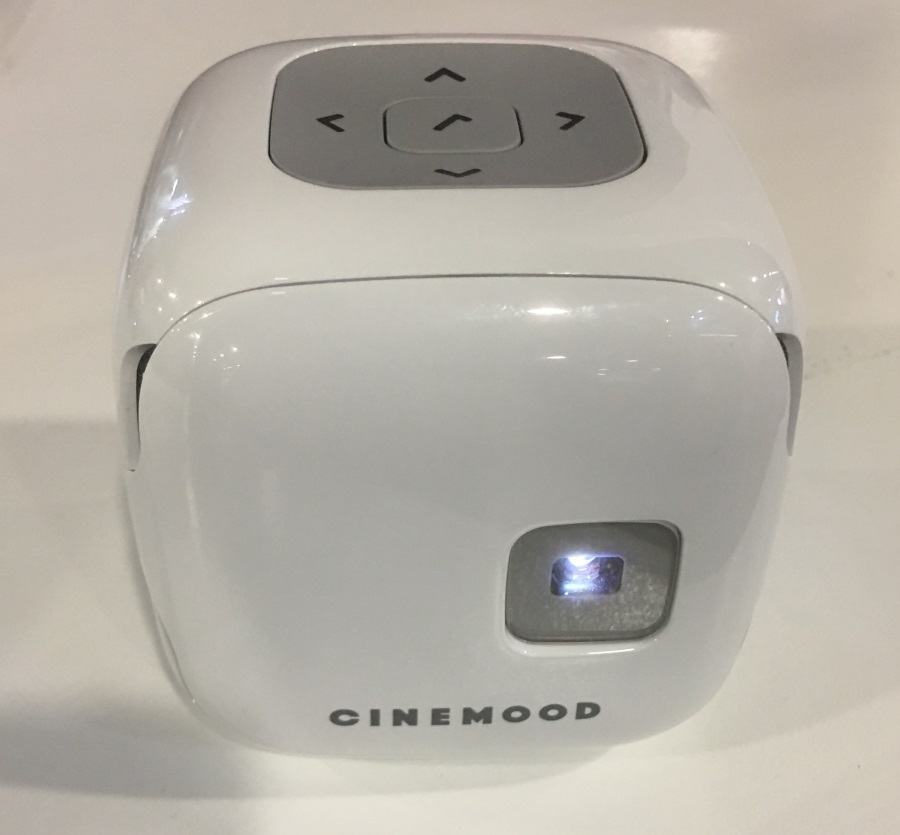 The Cinemood Projector packs a big projection into a small cube: $399 and only three inches wide, it casts an image more than 12 feet wide. The Cinemood is also Bluetooth and Wi-Fi enabled, boasts a five-hour rechargeable battery, and can be controlled remotely with iOS or Android apps, or even an Apple watch. In the demo I saw, the images were clear and the device itself was fun to operate. 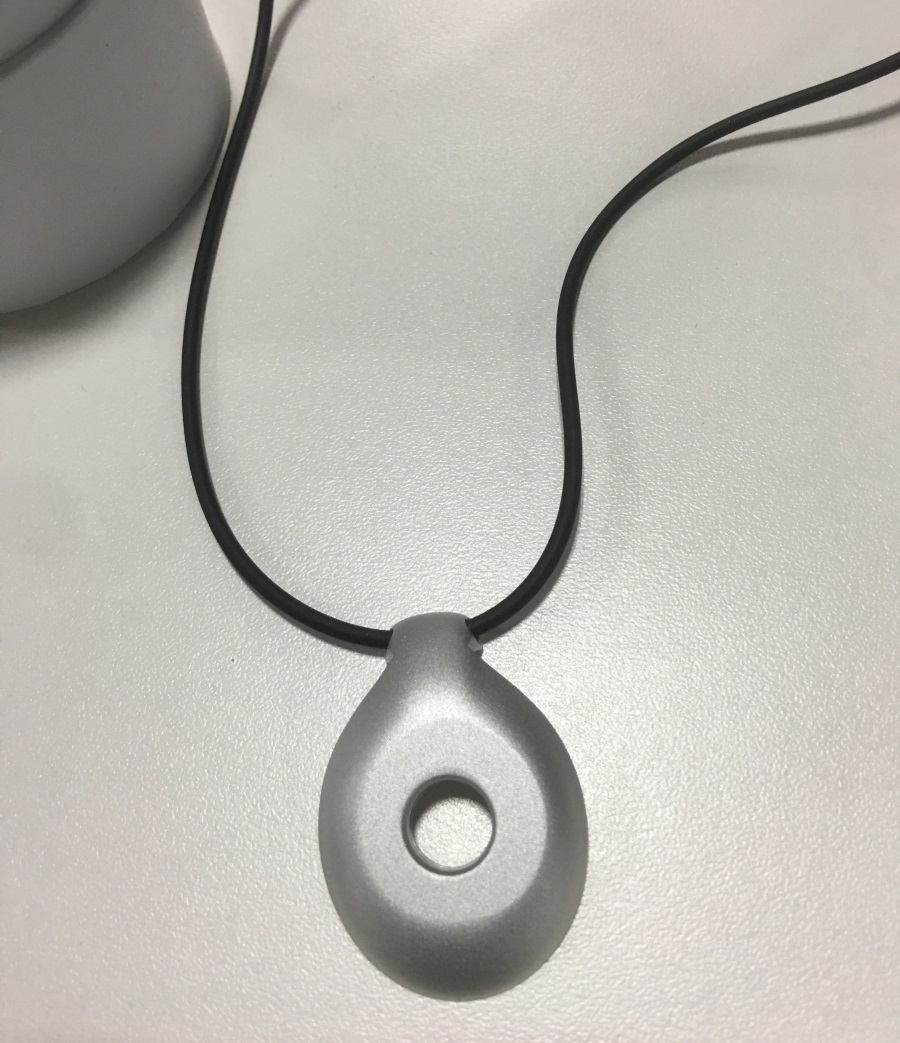 The Senstone is a camouflaged recording device that can easily be attached as a clip, bracelet, or necklace. It features a small button on its side that users can press to turn on the recorder. The device’s battery lasts for three hours, and the recording is stored on a smartphone via Bluetooth.

As jewellery, the Senstone certainly looks nice, and I could see it being a useful device for taking notes, but it’s likely many users would consider using it to record others who may not be aware they are being recorded, and I can’t say I approve. Regardless, it’s already in stores for $128. 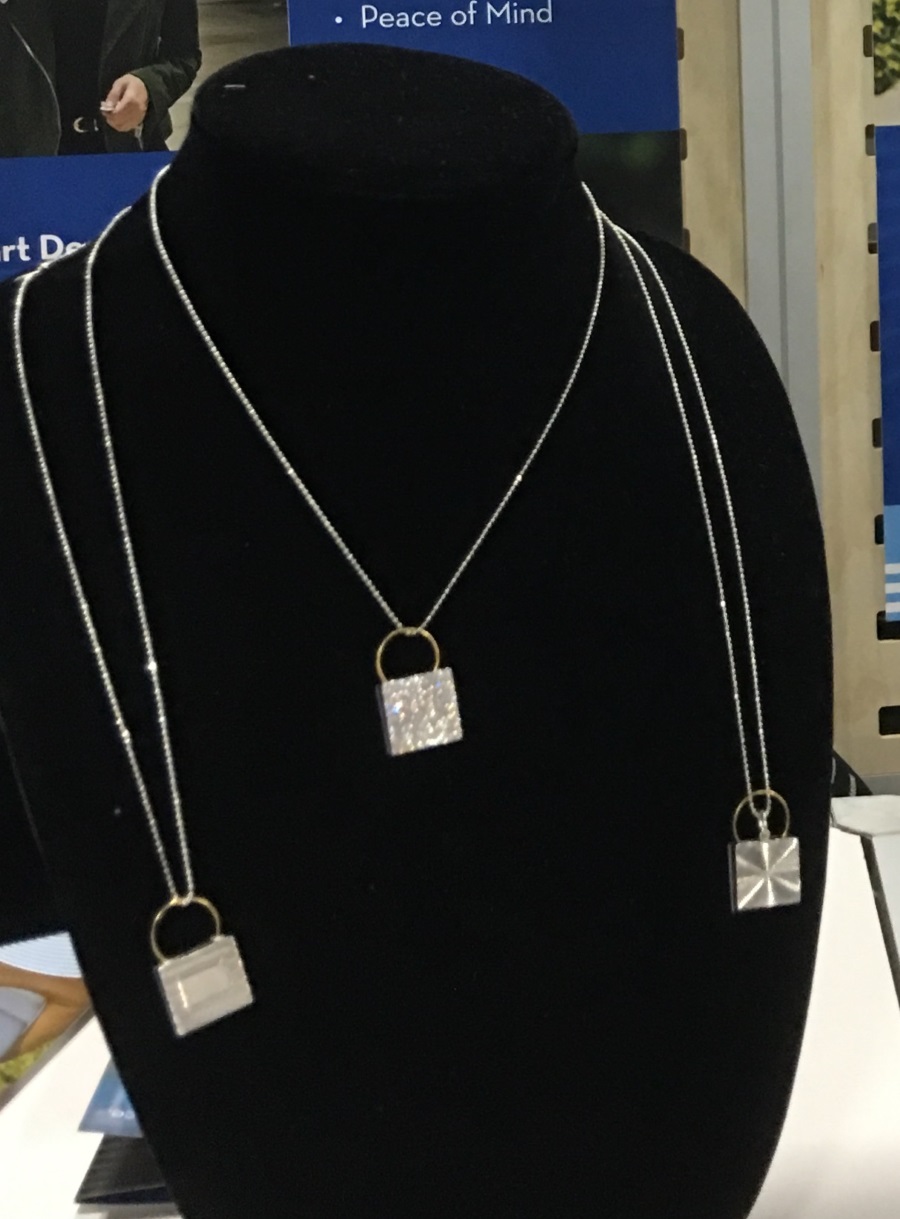 The Ripple Alert is a thumb-sized button that connects to your smartphone and can be attached to bracelets, keys or necklaces. Designed for emergencies, the Ripple can be pressed once if the user wants to connect with a Ripple team member, or three times to dispatch local authorities to your location. You can also specify allergies or other medical conditions in your Ripple profile. One year’s service is $129.

Resembling a small box with magnetic wheels, the Root robot is designed to teach students from kindergarten to high school how to program. Each robot connects to an iPad and can be programmed to perform a variety of activities, such as climbing up a wall, detecting colours, lighting up or playing music. It looks like a really good tool to teach kids programming, from basic skills to Swift code, Python and Java script. The units will be available in June for $200 each. 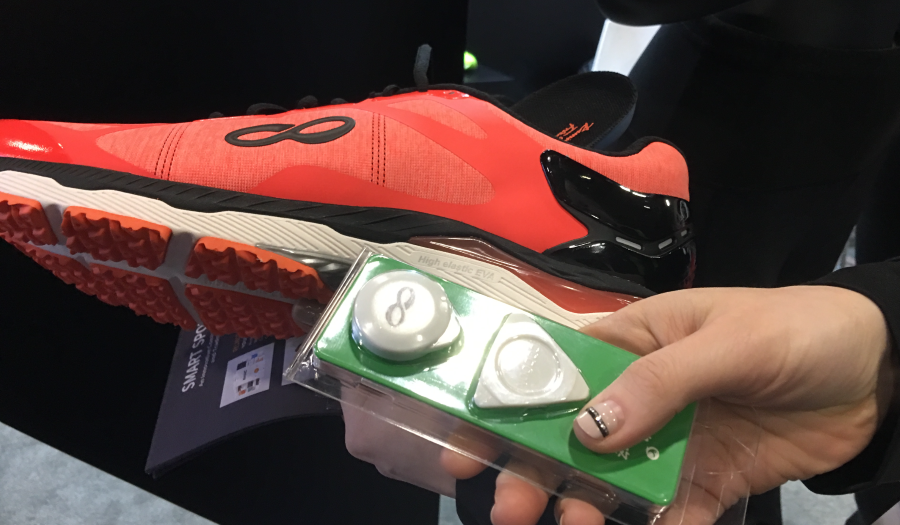 Just to cover all angles, here is something for runners: Runtopia manufactures a sports bra with a heart rate monitor for $50. Also available are $89 running shoes with a smart chip under the sole that connects to the runner’s smartphone and provides audio coaching and training plans. Runtopia plans to issue a similar shoe system for walking later this year. 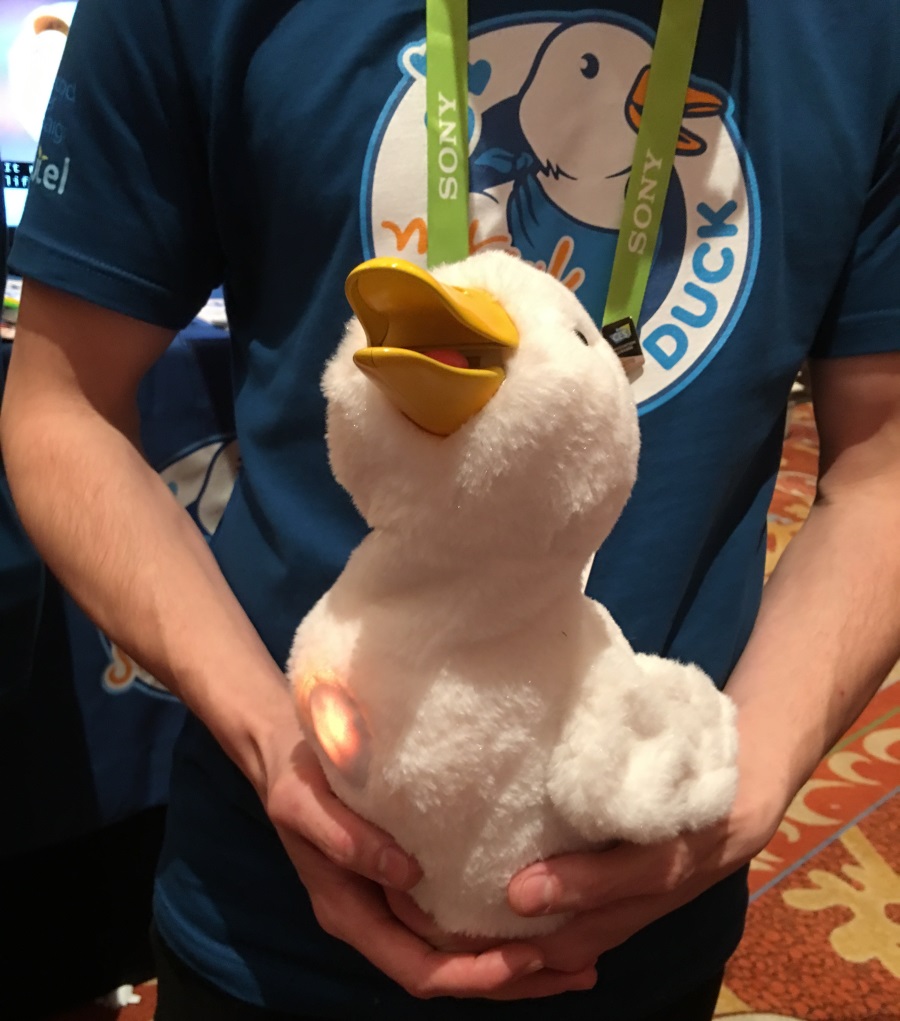 And to close this report, I wanted to give a special mention to insurance provider Aflac, which is sponsoring an interactive stuffed version of its duck mascot. While a public release of the toy, manufactured by children’s health startup Sproutel, is not currently planned, it’s being sent to childrens’ hospitals for patients who are battling cancer and was demoed at CES.

My Special Aflac Duck comes with an app that children can use to explore the world of the character’s pond, while in our world the duck receives treatments alongside the child.

Giving children the opportunity to share their experiences with a soft, cuddly friend helps add joy to an experience that can often be unfriendly, and helping the child cope and receive support for their emotional well-being that could otherwise not be as easily met.

For my last CES report, coming next week, I’ll discuss some of the senior-facing products that I saw at CES.

Previous articleCatherine Boivie at CES 2018: a few things for your car and home
Next articleWho won the battle between Amazon Alexa and Google Assistant at CES 2018?