When James Thomas, the chief marketing officer at Vancouver-based Allocadia Software Inc. has a problem… and no one else can help… he can turn to… if he can find them… his A-team!

Except that Thomas’ A-team doesn’t include B.A. and Hannibal, nor do they drive around in a GMC Vandura van. It’s not very hard to find either, because he’s grouped his “A-team” of customer advocates together in an online hub. Allocadia uses Influitive Corp.’s AdvocateHub, a web-based service targeted at business-to-business companies that promises to help get more out of advocates – turning the people that love a product into a channel to help drive referrals, amplify social media efforts, and strengthen the community around that product. It’s a concept that Thomas understands well, because before he became the CMO of Allocadia, he was an advocate for the marketing performance management company.

“If they had an advocate program, I would have been a member of it,” he says. Working as the vice-president of marketing for a recruitment and hiring software firm, he used Allocadia’s software-as-a-service product and happily did media interviews about how he used the product. But even before he started working at Allocadia, he recognized his experience as an advocate could be better. “It was sometimes hard to know if I was helping, or what happened next. The idea of a more continual approach would have made a lot more sense to me.” 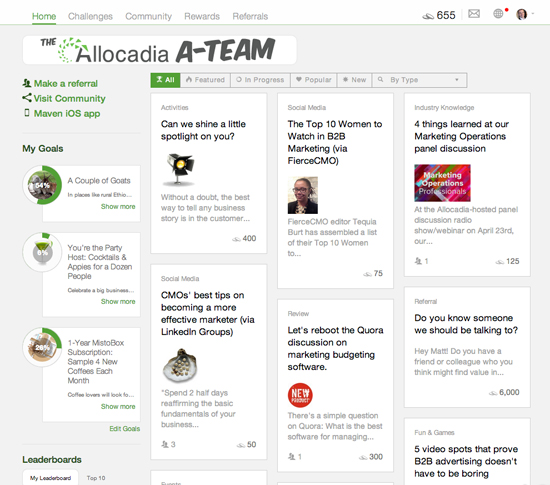 Thomas was also aware of Influitive’s solution before he joined Allocadia. He heard founder Mark Organ, who previously founded marketing automation software firm Eloqua, talk about the concept of customer advocacy at trade shows and thought the concept was “fascinating.” Shortly after coming on board with Allocadia in January, he implemented use of Influitive’s hub and tasked new hire Matt Davis, marketing manager for Allocadia, with overseeing the hub’s operations.

Davis took Allocadia’s tracking of certain engaged customers from a spreadsheet to Influitive’s self-service AdvocateHub. He dubbed it the A-team and positioned it as something that would provide benefits to his customers that joined the hub, and a chance to gain recognition for things they were already doing. The community that’s formed has resulted in Allocadia reaching new product users that it didn’t talk to previously – marketers that were lower in their organization’s hierarchy and didn’t have a relationship with Allocadia to discuss licencing, but still used the product daily. In total, Davis says he manages about 150 advocates with the hub.

“Influitive has opened up a channel of communication with those people,” Davis says. “There’s so many things competing for the attention of marketers. The fact our audience is spending time on this is really cool to see.”

Toronto-based Influitive was founded in 2010 and launched its AdvocateHub web service in 2012. The firm pushes advocate marketing as a way to boost referrals, boost positive product reviews, and generally become more engaged with top customers. The hub allows users to create social media-style profiles and then awards them points for completing challenges created by the company. Influitive’s team is a growing one, already having moved its Toronto headquarters into its own west-end building, and it includes satellite offices in San Francisco and Boston.

A startup that’s achieved Series A funding from venture capitalists – to the tune of $11.3 million according to Mattermark – Influitive is the third-fastest growing Canadian startup in that segment.

Founder Organ is known in the startup community for creating companies that create their own market category. Marketing automation firm Eloqua, his last firm, was known for that and is now a subsidiary of Oracle Corp. Influitive’s push of advocate marketing in the SaaS space means it has to do some customer hand-holding along the way. To that end, an advocacy coach is assigned to guide each new company using the AdvocateHub and the on-boarding process begins with an assessment about what advocacy programs a company is already conducting, and where it wants to go. Of course, Influitive uses its own hub as a way to connect with its customers.

“We help motivate our customers by having certain milestones they’re accomplishing,” says Chad Horenfeldt, director of customer operations at Influitive. “The most important part is always thinking about it from the advocate perspective – what do they want, what’s in it for them?”

That’s an approach that Davis keeps in mind with the A-team. Some of the challenges he issues will simply be recommendations to read helpful marketing articles online, or an interesting LinkedIn discussion. He’s also issued challenges to recruit customers to take part in panel discussions at conferences, or just to hear feedback about their product.

Davis makes feature three feature requests to the Influitive team himself, and has already seen two of them incorporated into the product. He’s impressed with that responsiveness, but wants to see better prize fulfillment when his advocates cash in their points – similar to Influitive’s already existing integration with Tango Card. 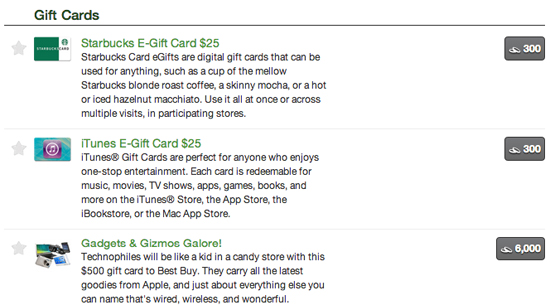 “The more automated we can make fulfillment, the better,” he says. Davis has snagged Justin Timberlake tickets for one long-time advocate, and the company also offers a trip to Vancouver to meet its senior team as one of the prizes available.

But cashing in for prizes isn’t the main motivation of most advocates, Horenfeldt says. “The other part of it is from the business-to-business aspect, people realize it’s in their best interest to do this for their own career and networking.”

Influitive’s service starts at about $2,000 per month and it offers tiered pricing based on how many active advocates a customer manages in their hub.

For Thomas, the price has been worth it. He says the number of referrals he’s received out of the AdvocateHub has more than covered the cost. One customer even delivered four referrals in a single day, and the hub is approaching an average of one referral per day. So it’s no wonder Thomas considers himself an advocate for Influitive.

“With the idea of this community we’re starting to build around Allocadia, it becomes so much easier to engage with customers,” he says. “I’m sure we’ve referred as many leads to Influitive as our customers have referred to us.”

It looks like if Influitive ever runs into a problem, it knows where it can find help.

Why you should move to Toronto from Silicon Valley