The Cobra is already within striking distance of its target.

The Cobra is a project to build the perfect wallet for today’s techies.The target is $30,000, which is how much money Toronto-based designerAlex Kennberg hopes to raise for the venture on the Kickstartercrowdfunding site.

As of noon on Monday, the project had already raised nearly $19,000 ofits goal from 430 backers and still had another 27 days to go before the Kickstarter campaign expireson Oct. 21. Looks like Kennberg and his Cobra co-designer Joshua Moorewon’t have any trouble reaching their fundraising goal.

Photos of the Cobra wallet fromKickstarter.com.

It’s just another creative project from the busy, innovative mind ofKennberg. He worked at Google for four years as a technical lead onseveral projects such as the Google+ mobile app before founding FreePoint Inc., a startup that just released Pictoreo, an app allowingAndroid users to take photos, then animate specific areas of the frame. 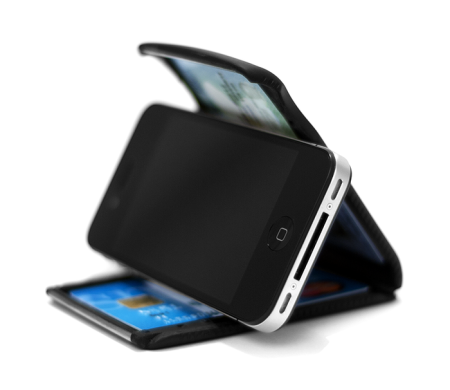 Another Kickstarter image showshow the Cobra wallet can be used to prop up a phone.

Kennberg’s latest idea is a lot less high tech but definitely featuressome high-minded design. The Cobra is a wallet made to accommodate yoursmartphone plus eight cards, but without the bulky design (it’s lessthanhalf an inch thick, helping you avoid those embarrassing GeorgeCostanza moments when your wallet is so crammed with stuff that itfeels more like half a foot thick.)

The outer casing is made of thermoplasticpolyurethane (TPU), a type ofplastic often used in cell phone cases. It also features two stainlesssteel cores that offer RFID protection and corrosion resistance. It hasa curved design and a stainless steel spring that flexes back intoshape whenever the wallet is opened and closed. It can also be used toprop up your phone. According to the Kickstarter posting, the Cobra isdesigned to hold any smartphone, not just the ubiquitous iPhone.

Stay tuned for an update on the grand total raised on Kickstarter afterOct. 21 to find out how many people will ultimately open up theirwallets to show some faith in the Cobra wallet.

Christine Wonghttp://www.itbusiness.ca
Christine Wong has been an on-air reporter for a national daily show on Rogers TV and at High Tech TV, a weekly news magazine on CTV's Ottawa affiliate. She was also an associate producer at Report On Business Television (now called BNN) and CBC's The Hour With George Stroumboulopoulos. As an associate producer at Slice TV, she helped launch two national daily talk shows, The Mom Show and Three Takes. Recently, she was a Staff Writer at ITBusiness.ca and is now a freelance contributor.
Previous articleQuebec City’s Crowdbase raises $650K in VC
Next articleWaterloo, Toronto to host first ever Google for Entrepreneurs Week events