Project Fanchise, a sports startup based in California, is aiming to make fantasy football a reality.

In fact, Fanchise will wrap up an Indiegogo campaign this week after raising almost $60,000.

Instead of offering backers a free t-shirt or hat, Fanchise’s perks include team positions like being a scout or assistant offensive coordinator. By pitching $650 to their cause, Fanchise will even make you an assistant GM and co-founder.

“[Fans] are going to make the decisions on the general manager [and] the coaching staff, they’re going to be involved in scouting the players, and choosing which players make the roster,” Sohrob Farudi, co-founder and CEO of Project Fanchise, explained during a press conference. “When it comes to game time, [fans are] actually calling plays in real time on the field.”

When the founders of Fanchise say they’re going to let fans make the decisions, they really mean it: The team itself will be be based in Salt Lake City as a member of the Indoor Football League (IFL), with all details worked out by dedicated backers. The company also recently announced that its team will be called the Screaming Eagles. Both the name and location of the team were voted upon by supporters.

Like fantasy football, Project Fanchise will be largely run through an app interface. While it is still in the development phase, Fanchise has already released some screenshots of the design. 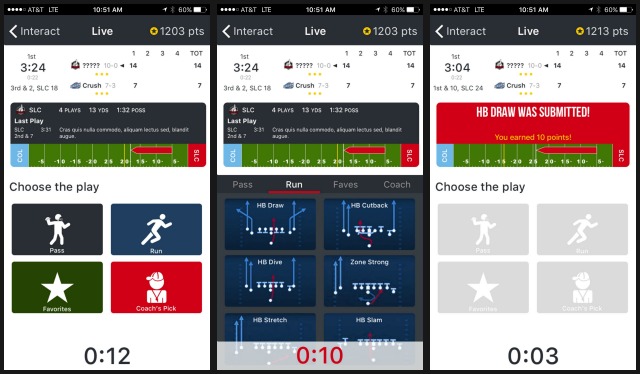 According to CBS Sports, the idea is to have fans select a play, which is then relayed to the coach, who then communicates the call to the quarterback. But while the concept may sound exciting for fans, it poses many practical questions about the technology’s plausibility.

To be fair, the developers behind Fanchise appear to know this: Early on, play-calling will be more limited while the technology continues to grow, CBS reported, and fans may only be able to call plays during timeouts. To solve the problem of fan overflow, Fanchise has devised a tier system in which fans will need to prove their skill before being granted play-calling privilege.

“We don’t believe that all fans are equal,” Grant Cohen, co-founder of Fanchise, told CBS. “This is not a true democracy.”

Fans can progress up the Fanchise ladder by answering daily football trivia questions and participating in challenges. They receive points if their chosen answer coincides with that of the majority of users.

While running the team might be a novel idea to most fans, it could put players and coaches in a very frustrating position. To essentially have no control over the way the team runs might dissuade top talent from wanting to take place in this experiment. On the other hand, Project Fanchise has generated lots of media attention, which could be a bonus for players looking to be drafted into bigger leagues.

The Screaming Eagles are expected to make their debut during the 2017 IFL season.

Jackie Atkins
Jackie Atkins is a competitive alpine skier, student and aspiring writer who primarily contributes stories about the intersection between technology and sports to ITBusiness.ca.
Previous article
I got pwned. Did you?
Next article
HPE spins Paramount partnership into bold marketing campaign for Star Trek Beyond

The NFL is in legal trouble over concussions again – Tech in...