Last year we looked at the Motorola Moto X, and although it was not part of our 2014 top 10 business smartphones, we were still impressed enough to write about it. However, there were a few too many hardware compromises to recommend it completely. This year, Motorola has released a new Moto X in Canada, and the Play does address some of the problems we had with the previous model, battery life being a big one.

Unlike the 2014 model, the Moto X Play is now more of a mid-range rather than a premium device. Consequently, its specifications aren’t top of the range anymore, but it still performs well, especially when compared to other phones at the same price point. Also, thanks to the legacy of Motorola being previously owned by Google, the Moto X Play is one of the first devices in Canada outside the Nexus series of phones to receive an update to the latest version of Android, Android 6.0 Marshmallow. 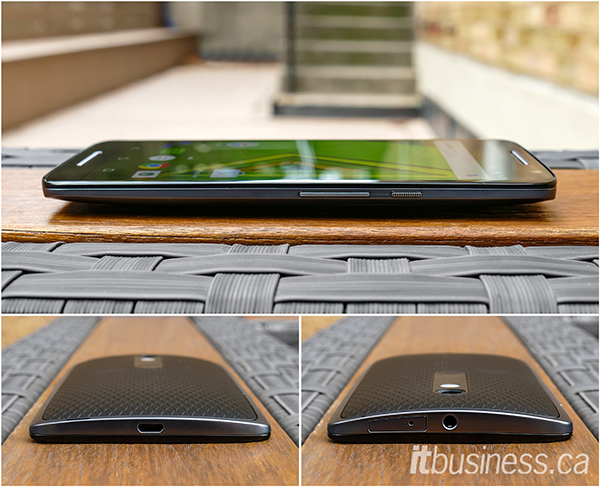 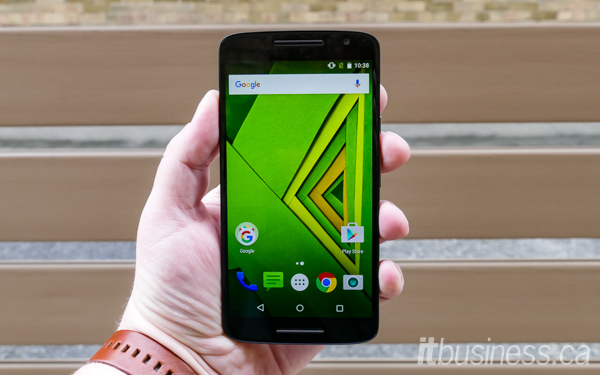 The Moto X Play uses a similar design language to last year’s Moto X, which consists of a coloured plastic back surrounded by a curved metal frame. The design is both attractive and comfortable to hold. Because the Play is a mid-range device, there have been a few downgrades, so the frame is now plastic but very convincingly finished to look like metal. Despite the lower-grade materials, the build quality of the Play is still excellent and better than most phones in its price range.

The Play’s 5.5-inch display is very good for a mid-range device too. It’s a 1080p screen, not QHD, which is to be expected for a mid-tier phone, but still sharp enough unless you stare at it closely, and its lower resolution will also use less power, helping with battery life. It is very bright, so the Play is quite usable outdoors in bright light. Additionally, even though the screen is quite big, the Play’s 76 percent screen-to-body ratio means that the phone itself isn’t unreasonably large.

The internal specifications of the Moto X Play are where it is most clear that this isn’t a flagship phone. It is powered by an octa-core Snapdragon 615 SoC, which has comparable CPU performance to last year’s flagships. Unfortunately, its Adreno 405 GPU is quite underpowered, performing quite poorly even when compared to 2014’s LG G3, as can be seen in the chart below. Still, this performance deficit is rarely noticeable when using the phone for normal smartphone tasks.

(*these tests are not available on iOS)

Although we were a little disappointed with the Moto X Play’s silicon, we were very impressed with its battery life, thanks to its huge 3,630 mAh battery and less demanding specifications. It’s one of the largest available of any current smartphone and allows the Play to surpass by far every other smartphone we’ve tested this year. The PCMark test used above keeps the screen on continuously, so in the real world, a moderate user can expect to get almost two days of use from the Play. Impressive. 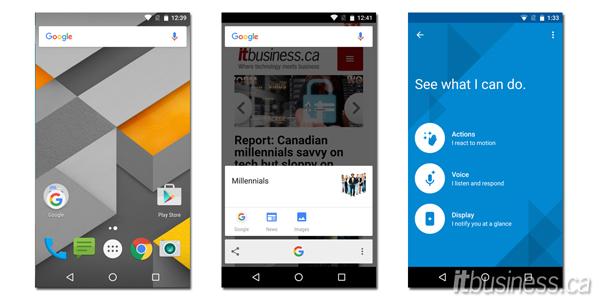 Another impressive aspect of the Moto X Play is its software. Motorola’s smartphones run an almost stock version of Android, a legacy from when Google owned it (Lenovo owns the company now). Another aspect of that legacy is that its phones are updated to the latest version of Android a lot faster than most other OEMs (but not as fast as Google’s Nexus phones, of course).

The Play shipped with Android 5.1.1 back when it was released in August, and Google launched Android 6.0 at the beginning of October. The Play’s update to Marshmallow happened as we were writing this review in mid-December. While waiting for more than two months does seem like a long time, keep in mind other non-Nexus Android phones shouldn’t expect an update to 6.0 until Q1 of next year at the earliest.

Android 6.0 Marshmallow is almost indistinguishable visually from Android 5.1.1 but does add a lot under the hood, including a sophisticated application permission system that lets you allow or deny an app access to certain features of your phone. There is also a new contextual search feature called Now On Tap that pulls up personalized search results based on the content of what you are viewing.

The Moto X Play’s software isn’t 100 percent stock Android, though, because Motorola’s useful suite of Moto applications is also installed. It consists of Moto Action, which adds gesture control, Moto Voice, for voice control and search and Moto Display for glanceable notifications that appear even when the screen is off.

To hit a lower price point, mid-range phones are an exercise in compromise – what can be cut from a flagship to bring the cost down? One of the first victims of this economizing is usually the camera. Motorola recognizes this, and although the Play’s camera isn’t amazing, it’s certainly a lot better than the ones found in most other phones in its price range. Its 21 MP Sony IMX230 Exmor RS sensor produces excellent results in good light, but unfortunately, its low light performance isn’t as good, and the preinstalled Motorola camera software is awful. 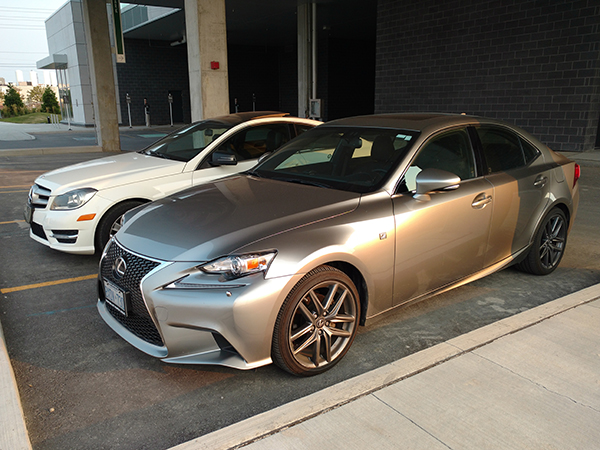 The main issue we have with the Moto X Play is its Snapdragon 615 SoC performance and regrettably Motorola is stuck between a rock and a hard place here. If it wanted to include a chip with a better GPU, it would have to equip the Play with a higher-end SoC, which would move it out of its mid-tier position and there isn’t any other alternative mid-range chip from Qualcomm it could have used instead.

Along with the abovementioned low light camera performance, the other big issue we have relates to the model Canadian carriers have decided to sell. The Play comes with either 16 GB or 32 GB of internal storage, but only the 16 GB model is offered here. It’s also disappointing that Motorola’s device customization service Moto Maker has still not come to Canada because in other markets you can use it to order the Play in colours other than basic black. 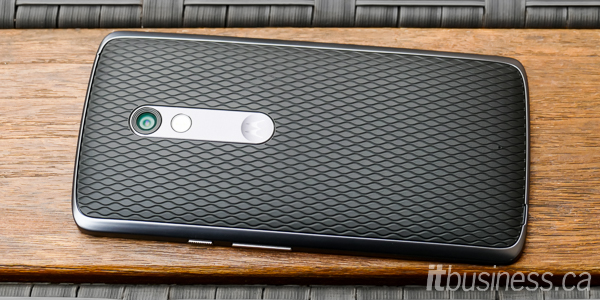 Moto X Play is certainly one of the best mid-range Android smartphones you can buy today. With the price of flagship phones skyrocketing in Canada for many users, especially business users, it makes more sense to look at something more economical. Even though it isn’t constructed from premium materials, it is still very well made and looks a lot nicer than many other budget smartphones.

Despite its lower specs on paper, the Moto X Play still performs well, and its battery life is outstanding. It has an excellent camera for a mid-range device and runs almost stock Android 6.0, and is one of the few smartphones to currently run the latest version of Google’s OS. Our biggest disappointment is that the Canadian model only comes with 16 GB of internal storage and in just one colour – black.

The Moto X Play is available from Bell Mobility, Koodo, Rogers, Telus, Videotron, Wind Mobile, and Virgin Mobile. It starts at $0 on a 2-year term and $400 outright.