Since 2010’s Nexus One, every year Google has released a selection of Nexus devices, both smartphones and tablets, designed to showcase the latest version of Android and its purest vision for the platform. 2013’s Nexus 5 proved to be one of the most popular Nexus smartphones released so far because it was great value for money. It combined close to top-of-the-range specifications in a more economical body and was sold for a very reasonable price.

However, its 2014 follow-up was less well received. The 6-inch Nexus 6 was Google’s attempt to take the Nexus brand into more premium territory and although it was still a very good phone it was too big for many users and more importantly much more expensive. Well, it looks like Google has learned its lesson, and this year it is now offering two Nexus smartphones that run Android 6.0 Marshmallow. There is a no-compromise premium device, the Nexus 6P (which we already looked at and like a lot), and a more reasonably priced model, the Nexus 5X, that we are looking at today. 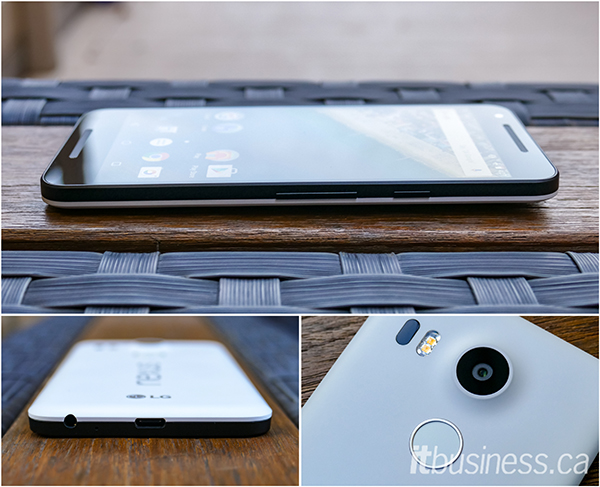 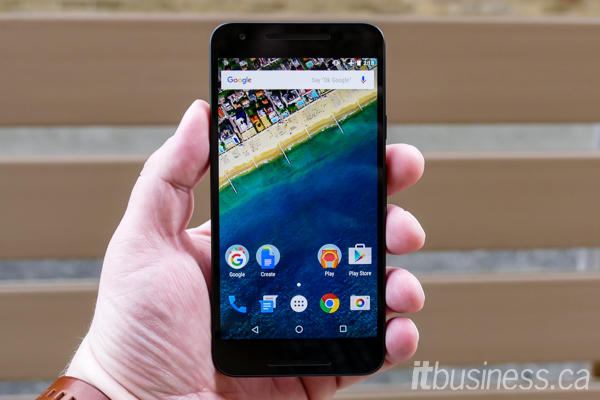 Like both the Nexus 4 and 5, Google has once again tapped LG to be the partner to make the Nexus 5X. This means that once again it shares a lot of features with LG’s current flagship device, the LG G4 (which is also one of our 2015 top business smartphones). So while their external designs are quite different, both phones have some specifications in common – for example, both use the same hexa-core Snapdragon 808 SoC.

However, the 5X has had a few more cuts made to its specs to meet its lower price point. It only has 2 GB of RAM versus the 3 GB found on the G4, and being a Nexus phone the battery is not removable, and there is no microSD slot (standard practice for all Nexus phones), both features that the G4 has. One feature that the 5X does have that the G4 doesn’t is the Nexus Imprint fingerprint reader located on the back below the camera. This reader integrates with the new native biometric security framework of Android 6.0.

The Nexus 5X also has a Full HD rather than WQHD LCD screen, another compromise to lower its price, but because it is only 5.2-inches in size it’s still quite crisp. The smaller size and resolution has two other advantages – it allows the Nexus 5X to be on the smaller size for a 2015 smartphone, and it drains a lot less power. The screen is also very bright, much more so than the original Nexus 5, and is is very colour accurate. In fact, as far as display quality and accuracy goes it’s one of the best of any current smartphone.

Since the use of premium materials is reserved for the higher-end 6P, you won’t find any metal on the 5X. But while it’s an all plastic affair the fit and finish are first class, and the back has a nice satin-smooth coating. Both new Nexus phones use the new USB Type-C port, which has a reversible connector, for charging so you don’t have to worry about which way you have the cable facing before you plug it in.

(*these tests are not available on iOS)

Performance-wise, the Nexus 5X is comparable to the LG G4, not surprising since they have so much in common. When compared to other flagships such as the Galaxy S6 and Xperia Z5 the 5X is a slower device, but those phones cost considerably more, and there are very few smartphones that start at $499 outright that can compete with the performance of the 5X.

Even though it only has a 2,700 mAh cell, the 5X’s battery life is very good, beating all of the phones we compared it to above. It isn’t as good as the Moto X Play (a similarly priced device that is also one of our 2015 top business smartphones), nor is it as good as the Nexus 6P, but that is a much more expensive device. Still, we were surprised by the result, given the battery size, and it’s because of the 1080p display and the power efficiencies of Android 6.0 that the 5X can last this long. 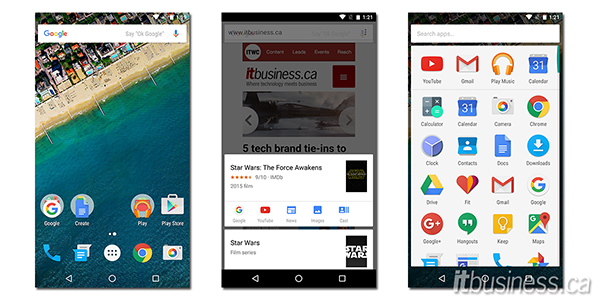 The Nexus 5X, like the 6P, of course, runs the latest version of Android, Marshmallow. It launched running 6.0 but was recently updated to 6.0.1. This update added new emojis and included the December 2015 security patch because Nexus devices are among the first phones to get Google’s monthly security updates. Along with these updates, Android 6.0 adds more security under the hood and improves the application permission system, giving you granular control over what information your phone’s apps have access to. These improvements, along with the Nexus Imprint fingerprint reader, mean that for business use, where security is paramount, the Nexus 5X is a great choice because it’s one of the most secure Android phones available.

Visually, Android 6.0 isn’t a big departure from Lollipop, with the main difference to the look and feel being the new vertically scrolling application drawer. Marshmallow also includes Google’s new Now on Tap feature, a contextual search tool that provides information based on what you are looking at at the time. For example, if you are reading an email and it references a particular product or place Now on Tap would bring up search results about that same product or place.

One of the biggest weaknesses of the Nexus 5 was its lacklustre 8MP camera. Last year, Google claimed that the Nexus 6 had a much better camera, and although improved, it was still a letdown. It looks like the third time’s the charm because the claimed improved camera on the 5X (which is the same as the one found on the Nexus 6P) is very good. In fact, we’d go as far as to say that the new Nexus phones have some of the best cameras of any Android smartphones, thanks to their new 12.3 MP Sony IMX377 Exmor R sensors. Both daylight and low light capture results are outstanding. 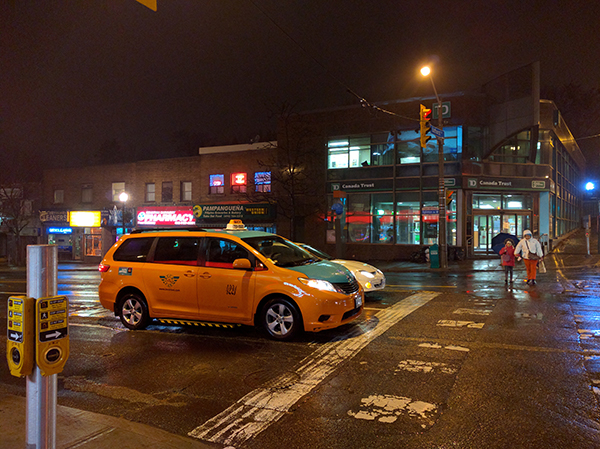 There isn’t much that we don’t like about the Nexus 5X to be honest. Although we could complain that there is no microSD slot and that the battery is non-removable, this isn’t new for a Nexus device. One feature that the 5X’s bigger brother has are front-facing stereo speakers, but again not having them on the smaller phone was to cut costs and isn’t a deal-breaker.

One complaint we have again is how carriers in Canada sell the Nexus 5X. Although we do recommend just buying it directly from Google, if you want to go through a carrier, perhaps to take advantage of the $0 term pricing, the only colour choice is black, and more egregiously the only storage capacity available is 16 GB. Without a microSD slot to expand it, 16GB is simply too little storage for a modern phone. 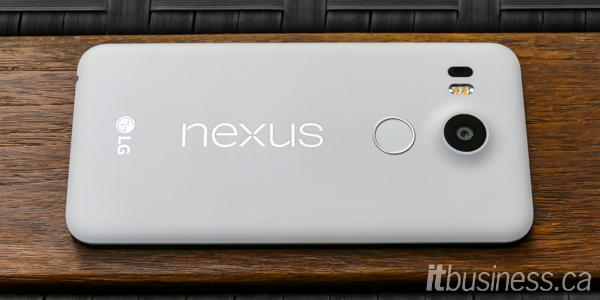 The (second) best Nexus yet

Google’s new Nexus phones are amongst the best released this year. Although the Nexus 6P is close to the top of our list thanks to its premium build and superlative performance, not everybody wants to spend $699 and up for a new smartphone. Therefore, the Nexus 5X is a much better deal because it has many of the advantages of the 6P, including the excellent camera, Nexus Imprint fingerprint reader and all the security advantages of running the latest version of Android.

The Nexus 5X is also a great choice for someone looking for a (slightly) smaller device in the 2015 sea of phablets. The only frustrating aspect is that if you want a choice of colours and storage capacities, you need to buy it outright from Google — none of the carriers stepped up to the plate to carry more than the base 16 GB black model.

The Nexus 5X is available directly from Google for $499 for the 16 GB model and $559 for the 32 GB. The carrier model is sold by Bell Mobility, SaskTel, Telus, Wind Mobile and Videotron and starts at $0 on a 2-year term.