The Canadian Revenue Agency (CRA) has extended its My Business Account online service to allow business owners to ask questions and have them answered, federal ministers announced in Toronto yesterday.

Minister of National Revenue Gail Shea and Minister of State for Small Business and Tourism Maxime Bernier said the move is part of the government’s initiative to cut through red tape for small business and will make it easier to interact with the CRA. The Enquiries service begins this month, and allows for tax-related questions specific to the business owner’s account. CRA staff will respond to the questions online, in writing.

The move will improve the CRA’s accountability and make it easier to access for small businesses, the Canadian Federation of Independent Business (CFIB) said in a statement. CFIB President Catherine Swift accompanied the ministers for the announcement. 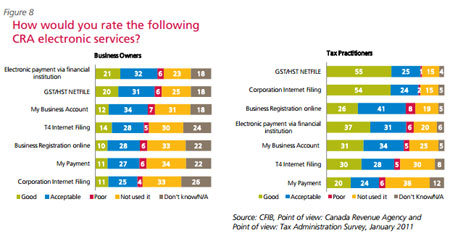 It marks the first time that businesses can communicate electronically with CRA staff. The CRA is also committing to honour the answers it issues, even if they later turn out to be wrong, according to the CFIB. In a survey about CRA services released earlier this year, the CFIB found that 57 per cent of small business owners and 78 per cent of tax practitioners didn’t believe the CRA was accountable for mistakes the agency made.

That same report found that 90 per cent of business owners and tax practitioners desired the ability to electronically communicate with the CRA.

“About half of our members currently use My Business Account and will be able to benefit from this new service right away,” Swift said in a statement. “We will be closely watching how well CRA delivers the service as well as encouraging other SME owners and their tax practitioners to use it.”

The 2011 survey of 10,600 business owners and accountants revealed feelings of fear, intimidation, and frustration when dealing with the tax man.