Samsung Electronics has expanded its portfolio of tablets with the 10-inch Galaxy Note 10.1, as the company tries to differentiate itself from the barrage of other Android-based products by allowing users to write on the screen using a digital pen, the company said on Monday at Mobile World Congress.

The arrival of the Galaxy Note 10.1 was one of the worst kept secretsin Barcelona after Samsung had plastered a hugebillboard at one thecity’s most busy squares. One might have been forgiven for thinkingthat the original 5-inch model, which wasintroduced in September lastyear, was just an experiment from Samsung, but with the arrival of the10-inch version the company seems serious about making it work.

Related Story | Galaxy Note: not a ‘me too’ device

Some customers have also shown an interest in the concept, or maybethey just like the big screen. But in December Samsung said it hadshipped more than one million units.

Samsung describes the Galaxy Note 10.1 as combination of a mobilephone, tablet and digital notepad. Thedevice is powered by a 1.4 GHzdual-core processor and uses Android 4.0 plus Samsung’s own Touchwizuser interface. 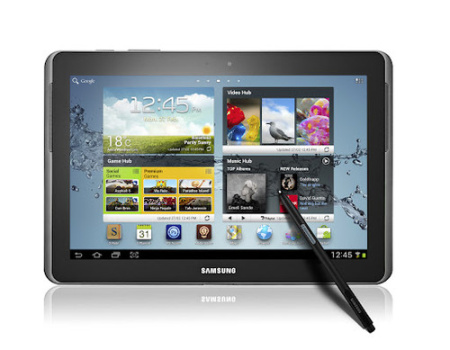 The screen resolution is 1280-by-800 pixels, and users can store theirnotes and drawings on 64 GB memory (there are also models with 16 and32 GB), which can be expanded using a microSD card. The Galaxy Note10.1 also has two cameras at 3-megapixels and 2-megapixels, and weighs583 grams.

In Sweden, the device will start shipping in May and cost about 5,200Swedish kronor (US$790) without taxes and possible subsidies. Thecompany didn’t immediately provide availability or cost information forother parts of the world.