Samsung Electronics has announced the Samsung Omnia M, a Windows Phone with a 4-inch Super AMOLED display that will first become available in Europe, the company said on Friday.

Samsung isn’t providing any pricing, but the phone’s specification suggests it will compete with Nokia’s low-end phone, the Lumia 610.

That’s possible thanks to an update to Windows Phone 7.5, which can run in less memory than the previous version — although developers may have to optimize their apps to run in just 256MB of RAM. 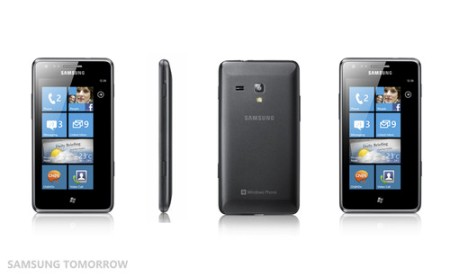 The Omnia M is 10.5 millimeters thick and weighs 119 grams, compared to 12 millimeters and 131.5 grams for the Nokia device.

Since the specifications are so similar, the price of the two phones should be close, and the Lumia 610 is priced at about $246.

It is hard not to read anything in to the fact that the Android-based Galaxy S III got a huge launch last week while the Omnia M got just a blog post.

“Strategically, Android is where Samsung puts all its focus, but the company doesn’t want to put all its eggs in one basket,” said Roberta Cozza, principal analyst with Gartner.

The Omnia M will be available starting in Europe and then rolled out to other regions, Samsung said.