Before Facebook, Pepsi Canada probably never had to worry about false complaints claiming their cans to be “an assault on God,” but now those comments are posted publicly for the world to see.

The comment in question is based on an urban legend that Pepsi omitted “under God” from a pledge of allegiance excerpt printed on cans in the U.S. Pepsi never sold such cans at all.

But Facebook user Sarah Snow doesn’t seem to know that.

“They said they did not want to offend anyone so lets not offend them by not buying their new can,” she writes on the wall of Pepsi Canada’s Facebook page. “We must stand up to this kind of assault on god (sic).”

Pepsi doesn’t have any such can, Snow is propagating an urban legend.

It’s the kind of risk more businesses are taking as they wade into social media waters. Opening up the doors to unsolicited consumer feedback inevitably means a brand will be exposed to some criticism, and others will see that.

But the benefits of engaging consumers in conversations on forums such as Facebook are emphasized by social media experts, and a myriad of Facebook fan pages prove consumers are more often positive than not.

“It’s a place where you can engage in dialogue, it’s the new 1-800 number,” he says. “We allow people to provide both sides of an opinion, we’re totally fine with that happening.”

Aside from Snow’s uninformed barb, Pepsi Canada’s Facebook Page reads like a testimonial. Comments such as “Pepsi is the best” and “Pepsi is better than Coke” are typical. The group has attracted more than 144,000 members.

The page was launched as part of a 2009 re-branding effort at Pepsi, Hooper says. A community manager was assigned to monitor the page, and a brand team under a marketing manager helps drive the conversation happening there.

The team expected about 25,000 fans to engage them.

“It’s not a Web site world any more,” Hooper says. “People live on Facebook as a way to connect with the people and things most important in their lives, and we needed to be a part of that.”

The Palo Alto, Calif.-based social network may have started as a way for college students to keep up to date with their friends, but it’s evolved since attracting upwards of 450 million members. Thousands of businesses offer brand pages that Facebook. Users can choose to “Like” those pages to receive updates from that brand, as well as engage in a conversation on the pages.

Companies benefit from viral style promotions that a social network encourages, says Brandon McCormick, manager of corporate communications monetization group at Facebook. Referrals from friends are the most effective type of advertising no matter what the product or service.

“We’ve been able to take that kind of word-of-mouth marketing and make it available to businesses — the small and local ones all the way up to global firms,” he says. “People really bring their whole selves into the site. They want to keep up with the brands that are interesting to them.”

Even business-to-business firms can do well with a Facebook presence, he adds. Facebook organizes its users into networks and those networks are often related to work. Professionals will often spend their personal time reading up on industry news, and Facebook is one more place to do that.

Facebook’s own research shows that an ad is 70 per cent more likely to be remembered if a friend is associated with it.

But that’s not to say everything on Facebook will go smoothly for a company. Every firm will have their own Sarah Snow moment – they’ll be criticized, fairly or not. So it’s best to be ready for that moment and have policies in place to deal with it, says Dave Fleet, vice-president of Thornley Fallis Communications.

“Processes can help reduce the risk of engaging online,” he said at IT World Canada’s recent Toronto-based Visability conference. “Create your policies ahead of time and protect your organization instead of having to react later.”

He said it’s important to define which employees can make postings to Facebook, and when it’s appropriate to do so. Policies can define how to react to foul language, personal attacks, and off-topic comments. They can also inform about the right tone of voice to use (should your Facebook postings use emoticons?) and when to ‘kill’ a comment.

Firms don’t have to start from scratch when forming a policy. Many companies make their own social media policies publicly available.

Page owners have control and can remove content they deem inappropriate, McCormick says. Flexing these muscles is best reserved for off-topic or offensive comments.

“You can curate the experience on your page as much as possible,” he says. “As a rule, we think being part of this two-way conversation means getting some criticism.”

Pepsi generally lets negative comments stand, Hooper says. Staff will respond if a poster has the facts wrong or is misrepresenting Pepsi’s intent. Mostly, the staff seeks to start conversations on the page and give fans things to talk about.

Pepsi chose to give Snow the silent treatment when she posted about the urban legend. The result was that four other fans came to Pepsi’s rescue, rebuking the poster for her out-of-context comment. 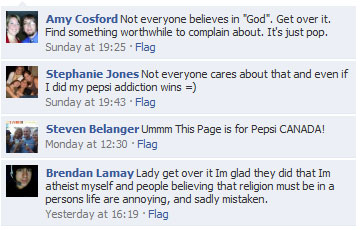 Comments responding to Snow’s complaint about a Pepsi can that doesn’t exist.

“This page is for Pepsi CANADA!” points out one fan.

Businesses seeking more fans to back them up in conversations can use Facebook’s advertising system to draw attention to their page. The social network gives an array of options that allow firms to target advertising only at users who live in certain areas, belong to certain networks, or have specific likes and interests.

There are two payment options, McCormick says, a fee per impression or a fee per click. The collateral impressions you get as a result of those actions are free. For example, if a user follows through on an ad and “Likes” a brand page, that will be displayed on their profile and published to their friends’ news streams.

“Anecdotally, our ads work really well compared to other types of ads,” the vice-president says. “We had a wedding photographer who targeted newly engaged women. She spent $5,000 in advertising and got $40,000 in business over five months.”

Facebook advertising was effective for Pepsi, and cheap, Hooper says.

“It has been very successful for us,” he says. “The good part about digital is that from an absolute dollar perspective, it’s a lot less than you’d spend on TV.”

Pepsi will be promoting its Refresh Project over the next several weeks, highlighting a fund awarded to proposals on projects to improve the world’s health, arts and culture, food and shelter, environment, neighbourhoods, or education. The project is featured in a custom “box” on the Facebook page.

That should help steer the conversation towards positive territory, and away from accusations about being sacrilegious.

Dandy on a race to build crowdsourced app in 60 days