No surprises from Google as it unveils Pixel 3, Pixel Slate, Google Home Hub 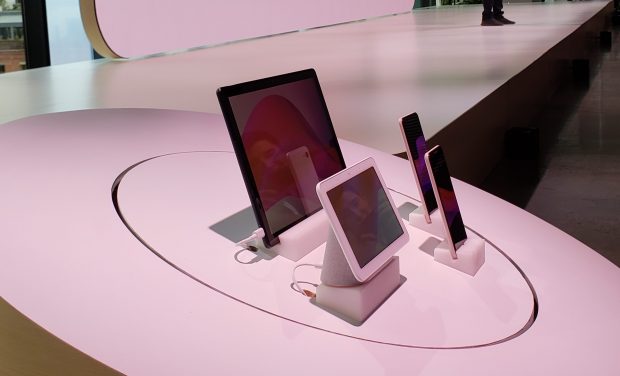 NEW YORK — Google did its best to try and distract people from the fact that most of its products have been leaked in the past couple of months, with flashy promos leading up to its Made by Google event Tuesday suggesting we haven’t seen it all.

But we kind of did. Nevertheless, the Pixel 3, Pixel Slate and Google Home Hub were all officially announced, and while there were little to no surprises, a closer look at some of these devices and the software underneath the hood reveals a few interesting details.

While there wasn’t much to unveil, Google officially revealed the hardware and software features that make the Pixel 3, and Pixel 3 XL, tick.

“For life on the go, we designed the world’s best camera and put it in the world’s most helpful phone,” said Google’s hardware chief Rick Osterloh.

Each phone will come with a set of front-facing and rear-facing cameras powered by what Google is calling its new Pixel Visual Core Chip, unlocking a suite of AI capabilities such as two new shooting modes, computer vision that helps select the best shot taken from an entire batch, and automatic low-light adjustments.

The phone’s Google Assistant will also screen spam calls and let you block callers, or answer calls itself and produce a real-time transcription of the conversation, a feature that will get patched into previous Pixel models later this year. Google Lens, Google’s search function that uses computer vision and AI, also comes pre-loaded.

Buyers will still have to choose between 64GB or 128GB of storage with the Pixel 3,  which was with previous models. The smaller model is also getting a better battery, while the Pixel 3 XL has a slightly smaller one. Both phones include a Snapdragon 845, 4GB RAM, front-facing stereo speakers and support for Bluetooth 5.0.

Preorders for both smartphones began Tuesday, but both will officially launch Oct. 18. Buyers will get six months of free YouTube Music service. The Pixel 3 starts at $999 CAD, while the Pixel 3 XL will start at $1,129. The Pixel Stand, a separately sold wireless charger that basically turns the smartphone into a smart speaker that can answer questions, help you control smart home devices and play music, will be available in November via the Google Store and select retail and carrier partners for $109. Both phones will be available for sale at Best Buy, Bell, Costco, Fido, Freedom, Koodo, Rogers, Telus, T-Booth, Videotron, Virgin Mobile, WirelessWave, Walmart, WoW Mobile in the coming weeks.

While it’s not the first tablet to run Chrome OS, it will be Google’s first, and perhaps only realistic attempt, to go head to head with the iPad and Surface Pro, and according to Google, *the* way to experience Chrome OS.

Trond Wuellner, Google’s director of product management, spent a lot of time touting the tablets display, citing it’s 12.3-inch panel with a resolution of 2,000 x 3,000 pixels. The Pixel Slate feels like a solid piece of hardware when held, and comes with 8th Gen Intel processors and 16GB of RAM and 256GB of storage. It also has front-firing stereo speakers and 8-megapixel front and rear facing cameras.

“It also turns into a slim protective case when you’re done with it,” said Wuellner.

The Slate includes two USB-C ports on either side, allowing for 4K output and fast charging. The power button has a fingerprint scanner as well. An optional detachable keyboard – it magnetically attaches itself to the device – basically turns the tablet into a laptop, and is quite expensive at $199 USD. Additionally, many people might frown upon the fact that the device doesn’t have an SD card slot, a headphone jack, or any LTE support.

The Slate appears to function perfectly well without the keyboard, but after a few minutes with the detachable keyboard, navigating the UI became a significantly better experience.

Prices for the various versions are as follows:

Availability to soon follow later this year for U.S., U.K. and Canada.

Google Assistant gets a screen

Google Home Hub is Google Assistant with a face, and is described by Google’s vice-president of product management, Diya Jolly, as a something that creates a more “helpful, thoughtful home.”

Applications such as Search, YouTube, Maps, Photos and Calendar have added voice controls and brief, viewable information that flashes on the screen during use.

What’s most interesting perhaps is the absence of a camera. Unlike the Amazon Echo Show or the Facebook Portal, Google is trying to distance itself from potential privacy concerns that often come with all-seeing assistant devices, resulting in a device that has zero video chat capabilities. Although, as we recently discovered, Google + certainly didn’t need a camera to create significant privacy issues. The Hub features a 7-inch LCD touchscreen display, a “full-range” speaker and Bluetooth 5.0 support.

Google also spent a bunch of time showing off the Hub’s new recipe feature, a step-by-step guide that the company says is a perfect fit for the kitchen. It comes with YouTube support, integrated with Google Assistant voice control, and supports Google’s Voice Match feature, allowing multiple different users’ voices to set reminders, pull up calendars and more. Users will be able to use Hub as a speaker, with support for YouTube Music, Spotify, iHeartRadio and Pandora.

Jolly said that the Hub will be able to support more 200 million connected smart devices from more than 1,000 brands.

The Hub includes six months of free YouTube Premium, and will be available Oct. 22 for $149 USD in the U.S., U.K and Australia. It’ll be available in Canada later this year.