Montreal startup Wajam has picked up three honours from the International Business Awards, popularly known as the Stevie Awards.

Wajambeat out competitors of all sizes and nationalities in itscategories, a coup for the 20-person startup that was founded threeyears ago.

“One of the companies we beat for (online) press room was Accenturewhich has over 200,000 employees. So there’s a lot of high profilecompanies that win. In the social app category, the people who came infirst and third were from Korea, so it’s really an internationalaward,” said Wajam marketing manager Alain Wong. 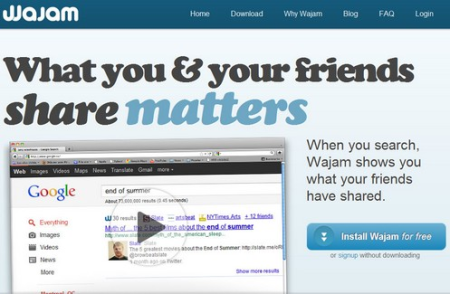 For example, if someone searches for “hotel”, Wajaml will include“likes” for hotel brands posted by the user’s Facebook friends, or anylinks to hotel chain Web sites posted on the user’sincoming Twitter feed. It can also be used for searches onsiteslike Yelp, TripAdvisor, YouTube, eBay and Amazon.

Wajam is just one of several Canadian IBA winners at this year’s Stevie Awards, which will behanded out in Seoul, South Korea on Oct. 15. Afull list of 2012 Stevie Award winners can be found here.

The U.S.-based IBAs are part of the Stevie Awards, which honourcompanies and non-profit organizations from around the world under thebanners of four awards: the IBAs, the American Business Awards, theStevie Awards for Women in Business, and  the Stevie Awardsfor sales and customer service.  This year’s IBAs receivedentries from over 50 countries.

Christine Wonghttp://www.itbusiness.ca
Christine Wong has been an on-air reporter for a national daily show on Rogers TV and at High Tech TV, a weekly news magazine on CTV's Ottawa affiliate. She was also an associate producer at Report On Business Television (now called BNN) and CBC's The Hour With George Stroumboulopoulos. As an associate producer at Slice TV, she helped launch two national daily talk shows, The Mom Show and Three Takes. Recently, she was a Staff Writer at ITBusiness.ca and is now a freelance contributor.
Previous article
Angry Birds teach physics to summer camp students
Next article
HOOPP invests in $213 million NYC tech fund