E-readers are a good example of mobile devices that were quite bad when first launched but have consistently improved with each successive release. With the new Kindle Paperwhite, it’s hard to ask for much more in an e-reader.

Several years ago when e-readers first hit the market the book loading speeds were so slow and screen contrast ratios so poor that I preferred just to stick with the analogue paper glued into a spine. But e-readers in 2015 are too good to ignore and offer an enhanced reading experience over a paper book, plus they’re more comfortable and convenient to use compared to previous generations.

The Kindle Paperwhite 2015 version is an update to Amazon’s flagship e-reader, previously released in 2013. The physical dimensions are the same, with a six-inch screen, but it’s lighter and has some improved specs. There’s now 4 GB of storage, enough to hold thousands of books, and the screen resolution is higher than it was previous.

Amazon pitches the lighter weight as a quality that allows for easier one-handed reading. I did find that to be true as this device is so light that you can easily cradle it in your palm and use your thumb to flip through the pages. Compared to an iPad mini, which I’ve also used as an e-reader, it is just a fraction of the weight and the size is much easier to grip. I really appreciated that since my morning commute always involves coffee in one hand, an e-reader in the other.

This e-reader is a simple piece of technology, as it should be. The box doesn’t include an adapter for charging, but it does have a USB cable and you can charge off a laptop. Or if you’re like me you’ve acquired several adapters that allow you to plug any USB cord into an outlet.

Other than that, using the device is as simple as tapping on the screen. When reading there are three different panes that will produce different results when tapped. The one on the right goes to the next page, the one on the left the previous page, and the one on top opens a menu.

The menu doesn’t offer anything different from other Kindle e-readers. But if you’re not familiar, you should know that you can change your font size, share a snippet of the book, set a bookmark, or jump to a different page. Another interesting feature called “X-Ray” breaks down elements of a book such as characters, terms, and images. It also offers a condensed timeline to remind you of what’s happened in the book previously.

Also in the menu is a control for the device’s backlight. This is a very important one as I quickly learned while using this e-reader. I boldly took the device camping, deep into the backcountry of Ontario’s Killarney Park (very far from any power outlets). After setting up camp, I dumped myself into a hammock with my Paperwhite and got ready to enjoy some reading, only to be disappointed when I opened the case to find the “battery dead” icon. 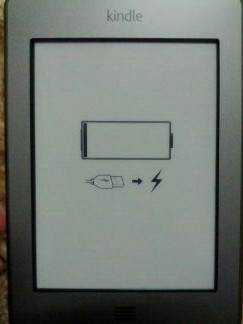 I’d charged the Paperwhite before bringing it on the trip and Amazon says that a full charge can last up to six weeks assuming about 30 minutes of reading a day. That’s a total of 21 hours of reading, and I hadn’t even read it once since charging it.

I figure what happened is related to my use of the Kindle Paperwhite cover. Since this cover can trigger the device to turn on when it opens, having it jostle around in my camping backpack could be turning the device on and off repeatedly. Also, I had the backlight turned on all the way for reading in the dark previously and no doubt that will tax the battery.

So, I recommend turning this e-reader off when you’re done with it (most e-readers won’t use any battery unless you’re changing what’s on the screen). Also, keep the backlight at a minimum unless you really need it. If you want to use the cover, also keep in mind that opening it will cause the e-reader to turn on.

Any review of an Amazon e-reader can’t ignore the great store feature. Amazon’s real strength is providing endless content to purchase for its devices and it makes it easy to do so, with one click on the shopping cart icon in the menu taking you to the storefront. Aside from books, you’re also able to subscribe to Candian daily newspapers and magazines, which seems quite appealing to keep your device stocked with new material constantly.

I liked the Kindle Paperwhite just fine for e-reading. While it tragically let me down when I was in a hammock and that was one time I just wished I’d brought a paperback, not a Paperwhite, I worked out that issue and was happily reading it afterwards.

But I think the real question people will ask when they buy an e-reader these days is not what the hardware does, but what content ecosystem they want to be beholden to. Buy one Amazon e-reader and you’ll probably stick with Amazon’s e-readers for life since that’s how you’ll be able to access your book collection and newspaper subscriptions. It’s worth noting that out of the box, the Kindle Paperwhite doesn’t support the epub format used by libraries, but apparently there’s a workaround for that posted to a Kindle forum.

Amazon Inc. launched its Kindle Unlimited service in Canada on Thursday, adding e-books to the forms of digital content that Canadians can subscribe to access in unlimited amounts. Kindle Unlimited allows customers using

Amazon.ca’s latest tablet, the Kindle Fire HD, is now available for pre-order in Canada – and it also comes at a nifty price tag, starting at less than $300. Coming in at either

Other e-readers on the market also do a fine job of letting you read, which is a simple thing for technology to achieve. I personally can’t see myself fitting in an e-reader to my daily devices that I carry around, especially when I can just read e-books on my smartphone.

But if you read enough and Amazon’s content ecosystem is where you want to tie your ribbon, you won’t be disappointed here. The new Kindle Paperwhite costs $139.99 Canadian and the leather cover is another $39.99.