IDC predictions for 2017: Next tech frontier is ‘augmented humanity’ 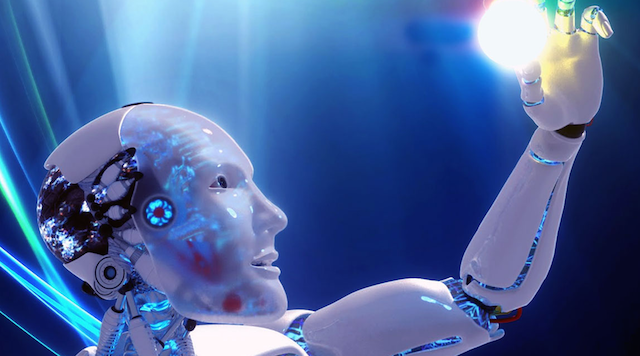 Get ready for the era of augmented humanity.

Global research powerhouse IDC says the next era of IT transformation will marry technology with biology to take the human mind and body to unprecedented levels of mental and physical capability.

That was one of the top worldwide IT predictions for 2017 as outlined Tuesday by Frank Gens, senior vice-president and chief analyst at IDC.

Gens dubbed IDC’s augmented humanity concept its new “fourth platform.” Over the past few years, IDC has been laying out its view of a “third platform” consisting of cloud, mobile, social and big data/analytics. As described by Gens on Tuesday, the fourth platform of augmented humanity pushes the current wearable technology trend beyond skin-deep layers into “cellular and sub-cellular levels” of our biology.

Major tenets of the fourth platform include augmented sensing, augmented memory and cognition, augmented mobility, embedded or injectable technology and augmented identity. Some augmented humanity applications cited by Gens will be purely medical, such as brain implants being developed by the U.S. military to treat memory loss.

But other examples mentioned by Gens would have clear commercial uses, like a smart tattoo created at the Massachusetts Institute of Technology to remotely control a user’s smartphone.

Gens said augmented humanity is now in an “innovation stage” that will probably last until 2021 before entering an “early adopters” stage between 2021 and 2026. He foresees the trend becoming “early mainstream” in 2026 – just a decade from now.

“The fourth platform is really going to roll out over the next 10 years (but) the next four years will be crucial,” Gens said.

As with any new technology, augmented humanity is sure to raise questions – and eyebrows – as it evolves.

“We predict ethical and legal issues will come with the fourth platform hand in glove … and create a lot of controversy and debate – and for good reasons,” said Gens.

IDC had plenty of other prognostications for the coming years. Here are some of the highlights.

Third platform techs: By 2019, mobile, cloud, big data and social will drive nearly 75 per cent of all IT spending, growing at twice the rate of the total IT market. Technologies currently seen as innovation accelerators – artificial intelligence (AI), Internet of Things (IoT), augmented/virtual reality (AR/VR) and blockchain – will become “mainstream” by then, said Gens.

How? According to IDC, cloud will boost the capacity of AI and cognitive computing; cloud-based encryption, threat analytics, compliance and blockchain will become the backbones of trust and security within business transactions and operations; businesses themselves will move beyond simply being consumers of cloud services to provide cloud-based services and products to their own customers.

In addition, we’ll witness the rise of what IDC calls “industry collaborative clouds,” which will triple to a total of 450 by 2018. Gens said organizations will flock to these clouds – formed around vertical industry subsets where members contribute to “a common goal” – to save time and money.

AI/cognitive computing: By 2019, 40 per cent of digital transformation initiatives and 100 per cent of IoT initiatives will be supported by AI/cognitive capabilities, IDC predicts. Over 110 million consumer devices with embedded intelligent assistants will likely be installed in U.S. households by that year, IDC added.

Enterprises might want to boost their AI skills and talent pool, since IDC believes 75 per cent of all developer teams will include AI/cognitive functionality in one or more of the applications or services they produce within the next two years.

Developer teams: Flowing out of that demand for AI apps, IDC expects developer teams to double or triple their current size by 2018 as enterprises continue to transform their businesses through AI and other digital technologies.

Open source: IDC sees developer teams sourcing more than 80 per cent of their solution components from open source communities by 2020.

AR/VR: The monthly active base of consumers using mobile VR apps could top 400 million in 2018. Gens said social media is poised to “go immersive,” with over 20 per cent of commercial media on Facebook featuring 360-degree VR by 2020.

IT channel changes: Although some observers thought SaaS would kill the traditional IT distribution channel, Gens said the proliferation of cloud will actually help transform that old model. As the size and sophistication of the cloud grows, so does the need for integrators and industry-specific offerings, he explained.

By 2018, major IT distributors will transition at least one-third of their business from hardware sales to cloud services, sales or brokering, IDC suggests.

Christine Wonghttp://www.itbusiness.ca
Christine Wong has been an on-air reporter for a national daily show on Rogers TV and at High Tech TV, a weekly news magazine on CTV's Ottawa affiliate. She was also an associate producer at Report On Business Television (now called BNN) and CBC's The Hour With George Stroumboulopoulos. As an associate producer at Slice TV, she helped launch two national daily talk shows, The Mom Show and Three Takes. Recently, she was a Staff Writer at ITBusiness.ca and is now a freelance contributor.
Previous article
Mining CIOs agree credibility is key to leading digital transformation
Next article
4 digital transformation lessons businesses can learn from creatives