Sophos announced a new version of its Safeguard Encryption suite that it says addresses today’s mobile-driven, multi-platform IT environment by taking a data-first approach to encryption.

Sophos SafeGuard Encryption version 6.1 is being launched this morning with a live video from the UK-based security software vendor. With the update, Sophos is adding modules to run on Mac, Windows 8, and iOS and Android mobile devices. With CEO Kris Hagerman appearing in the live webcast to announce the availability of its new software – available through Sophos channel partners – the importance of this launch is clear, says Marty Ward, the vice-president of product marketing for Sophos.

“We think it’s a big deal, we think it’s a huge opportunity for us,” he says. “It’s at the tipping point now where encryption is really prime-time.”

Operating in an IT business environment means sometimes dealing with sensitive data that outsider want to get their hands on. Encryption is a crucial tool used to keep data secure and in the hands of only the people with permission to access it. Encryption software uses advanced cryptographic algorithms to scramble data, and allows those with the right key to unscramble it and read the file. But problems often arise in trying to do this with all of your data – it might take too long to encrypt a large file, or a file you encrypted on a Windows PC might not be readable on a Mac.

Sophos says it wants to make encryption both useable and high performance with its SafeGuard products. The performance comes from using the native encryption methods provided by both Microsoft Corp. (Windows BitLocker) and Apple Inc. (FileVault 2) to make sure encryption is done as fast as possible. 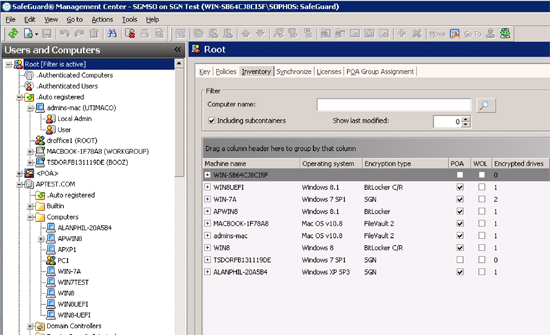 “All encryption engines are pretty much the same,” Ward explains. “That’s not the problem any more, the problem is performance and usability.”

The usability part for Sophos comes from the ability to manage encrypted data across all devices from one management console. An IT administrator sets policies on how and when data is encrypted, and the users given permission by the organization can simply access and share files as they normally would. SafeGuard serves as the bridge between a Windows and a Mac, or a mobile device, or the cloud.

“If you use one platform to manage the encryption, you have control over the keys from beginning to end,” Ward says. “From the user perspective, you don’t have to worry about it at all, you just share data however you want.”

Past versions of SafeGuard have allowed full disk encryption and file-level encryption on Windows PCs, but this is the first version that ties it all together with data-centric encryption across multiple platforms. That’s important for today’s businesses that often work in a bring your own device (BYOD) environment, or some other scenario where multiple platforms are being used by workers to collaborate and access files. Sophos hopes  it has solved the problem of IT administrators exchanging unencrypted data in some circumstances.

“Eighty per cent of laptops out there today aren’t encrypted because of the performance and usability hit, those issues have been addressed,” Ward says. “When you throw in mobile devices and tablets now, those are different operating systems, so it’s impossible to find a company that is single platform right now.”

Employees protected by the new version of SafeGuard could even upload files to public cloud storage services like Dropbox, typically a scenario dreaded by security administrators. It would be encrypted at the file level and then only accessible to someone else in the organization able to download it and read it with the right key.

Pricing for the core platform of SafeGuard Encryption begins at US$40 per user per year. It goes up from there based on what modules you’re using.

Brian Jacksonhttp://www.itbusiness.ca
Editorial director of IT World Canada. Covering technology as it applies to business users. Multiple COPA award winner and now judge. Paddles a canoe as much as possible.
Previous articleSamsung releasing PRO line of tablets in Canada Feb. 28
Next articleGoing to Sochi? How to avoid an Olympic hack attack