South Korea-based Samsung Corp. is set to unleash four new tablets in its Pro series on Feb. 28 in Canada, making good on the announcement it made at the Consumer Electronics Show that it would launch a professional line of tablets that combine premium hardware specs with a productivity software package.

The new Samsung tablets are the Galaxy NotePro 12.2, Galaxy TabPro 12.2, Galaxy TabPro 10.1, and Galaxy TabPro 8.4. Like its other consumer-focused tablet lines, the Pro series is Android-based. But Samsung has taken its proprietary software layer to a new level here and added features that you’d expect from a desktop-style OS. For example, users can run multiple apps on the screen at once and can even have content overlaid in a pop-out window. The Pro series supports multiple user accounts on a single tablet, and can be operated with a mouse and keyboard in a laptop style. 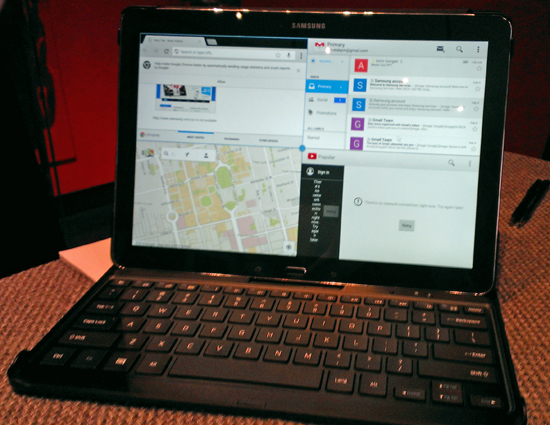 Demonstrated to ITBusiness.ca at a Toronto media event, Samsung described its NotePro 12.2 as a multi-tasking device suitable for users interested in creating content, not just consuming it. It also wasn’t shy about targeting the number one player in the tablet market, Apple Inc. and the iPad.

Samsung’s Pro line of tablets come packed with included software perks to set them apart from consumer tablets. For example, Hancom Office is pre-installed. It’s a Korean-made productivity suite that offers 85 per cent compatibility with Microsoft Office, according to Samsung. A viewer version comes pre-loaded on the tablets to allow users to read documents and spreadsheets, and users can also download a full version to edit and create documents for free from Samsung’s app store.

A new feature from Samsung called e-Meeting is exclusive to its Pro line of tablets at the moment. It allows several users to connect their tablets via Wi-Fi Direct to view a presentation and exchange messages. A presenter can annotate their screen and it will be displayed live to those viewing it.

Remote PC is a virtual desktop app that allows users to connect with a Windows or Mac computer. Its integrated so files can even be dragged and dropped out of the virtual OS window and onto the Android desktop. Of course, the devices can be used with Samsung’s Knox service to segregate personal files from business files, allowing IT administrators to lock down security settings on the “work” portion of the device.

While Samsung says it’s targeting Apple, the Pro tablets may also appeal to enterprises that would consider professional tablets like HP’s ElitePad that runs Windows 7 or Windows 8.

“With that Tab Pro 12.2 we’re definitely hoping for an extension of our lineup,” Lalovic says. “It’s something that can truly replace a PC. We believe there’s a market there.”

There’s also lots of premium software services included with a Pro tablet purchase. Samsung is offering a year’s subscription to Evernote’s premium note syncing service, 50 GB of Dropbox space for two years, six months of Cisco’s WebEx conferencing service, and three months free to Next Issue, which is like a Netflix service for magazines.

Here’s the specs and Canadian pricing details for each device:

The NotePro tablet comes with Samsung’s S-Pen that allows users to interact with the device by drawing on the screen and to take handwritten notes. The device is powered by an octa-core chipset that integrates two CPUs — a 1.9 GHz quad-core and a 1.3 GHz quad-core. There’s 3 GB of RAM, and options for 32 GB or 64 GB of on-board storage and expandable memory with a microSD memory slot. There’s also a USB 3.0 port for peripherals. There’s support for the newest WiFi 802.11 AC standard, Wi-Fi Direct, and Bluetooth. The rear camera offers 8 megapixel resolution and the front 2 megapixels. It weighs 750 grams and is just under 8 mm thick. The battery is rated at 9500 mAH and Samsung says it can play media for 10 hours before needing a recharge.

The TabPro 12.2 is the same device as above, but sold without Samsung’s S-Pen. The price is $669. Keep in mind that while the 12.2 models are just two inches bigger across the diagonal, when you consider the total amount of screen space, it’s 43 per cent more than the 10.1-inch model.

The smaller device shares a lot in common with the 12.2-inch models in terms of the cameras on the front and rear and the display’s high resolution. Instead of two CPUs, there is a 2.3 GHz CPU complemented by a separate GPU. It has 2 GB of RAM and the internal storage options are 16 GB or 32 GB. It’s a bit thinner than the 12.2-inch model, at 7.3 mm and it weights 477 grams (that’s just over one pound).

In Canada, this tablet will retail for $519.

The smallest member of the Pro series doesn’t compromise much in the way of hardware; it’s got everything the 10.1 model offers in a smaller package. It’s 7.2 mm thick and it weighs 331 grams. The Canadian price is $419.

A Bluetooth keyboard case for the 12.2-inch tablets will be out around the same time and is priced at $129.99 and Samsung’s mouse is $39.99. But Samsung points out any Bluetooth peripherals will be compatible with the tablet. A USB to Ethernet dongle will be available for $69.99 for those who like a reliable wired Internet connection when possible.

In April, Samsung will release a $199 wireless Bluetooth soundbar with a microphone that is suitable as a teleconferencing peripheral.