Google Inc. announced a new service today that travellers can use to plan their next vacation – and it’s mobile-only.

Powered by the same engine as the company’s signature search, Google Destinations provides would-be travellers with an interactive guide that starts by highlighting where they might want to visit and what they might want to do when they get there, based on a mix of recommendations from the travel experts at Google subsidiaries Zagat and Frommer’s and what the anonymous data collected by Google Maps indicates travellers have done in the past.

“We realized that… people use all of these other pages, then come back to our page. Then they go out again and they come back. And so we realized there’s a piece missing, which is the experience,” Google project manager Stefan Frank, who led the service’s development, said.

Users can also adjust their results according to such factors as date, time, number of travellers, interests, and budget.

For example, the German-born Frank used Destinations to illustrate how travellers could spend a day exploring the Berlin wall and learning about the Cold War, and outlined a popular five-day trip that many have taken through southern Germany to visit the country’s many castles. 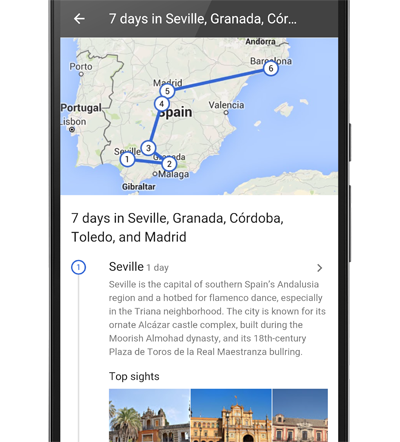 Each destination also includes links to a series of related video guides, curated by Frommer’s and Zagat staff to make sure they accurately present a country.

The service even provides a weather forecast based on when you’re planning to visit, and can tell you which times of year are most popular for tourists.

Destinations’ roots stretch back at least four years, though as with many projects at Google, Frank said that Destinations incorporates several discrete components that were developed before they had a specific purpose in mind.

Two, a pair of services that allow users to purchase airline tickets or hotel rooms through Google from certain partners, were only recently incorporated into Destinations, though they had been available for some time. Thanks to both services, an initial search on Google Destinations includes a range of prices, complete with a graph that users can adjust to see how much bang they can receive for their buck. 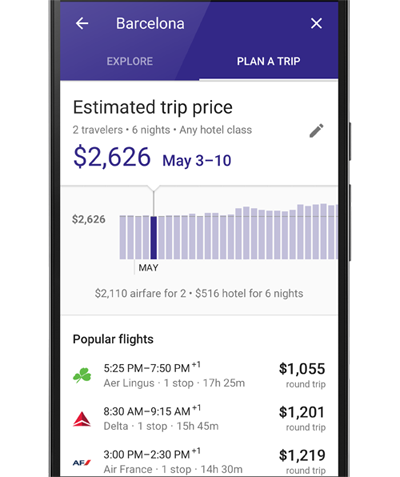 While the company hasn’t officially announced its partners for Destinations, Frank admitted that certain airlines may not appear among the service’s flight suggestions, and that few hostels are currently part of its accommodation network – nor is AirBNB. And while there are plans to launch a desktop version, Frank said that Google doesn’t have a timeline yet.

Frank himself has already used the service, during a recent visit to Santiago, Chile, where it directed him to a museum dedicated to poet Pablo Neruda.

“I can honestly say it made my trip better,” he said.

Eric Emin Wood
Former editor of ITBusiness.ca turned consultant with public relations firm Porter Novelli. When not writing for the tech industry enjoys photography, movies, travelling, the Oxford comma, and will talk your ear off about animation if you give him an opening.
Previous articleRoundup: How tech firms are celebrating International Women’s Day
Next articleStaples Canada and Thinking Capital launch online small business loan service