TORONTO – In last night’s thrilling come from behind victory by the Toronto Raptors over Indiana Pacers in Game 5 of the opening round NBA playoffs the official game clock played an integral role in the outcome.

With 2.7 seconds left in the game, the Raptors held a slim three point lead with the series tied at two games apiece. The Pacers, however, held possession of the ball with a chance to tie the game and send it into overtime.

At that point in the game, the Raptors overcame a fourth quarter deficit of 13 points and held the Pacers to just a measly nine points in the quarter.

The Pacers inbounded the ball to their superstar player Paul George who lit up the Raptors this evening for 39 points, but he was quickly double-teamed and decided to pass the ball to a wide open Solomon Hill who was behind the three-point line as the clock ticked down to zeros. The ending of this game held true to the sporting vernacular of “the game is on the line.” 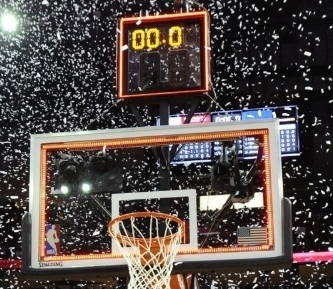 Hill made the shot to the dismay of the hometown crowd at the Air Canada Centre and in that moment the Pacers and Raptors thought they were going to play overtime to decide Game 5 of their playoff series.

But that’s when time – more specifically Tissot time – stepped in.

Tissot, a Swiss watchmaker since 1853, became the first official timekeeper of the NBA this season. Tissot developed a Collaborative Integrated Timing System for the NBA under a multi-year global partnership that will also see this technology used in WNBA games and NBA D-League games.

The NBA deal is Tissot’s largest business arrangement in the company’s history and is said to be worth $200 million, according to Bloomberg.

The Tissot Collaborative Integrated Timing System operates the official game clock and next year will do the 24-second shot clock. What made last night’s game more interesting is that without accurate time being kept who knows if Hill’s shot would have counted? If this game was played last year, the outcome could have been different because the Tissot Collaborative Integrated Timing System was not in place.

NBA Commissioner Adam Silver, in regards to the Tissot partnership, said “in basketball every second – or even tenth of a second – can be critical, and this new partnership with Tissot will bring state-of-the-art timing technology to every NBA arena.”

That statement held true in last night’s game as the referees reviewed Hill’s three-pointer to see if the clock did expire before the ball left Hill’s hands. After review, the referees clearly saw the 0.0 on the Tissot game clock as Hill still had the ball on his fingertips. The three-pointer did not count and the Raptors won the game.

Tissot has been keeping the time for other sporting events besides the NBA.

Recently Tissot became the official timekeeper of the Liege-Bastogne-Liege cycling race nicknamed the “Old Lady” because it’s been going on since 1892 in the Ardennes region of Belgium.

Besides the Liege-Bastogne-Liege race Tissot will be keeping the time at the Tour De France again this year.

Tissot also keeps time at MotoGP motorcycle races such as the Grand Prix of Spain.

Is the NBA the most tech-savvy league in North America? – Tech...