The Canadian Imperial Bank of Commerce (CIBC) and the Toronto-Dominion Bank have both reached out to customers through their mobile devices this year. CIBC was first out of the gates in February with an iPhone application, and TD launched its iPhone application in April.

Those free applications have proven popular among Canadians – CIBC’s app was downloaded 100,000 times in its first month, and TD’s has been downloaded almost 200,000 times since its release. Both banks have followed up with access for other smartphones.

TD has released both a BlackBerry and Android application, while CIBC has launched www.cibc.mobi for smartphones.

“It’s definitely the way of the future,” says Joan Dal Bianco, vice-president online channel at TD Bank Financial Group. “As we move forward, people are going to skip over being online customers and will become mobile customers.” 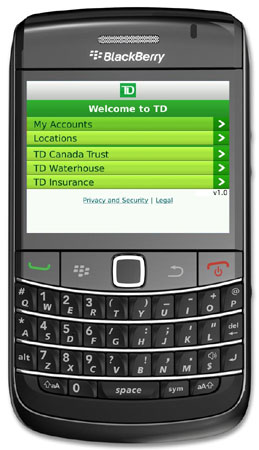 TD’s BlackBerry application has been downloaded nearly 50,000 times thus far, and its Android application 5,000 times since both were launched June 9. The mobile channel has processed 2.5 million log-ins and customers have completed 115,000 bill payments.

New ING Direct app lets you do your banking from BlackBerry, iPhone

CIBC has also seen “millions of mobile transactions” since its iPhone launch, says Christina Kramer, executive vice president of distribution services for CIBC Retail Markets. Mobile banking applications are a way to capitalize on the increasing popularity of smartphones among consumers.

“There’s growing interest in this new way to bank,” she says. “We thought it was a good opportunity to establish an early-on leadership position.”

Both banks are tapping social media to market the new mobile services. In addition to TV and print ads that normally push bank services such as mortgages and chequeing accounts, consumers are learning about mobile banking from Twitter and Facebook.

As part of ‘The CIBC Switch’ campaign, a Flash-based, iPhone-imitating widget designed by Toronto-based Mthirty Communications promotes mobile banking. The widget lists news articles about the applications and users can share the links on Twitter at the click of a button. Another button plays a video demonstration of how the iPhone app works, and the user is also given options to share the widget on Facebook or via e-mail.

“We thought it was really important to invest in marketing to showcase what mobile banking could do for our clients,” Kramer says. “Whenever you’re the first to do something, you have a responsibility to educate.”

TD also has a social media focus for marketing, preparing “social media releases” for news updates related to mobile banking, complete with photos and videos for others to share.

“It’s much more viral in this space,” Dal Bianco says. “People talk to one another about what they’re finding.”

Smartphone users downloading mobile applications are likely also use their devices to access social networks and communicate with friends.

Most application storefronts also include social features, where users can leave comments endorsing or warning way from an application.

So it makes sense to tap new media for this new banking channel.

Users spend an average of one minute to complete a transaction, according to CIBC.

TD is looking to expand its mobile channel in the near future to include more services in the wealth management and insurance areas. That may include stock trading capabilities, Dal Bianco says.

“Don’t be surprised if you see that in the not too distant future,” she says.

Brian Jacksonhttp://www.itbusiness.ca
Editorial director of IT World Canada. Covering technology as it applies to business users. Multiple COPA award winner and now judge. Paddles a canoe as much as possible.
Previous article
SharePoint 2010 – 7 lessons Microsoft learned from eating its own dog food
Next article
Obama wants international clamp down on pirate sites