Businesses are looking to get ahead of the game by seeking explicit consent from email contacts before Canada’s Anti-Spam Legislation (CASL) comes into effect July 1.

Designed to cut down on the amount of unwanted email received by Canadians, CASL requires that companies either have explicit or implied consent to email a contact about business matters. Express consent means a contact has specifically agreed to receive emails from a business, and implied consent means that some sort of pre-existing business relationship exists – for example, a contract is signed. But with the implied consent expiring after two years (or in some just cases six month), many businesses are looking to move as many contacts into the “explicit consent” column as possible. Also, it’s likely that many businesses aren’t even clear on what contacts they have explicit consent for and are confirming with all their contacts to be certain.

The irony is that sending an email request for confirmation of consent could be considered spam after CASL takes effect. A business could ask someone in the “implied consent” category for express consent, but not someone it had no point of contact with. After CASL takes effect, businesses will have a three year grace period to confirm consent in this way. Any express consent collected before CASL comes into effect will be recognized.

Still, proactive business minders like Shawn Freeman, president of Calgary-based TWT Group are getting started now. He sent out an email to his list of contacts for his IT services firm in May. The email simply explained that because of CASL, the firm needed to confirm that the recipient wanted to continue receiving email from the company. Clicking on a “Confirm Consent” brought the recipient to a web form to complete by filling in their information. Then another email was sent to double-confirm the correct email address was used. 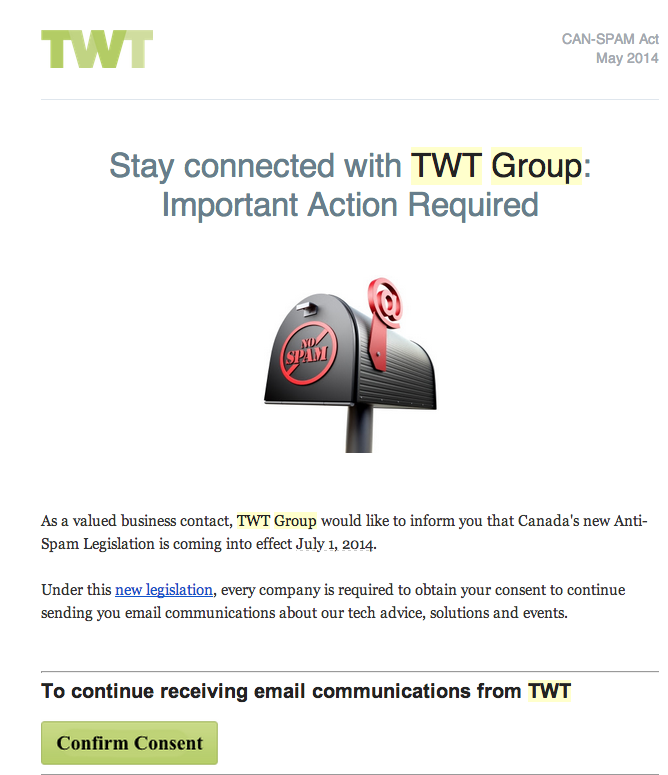 “It makes sense from a business perspective. We can start to use our e-mail list more effectively and we an tell who wants to see our stuff,” he says. “It’s hard to know if what you’re writing is worthy.”

Freeman uses the email list to send out notice of new blog posts. As his practice was to sometimes manually add people he met to the list, he knew he had to take action to be CASL compliant. But he’s taking the approach that doing so is actually a good business practice and if he finds that people don’t want to receive his emails, he has opportunity to change his tactics.

“We’ll be tailoring our content and I think there’s some benefits to that,” he says. “It helps us focus.”

Get ready for CASL:
How the CRTC will enforce CASL
4 answers to the most commonly-asked CASL questions

Freeman will also be adding a line to his email signature that gives people he’s communicating with an option to subscribe to his mailing list. He’s confident that three years from now he’ll have a fully verified list and be in a good place for CASL compliance, when the grace period ends. Freeman didn’t come up with all the tactics to prepare for CASL on his own, his lawyer advised him it was important, so he followed the example set by the Business Development Bank of Canada (BDC) and other law firms going through the process because he liked the approach.

BDC similarly took a direct approach with its email recipients, saying it is required to obtain consent for email as a result of CASL. 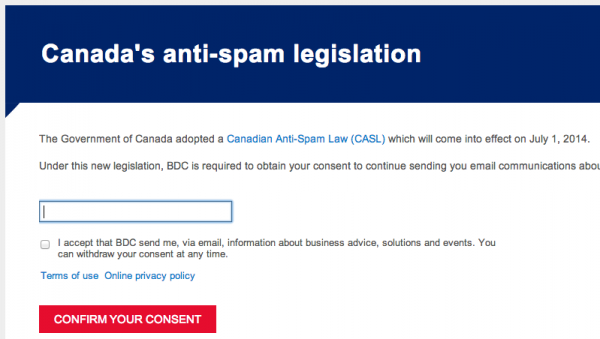 Ford of Canada took a slightly different tack with its CASL compliance efforts. It gives away 10 free entries to win a 2015 Ford Mustang for giving your consent. While CASL is not explicitly mentioned, you can see that the contest rules are under the “CASL” sub-directory of Ford’s website. There’s no double opt-in in Ford’s process, just one click of a button to pass on express consent. 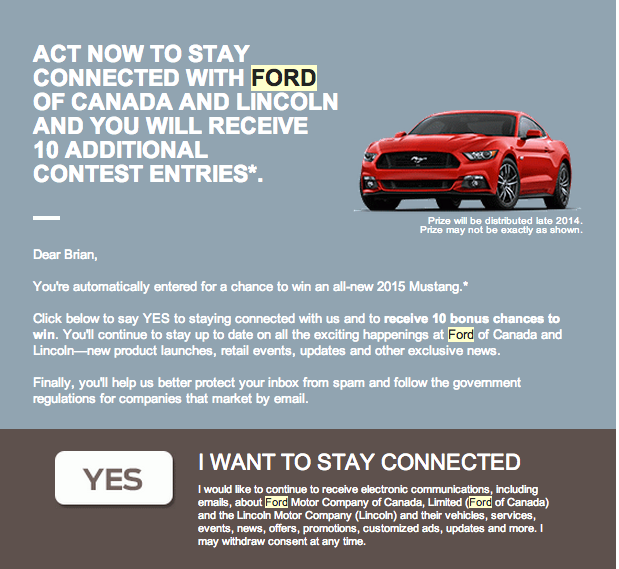 Toronto-based digital agency Delvinia took a more humorous approach to its CASL compliance efforts. Along with an opt-in button, recipients could also click through to take a quiz to test their CASL knowledge. It poses questions like “Will I be able to opt-out of those work emails from that creepy guy in accounting?” The quiz ends with asking if you’d like to remain on the Delvinia contact list in order to see the correct answers. 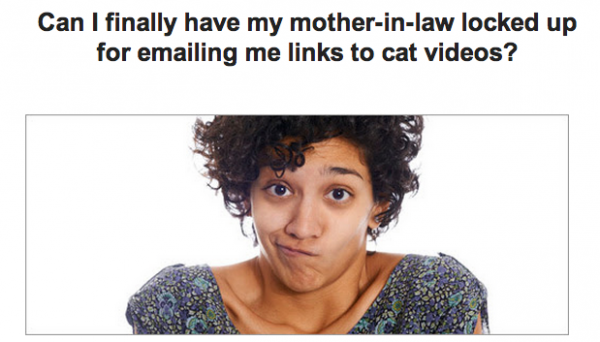 Brian Jacksonhttp://www.itbusiness.ca
Editorial director of IT World Canada. Covering technology as it applies to business users. Multiple COPA award winner and now judge. Paddles a canoe as much as possible.
Previous articleHow hospitals use business intelligence to care for their patients
Next articleGetResponse launches landing page creator tool for marketers

BDC’s Women In Tech fund trying to create a sustainable ecosystem for...