Amika inks another deal for its emergency mass alert system

When shots rang out at a neighbourhood barbecue in suburban Toronto two nights ago, some witnesses used Twitter to post their instant reactions and give on-the-scene accounts of the horrific violence that left two dead and injured almost two dozen.

Amika said today the system is being deployed by the city hallbuildings – and linked up with local fire, police, 911 and EMS services- in Quinte West, a city of 42,000 people 1.5 hours east of Toronto.Last week it announced a deployment at La cite collegiale, a Frenchlanguage college in Ottawa. 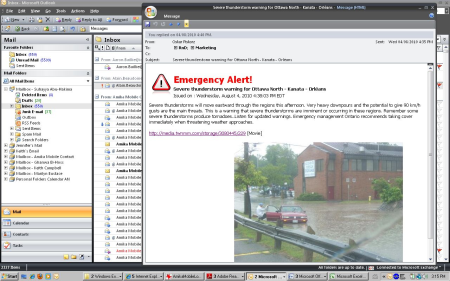 Example of how an Amika emergencyalert would appear on-screen

It’s also been used in a real-life emergency: in March it was employedto evacuate 300 federal government employees at the Shirleys BayCommunications Research Centre near Ottawa after a gas leak broughtfire and hazmat crews to the scene. Two public servants were sent tohospital as a precaution during that incident.

Amika’s system instantly locates and sends alerts to “anyone on wiredor wireless networks within a campus, a building, a floor or a zone(even in a basement), regardless of pre-registration of their computer,email address or phone number,” according to the Amika Web site. Alertsare sent out in the form of emails, SMS texts, or pop-up windows overmobile phones, laptops, handheld devices, or VOIP networks.

Fire, police or security personnel can also target emergency messagesto specific recipients within a defined area if they wish.

ITBusiness Staff
Previous articleCATA pressures government to provide broadband Internet for all
Next articleCanadian entrepreneurs are the world’s most optimistic, eh?