Pre-sale in Canada and the United States for the $449.99-32GB Iconia starts now.

The premiere models in Canada are the Acer A510-10s32 (silver) and Acer A510-10k32 (black). Customers can purchase a sleek protective case to protect the Acer A510 tablet. The snug-fitting design prevents slipping on surfaces and props it up for improved access for game-playing and typing. It also allows convenient access to the connectors and ports. It is available through Acer at a price of $39.99.

The tablet has a 10.1-inch screen, and the device is designed for video and mobile gaming, Acer said in a statement. Acer until now has offered only dual-core tablets, and the latest tablet is the first with a quad-core processor.

Acer’s competitors that have already announced or are shipping quad-core Android tablets includes Asus, Lenovo and others.

Acer estimates the A510 tablet can provide 12 hours of video playback time. The Asus Eee Pad Transformer quad-core tablet in the past received positive reviews partly for long battery life.

The A510 tablet has a screen that displays images at a 1280-by-800 pixel resolution, which is comparable to screens on other Android tablets. However, the A510 screen pales in comparison to the 2048-by-1536 resolution display of Apple’s new iPad, which started shipping last week. The A510 can display 720p images, Acer said, while Apple’s iPad can display full 1080p high-definition images because of the high-resolution screen. 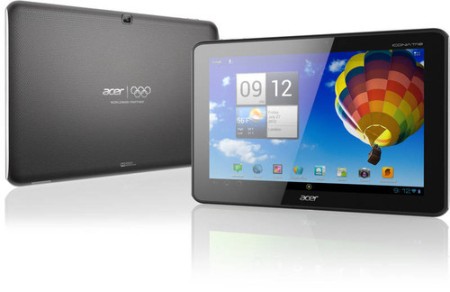 The Acer Iconia Tab A510

The tablet incorporates Nvidia’s Tegra 3 quad-core processor, which has four Cortex-A9 CPUs and 12 graphics cores. The chip in some cases can outperform the new iPad’s A5X chip on graphics performance, according to benchmarks conducted by independent reviewers like Laptop Magazine. Apple at the new iPad launch event earlier this month said that the A5X chip could outperform the Tegra 3 chip, a claim disputed by Nvidia.

The Iconia Tab A510 comes with Android 4.0 and the productivity suite Polaris Office 3.5, which offers compatibility with Microsoft Office document formats. The tablet has micro-HDMI and microUSB 2.0 ports, a microSD card reader, 1GB of RAM and 32GB of storage. The tablet has a 1-megapixel front camera and a 5-megapixel rear camera that can take full 1080p videos, which can then be played on HDTV sets via an HDMI connection.

The announcement is related to the U.S. and Canada only, an Acer spokeswoman said. She could not provide further information on when the tablet would ship in the U.S. or worldwide.