Acer on Wednesday announced new Timeline Ultra M5 ultrabooks starting at $799.99 that will be upgradable to Microsoft’s upcoming Windows 8 Pro for $14.99.

They will be available at leading retailers across Canadabeginning at the end of June. Canadian prices begin at $799.99 andrange up to $1,299.99.

The ultrabooks are just 20.54millimeters thick with a starting weightof 1.95 kilograms and come with 14-inch and 15.6-inch screens. Two ofthe Timeline laptops starting at $779.99 have Intel’s latestprocessors, code-named Ivy Bridge, while the $679.99 model has Intel’solder and slower Core processor, code-named Sandy Bridge. 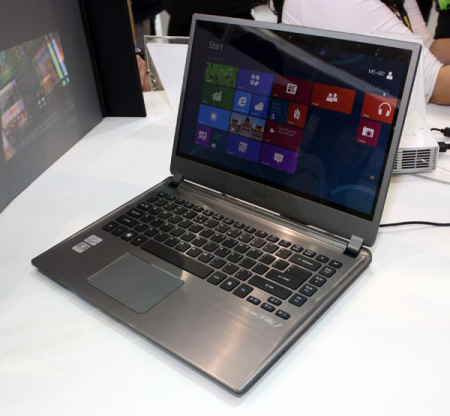 The laptops come with Windows 7 Home Basic, Home Premium, Professionalor Ultimate, and users can move to Windows 8 Pro by purchasing theupgrade from Microsoft’swebsite. The offer is valid through Jan. 31 next year.Microsoft has not yet announced a specific release date for Windows 8.

The laptops have a 1.3-megapixel webcam, two USB 3.0 drives and up to500GB of hard-drive storage. An anti-theft features allows laptops tobe disabled in case of theft, and to be enabled when found.

The laptops offer up to eight hours of battery life. As in Canada, thesystems willbecome available in the U.S. at the end of June. The company did notimmediately comment on worldwide availability.