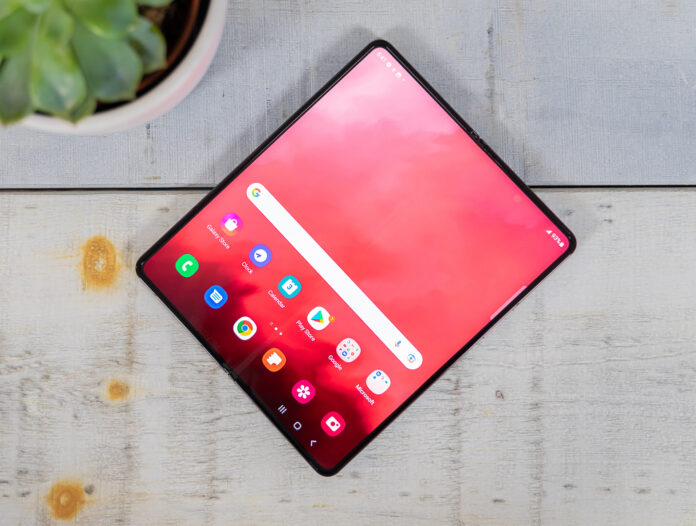 The Galaxy Z Fold 4 5G smartphone, with its iconic bendy screen, dropped at Samsung Galaxy Unpacked 2022 on Aug. 10. I was lucky enough to play around with it for an hour at Samsung Canada’s office in Toronto. Here are my thoughts.

What’s new at a glance

Side by side, you’d be hard put to tell the old from the new. Samsung told me that the hinge is now narrower. There’s an aspect ratio change for the main display, and the cover display’s resolution has increased slightly.

No one should be surprised by the Galaxy Z Fold 4’s extra bulk. The device is a good bit thicker than a regular smartphone when folded, and I definitely felt its extra grams when it sat in my pocket. With that said, it wasn’t heavy to the point of being obtrusive, and I was pleasantly surprised to see how well it fits, thanks to its narrow body.

The 7.6-inch Dynamic AMOLED display is as stunning as ever, providing an expansive view for consuming all kinds of media. With a 120Hz refresh rate, vibrant colours and sharp contrast, the Galaxy Z Fold 4’s display unleashes the best viewing experience of any smartphone. Like the last iteration, Samsung pre-applied a screen protector on the main display, which is covered under the one-year manufacturer’s warranty.

Because the display folds, the phone can act as its own stand. Samsung has taken advantage of this feature and even dubbed it “Flex Mode.” For example, when the phone is folded at a right angle, YouTube can play on the top half of the screen. The same applies to the camera app; the operating system smartly divides up the preview pane and the control pane between the top and bottom half. I can see this being very appealing for streamers.

What about the crease? That remains to be seen. The demo units are still very new, so it wasn’t apparent. Samsung didn’t mention whether it has worked to reduce the crease’s prominence, and our hands-on time was way too short to test it. Reading other reviews of the Galaxy Z Fold 4 suggests that the crease is far less noticeable than people believe. If the glass is as good as the previous generation, then it shouldn’t pose much of an issue.

Multitasking that would be cramped on a regular smartphone feels natural on the Galaxy Z Fold 4’s commodious display. The capacious screen allows three apps to comfortably open simultaneously, reducing the frequency at which the user switches between apps during a busy day. For example, the user can keep the email app open on one side and still have enough room to jot written notes with the S Pen.

Here’s where the first major disappointment appeared. I was dismayed to hear that the S Pen will not be included with the Galaxy Z Fold 4. The inclusion of the S Pen was one of the most highly-requested additions from fans since the main display practically begs to be written on. To get it, users need to pay $50 for the passive S Pen Fold edition, or $100 for the active S Pen Pro with a Bluetooth connection.

Although the S Pen now magnetically attaches to the back of the phone, it still isn’t as convenient as an internal storage slot. Users can buy a case with a pen slot if they’re willing to live with even more bulk and weight.

When it’s closed, users can still operate the Galaxy Z Fold 4 using its 6.4-inch front display. I believe this is one of the features that made Samsung’s Fold series so successful. Without it, there would be an annoying extra step, to have to open the phone just to check for a message, as it was with my experience with the Microsoft Surface Duo.

Although the front display may be too narrow for larger hands, it does make one-handed operation much easier. Boasting the same gorgeous colours and responsiveness as the main display, it can even be enjoyable for light gaming. The limited number of apps I tested at the hands-on event was able to seamlessly transition between the front display and main display. Testing with more apps will have to wait until the full review.

Under the hood, the Galaxy Z Fold 4 uses a Qualcomm Snapdragon 8+ Gen 1 paired with 12GB of memory. The processor is a step up from the Snapdragon 888 of the previous generation and juggled multiple apps with ease. The large memory pool also helped to keep things snappy when faced with stacks of background apps.

Furthermore, the storage option has been expanded to include a 1 TB configuration in some markets (though apparently not in Canada, at least to begin with), double the maximum of the Galaxy Z Fold 3.

The gaming test will have to wait until the full review, but I’m not expecting anything less than excellent in that category either. Once again, there’s no MicroSD card slot or headphone jack.

Battery capacity remained the same gen-on-gen, raising the concern that the Galaxy Z Fold 4 may suffer the same lacklustre battery life as the previous generation. While the 4,400 mAh battery would’ve been ample for a regular smartphone, it struggled to power the Galaxy Z Fold 3’s large display. We’ll be able to dig into its endurance in the full review. The phone supports wired charging at 25W or wireless charging at 15W.

Samsung told me that the hinge is even more durable than the last generation, capable of opening and closing at least 200,000 times. Although I feel like Samsung has already surmounted the hinge issues that plagued the earlier versions, any improvement on a proven design is welcomed.

The IPX8 rating returns on the Galaxy Z Fold 4. This means that the phone can survive a quick dunk in the pool and should have no trouble in the rain. Users still have to take care to prevent dust from breaching the device, however, as it isn’t rated for dust ingress protection.

The phone will ship with Samsung’s One UI 4.1 operating system, and will be updated to the One UI 5.0 once it releases. The OS worked well during my hands-on, seamlessly switching apps between the cover and main displays, and in other normal operations. Samsung said it has worked with Microsoft to optimize its productivity suite on the device, an important consideration for productivity.

In terms of cameras, the Samsung Galaxy has five: three in the rear camera array, one under the main display, and another in the cover display. Let’s start with the rear cameras.

It’s in this category that the Galaxy Z Fold 4 has received a major upgrade. Whereas the Galaxy Z Fold 3 came with three modest 12MP shooters split among ultrawide, wide, and 3x telephoto cameras, the Fold 4’s main camera has been updated to a brand new 50MP sensor. It snapped detailed, vivid shots of the decor in Samsung’s showroom cast in studio lighting. Because of the time constraint, I was unable to test its performance in low light conditions.

One of the Galaxy Z Fold 3’s greatest flaws was its in-display camera in the main sensor. I can’t say whether the Galaxy Z Fold 4 is a step up, but it held up fine with good lighting. Image clarity didn’t feel hampered by the low-resolution 4MP sensor.

Interestingly, Samsung has installed a 10MP sensor for the  Galaxy Z Fold 4’s telephoto camera, an apparent downgrade from the 12MP sensor used for the previous generation. The sensor has the same pixel size as well so it seems like it’s just straight up smaller. Pixel size is just one of the many facets of camera quality, however. Maybe the new sensor has some technological improvement under the hood. We’ll have to do more testing to see how they compare.

For biometrics, there’s a fingerprint sensor embedded within the power button, and support for basic 2D facial recognition. The phone has also been hardened with “defence-grade” Samsung Knox security.

The Samsung Galaxy Z Fold 4 seems to hit most of the right points to push foldables closer to true mainstream. Aside from its faster processor and expanded storage, the new 50MP sensor should bring its camera performance close to that of other flagships. You’ll have to pay for that upgrade, however, as the starting price of the Galaxy Z Fold 4 is C$375 higher than the previous version with the same storage.

Still, the Z Galaxy Fold 4 inherits a few old problems from the previous generation, mainly the concern around battery life and the lack of an included S Pen. It also sucks that Canada will not be receiving the model with 1TB of storage. It’s unclear whether Samsung will bring that option to the great north in the future.

What alternatives do consumers have? Not many for now, at least in the local market. Samsung is currently dominating the foldable phone market in North America. The closest competitor in Canada and the U.S. today is the Microsoft Surface Duo 2 which, in my opinion, is less polished in both design and software.

In Canada, The Samsung Galaxy Z Fold 4 is available for pre-order starting Aug. 10 and will ship on Aug. 26.

Tom Li
Telecommunication and consumer hardware are Tom's main beats at IT Business. He loves to talk about Canada's network infrastructure, semiconductor products, and of course, anything hot and new in the consumer technology space. You'll also occasionally see his name appended to articles on cloud, security, and SaaS-related news. If you're ever up for a lengthy discussion about the nuances of each of the above sectors or have an upcoming product that people will love, feel free to drop him a line at tli@itwc.ca.
Previous articleHootsuite to lay off 30 per cent of its staff
Next articleHashtag Trending August 11 – Meta worries about idle workforce; Microsoft disbands prosumer team; Google grills Apple over texting beef