It takes a (networked) village to make women successful

At the 23rd annual Women in Technology International (WITI) conference, held the week of June 11 in San Jose, no one stood alone.

In the opening keynote, the audience was told that if you see someone alone, bring them into the group. Standing alone is something women experience too often in the work force, but not at this conference where there were lots of discussions, mentoring and networking.

There is a shortage of women in the science, technology, engineering and mathematic (STEM) fields. According to the keynote speaker, 451 Alliance’s Katie Broderick, while women earn most of the bachelor’s degrees, only 31 per cent are in STEM.

How do we get more women into STEM? By engaging young women early, Broderick said. We need to begin discussions and drive awareness in high school, or even before, since research shows that career decisions are made early in life, with 42 per cent deciding by grade 12.

In surveys of over 700 women asking why they entered the STEM field, compensation came in third, while interest and attitude were reasons number one and two respectively. Interestingly, career satisfaction depended on when the respondent decided to enter the field. If the decision was made in grade school, the satisfaction rate was 10 per cent higher than if it was made in graduate school (68 per cent vs. 58 per cent).

On the one hand, women in STEM tend to want to advance to the C-suite or – surprisingly, I think – to entrepreneurs. On the other, the top reason for leaving the STEM field for the under 50 year olds is to move on to a better job. Unfortunately for the over 50-year-old set, the top reason they leave is they were laid off, which shows that STEM industries discriminate by age as well as gender. 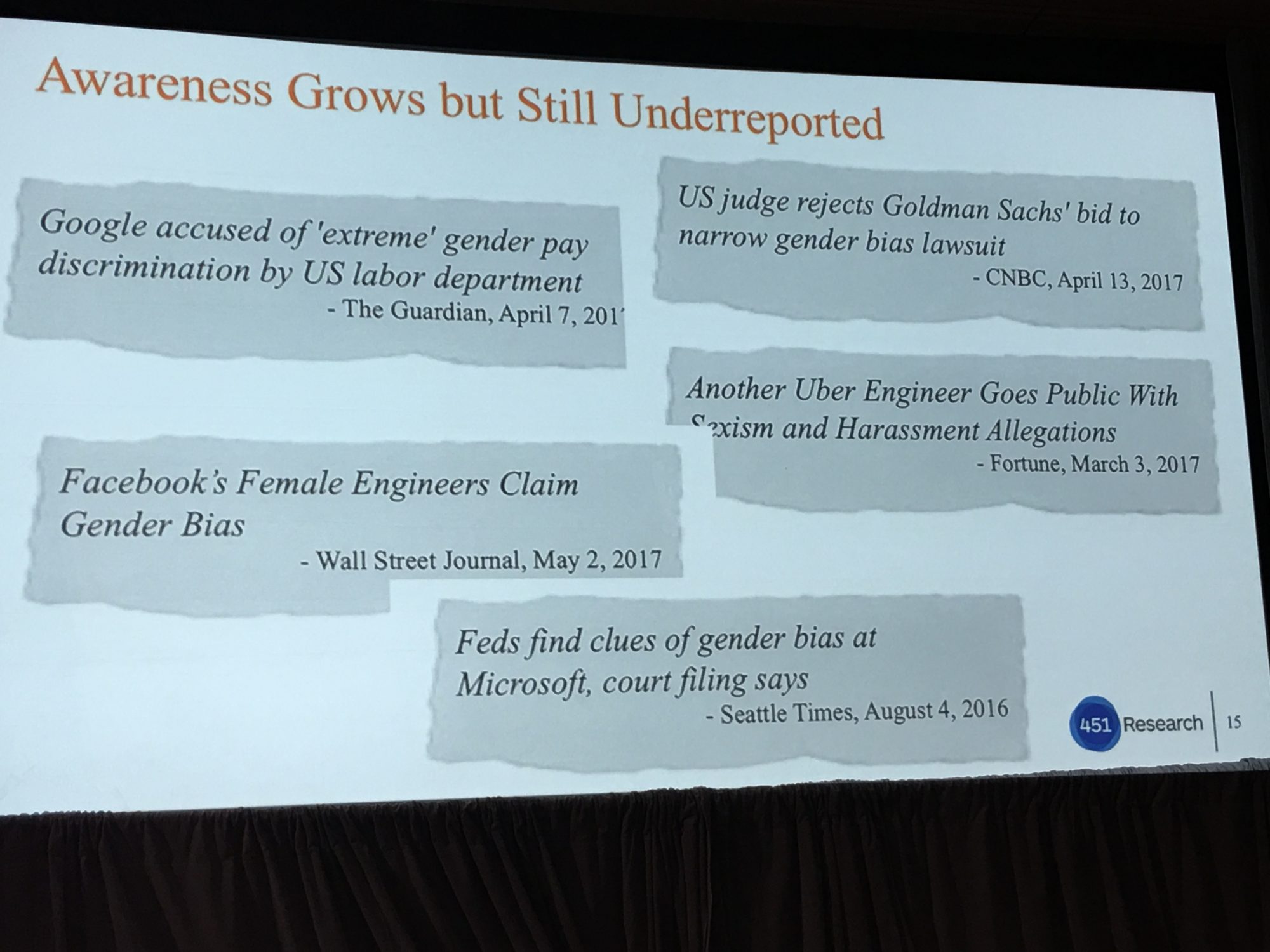 For women already in the STEM field, a panel of female CEOs had several recommendations to make sure they get the most that they want out of their career. They shared what they called their “aha moments”:

Another panel of women discussed how they entered STEM in the first place, with the common thread being they were encouraged early in life to excel at school by parents, relatives, and their community.

One of the panelists described how the engineering faculty she attended didn’t have a women’s washroom, as there were only three female students. Those students banded together and rebranded one of the men’s washrooms (an action which took place at the conference as well). The common theme among the panelists was that they were willing to take risks, whether it was joining small startups or changing employment conditions for women in a large organization. 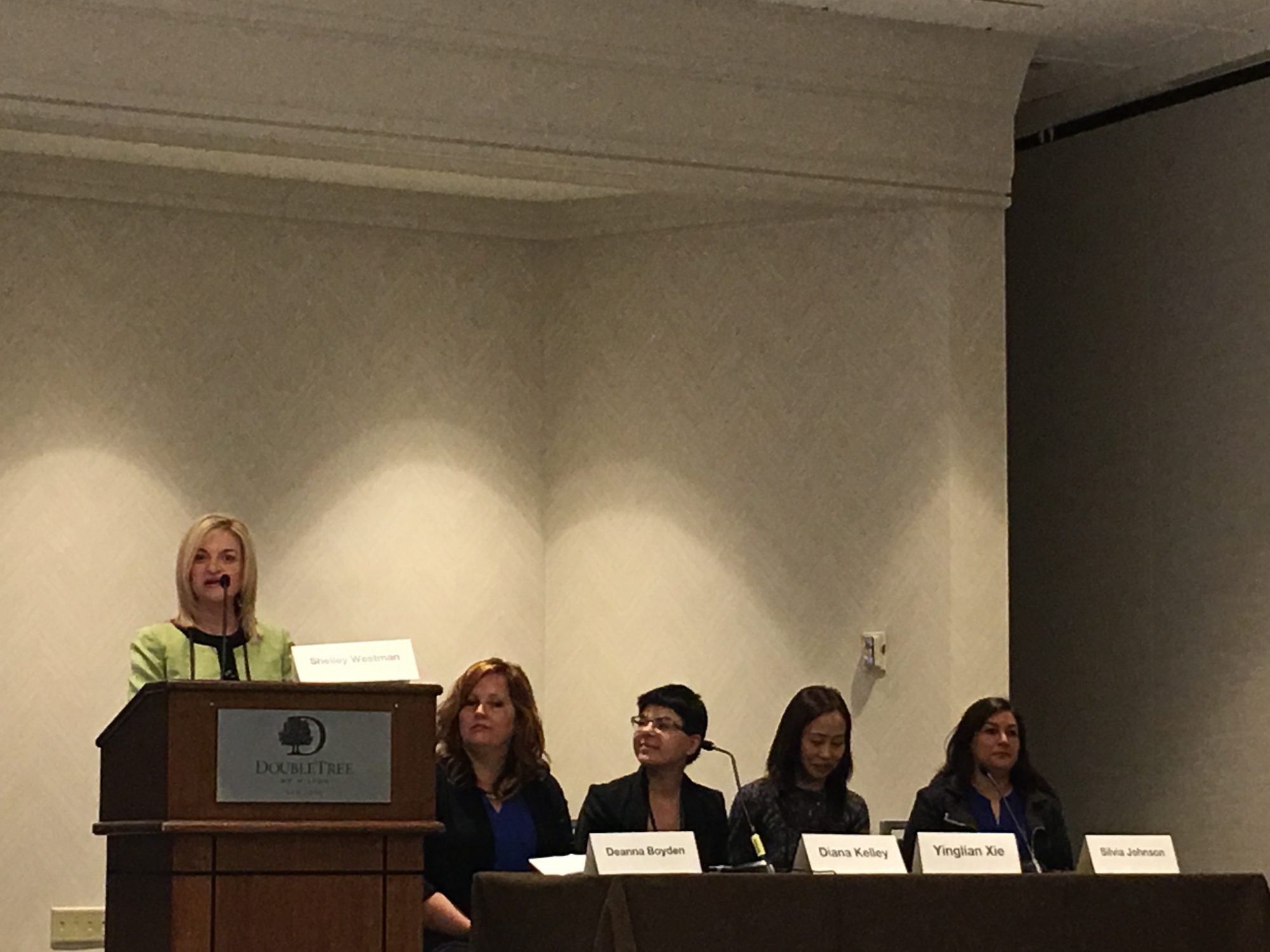 The cybersecurity panel also had excellent panelists, such as Yinglian Xie, a PhD who did her thesis at Carnegie Mellon on cyber security, worked at Microsoft, and later co-founded a company that develops new fraud technology for larger scale attacks. The panel also included Diana Kelly, the global security advisor at IBM, and Deanna Boyden from the SANS Institute in Calgary. The panelists emphasized the cybersecurity field’s low unemployment rate, since companies are constantly looking for new people who are open minded, curious, persistent, and like chasing after problems.

They also reinforced that it is difficult to keep up-to-date in the field as you need to follow the hackers who often have unlimited research and development budgets.

The women at the conference not only believe in collaboration and mentorship, but practiced what they preached by actively participating in coaching circles, mentoring sessions, and mingling during lunch and breaks. According to the organizers, the number of attendees increased from last year to more than 1000 between the conference and its one-day career fair.

There were a few men at the conference as well, experiencing what women deal with daily: being a minority at meetings and conferences.