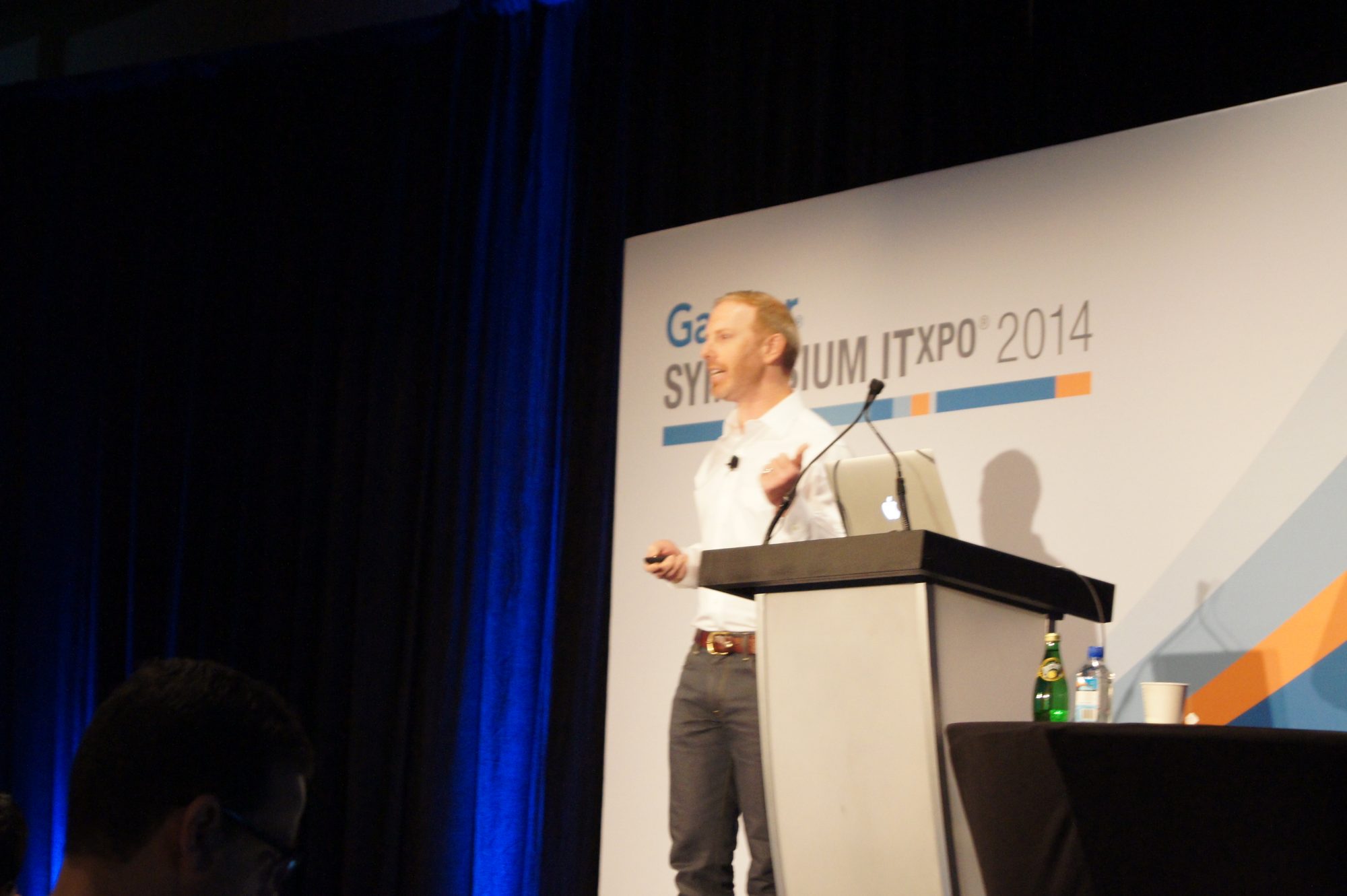 The uphill battle of the CIO in building themselves into leadership positions involves overcoming not only the general dislike of technology in popular culture, but the view that technology-based rules in the work environment are simply something to be worked around. We recap the final day of Gartner Symposium 2014.

Our audience got a full dose of talking business, starting with a no holds barred presentation from legendary investor Peter Thiel. Thiel made his early money in PayPal and has gone on to be one of the best known venture capitalists/entrepreneurs in the technology sector. Thiel is articulate, controversial and engaging. If any CIO wants to learn the language of business today, Thiel is the place to start.

Thiel was blunt. He minced no words. If he’s right, CIOs have an uphill battle in talking to the business. According to Thiel, our society really hates science and technology. Look at any Hollywood movie and you will see it – Terminator, Minority Report, Gravity – technology is scary – it will take us to the apocalypse.

A noted contrarian, he hates trends and buzzwords. To Thiel, the cloud is largely a fraud. There are shockingly few great technologies that come out of universities. Great advances like quantum computing to Thiel are a fraud.

Nor does he have a lot of time for the ways in which technology companies are developed. Incubators are a waste of time – a spray and pray mentality. The type of investors who invest a little hoping for a big reward have got it wrong. To Thiel, a large number multiplied by a low possibility still yields a small number – and all too often that number is zero.

He’s critical of technology companies. He claims that the fact that they are all sitting on piles of cash only shows that they don’t have great new ideas to invest in. They can’t come up with an idea that is a big as the one that launched them. Apple makes $150 billion a year on its phone business. What other idea could be as big? Other tech giants were, in his mind, betting against technologies. Thiel claims we haven’t had real innovation in this sector since 2002.

The cloud is a fraud?

Even if you don’t agree with him, you have to admire his logic. Like him or not – and this crowd clearly did – he got a round of applause for his “the cloud is a fraud” comment – but however you stack it, Thiel is the voice of board members and investors.

And if CIOs want to be thought of as strategic – if they want to play at the top level, they have to be able to speak to people like Thiel. It’s not that he thinks the role of the CIO will be obsolete. There will always be a need for someone – some function – that will help the company acquire technology. But can the CIO be a strategic leader? Could a CIO be a candidate for CEO? He thinks that most boards just don’t see the CIO in that light.

So what does Thiel have time for? He’s looking for specific, differentiated offerings that are an order of magnitude better than anything around. That can be a brand new idea. Or it can be a set of existing ideas that are integrated in a new way.

Spare him the jargon. Show him action and results. If you can’t find something that is a quantum leap forward, that is powerful enough to dominate an industry? He’s not up for the investment.

But we can innovate. Even as a self-confessed libertarian, Thiel says that even governments can innovate. The atom bomb was made in three years. The race to the moon in the ’60s. When we are focused on action, when we make substantive moves, when we are truly companies that are one of a kind – that gets his interest.

Keeping in the theme of talking business – we moved from the board room to the operational areas. We took a look at how our work culture has changed and how CIOs need to play a role in that. The clear consensus is this: technology has done a 180-degree turn. There was a time when our employers had the latest technology, when we went to work to get great bandwidth.

Those days are done. Most employees have better technology at home that they do at work. And that’s a real problem. To get and hold on to the best and the brightest, CIOs are going to have to change their thinking.

What matters to employees is changing. At Google, almost no one has a desk phone. You have to request one. Now, no-one expects it. They do expect video conferencing everywhere.

In an app world, employees expect the same mode of delivery that they get on their smartphones. I want it – I get it. Once again, Google delivers that. They deliver whatever software the employee asks for – quickly.

The consensus from Google and the panel they assembled of leading US businesses was clear. You have to give employees what they want not just to make them feel good – but for practical reasons. Every minute that an employee spends not responding to the core needs of the business is an expensive minute. So we don’t want employees struggling with restrictive or aging technology.

But all of this has a downside. You can be too successful. Some of the companies on Google’s forum found that when they implemented a great solution, the take-up could be enormous. How do you deal with the cost of this?

One way was the cloud. By getting out of the infrastructure business companies could focus on developing or acquiring the types of applications that met their real business needs. Infrastructure is important – you can’t have great applications without great infrastructure. Organizations need to be able to scale successful solutions rapidly.

Google has developed over 90 applications for their own use – on their cloud and development platform. But with the infrastructure and platform maintained for them Google’s own IT function only has to worry about making great applications – no capacity planning, no maintaining the environment – that’s a thing of the past.

Another way to deal with costs was simply to make them visible. Our panel all agreed with the idea that employees don’t want to be treated like children. In fact, if you treat employees like children they’ll play silly games.

We need to think like startups and be creative – not controlling. We learned from mobile that controlling doesn’t work. But we can still get results…

For example. Google lets every employee order the software they need. No questions. The problem they ran into was cost. Employees were happy, but was the investment always well spent? Some companies would have put in a rule. What happens there? Employees learn how to get around the system. Instead, Google just created an app that showed how much money an employee was spending on technology – what their footprint was. In the first half hour their own employees returned $400,000 in licenced software.

Sometimes you have to be creative and borrow from consumer technology. Google discovered that video conferencing costs far more than the price of the individual components. So it put in its own video conferencing – a 1/11th of the cost, using consumer components. That went on to be a product offering for them: Chromebox for meetings.

CIOs need to take a leadership position. The tools we have, the way we work, is all part of creating a corporate culture.

How do you do this in a company that has a substantial legacy? One of the panelists called this Technical Debt – the price of our legacy holding us back. The bottom line is that we have to stop admiring the problem and find creative solutions. If you don’t – others will disrupt you.

From the board room, to the operations – we went right back to the area of software development.  Atlassian is a company made famous by Dan Pink in his book Drive with their Fedex Days – Because you had to deliver a solution overnight. Atlassian talked about “kick ass” software development and the no B.S. culture that drives that.

Started in 2002 by two developers in Sydney, Australia on $18,000 in credit card debt, Atlassian today employs 1,000 people around the world, has 40,000 customers, and is used by some of the biggest names in the world.

Atlassian solves the problem of development time cycles and quality by focusing on their culture – and their customers.

This is the idea of persona based development. Forget features. Forget processes. Focus on who needs to do what to serve your customer. Use automation to get rid of the mundane and low value tasks. Then focus relentlessly on the following the customer journey. Focus on collaboration. Use tools that enable that collaboration. Challenge every aspect of how you do things until you are focused on your customer’s personas and their needs.

Focus on team ownership. No user silos. No development silos. And when you have to choose tools or culture – choose culture. The creativity of your team will find the tools and the processes.

And that’s where we got to – from the board room to the operations to development itself – there is a tremendous opportunity to show leadership – to really use technology from the cloud to free up our organizations. And we will be successful as CIOs when we lead in:

A tall order – but if we as CIOs want to be relevant to the business, we have to be show the leadership that can make this happen.

Previous article
Five-year shift made the cloud mainstream: Peter Coffee
Next article
How you can get full investment value for your startup