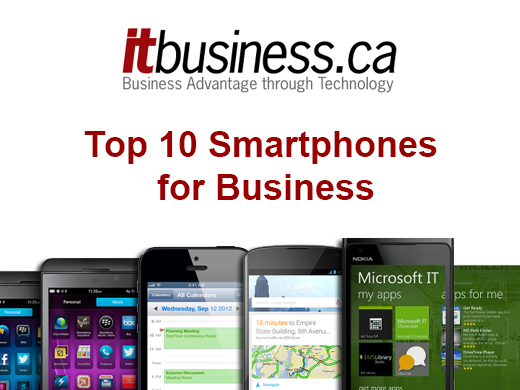 The image of the “CrackBerry” wielding executive is still the one most widely associated with the business smartphone. However, in today’s world of BYOD (bring your own device), and with the “Consumerization of IT”, the business smartphone landscape in Canada has changed significantly over the past year, with both iOS and Android devices becoming more common in the workplace. At the same time BlackBerry is mounting a comeback with their new BlackBerry 10 OS, and Microsoft is trying hard to grow their market share with their new Windows Phone 8 platform. In this slideshow you’ll see ten of the best smartphones for business available in Canada today, running on a variety of platforms, available from all the major carriers. 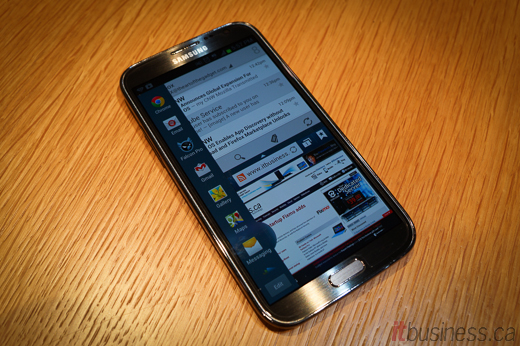 Samsung’s Note II is their second phablet (somewhere between a smartphone and tablet) device, and while its size may at first seem impractical, once you get used to its 5.5” HD screen, you might not want to go back to a smaller smartphone. In a recent update, Samsung added a multi-window mode, which allows two applications to be open simultaneously on the screen for easier multi-tasking, something that would only be practical on a screen this size (or larger). The Note II incorporates Samsung’s SAFE (Samsung for Enterprise) technology for enhanced device security, and the Note II should also support their just-announced KNOX solution, which will separate business and personal use on the same device, similar to what BlackBerry is doing with Balance. 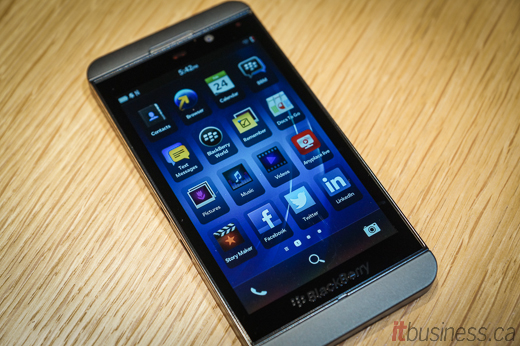 BlackBerry’s latest phone, the Z10, is their first device to launch with their new BlackBerry 10 OS. This is a totally new OS built from the ground up to incorporate a lot of new innovations, including BlackBerry’s new Flow UI, which uses gestures rather than buttons to navigate around the phone. The Z10 has BlackBerry 10’s Hub, a unified inbox that includes messages from email, social media, SMS and BBM in one easy to manage location. BBM has been updated to support video calling, and also has a new Screen Share feature, allowing you to share you phone’s desktop with a colleague for easier collaboration. BlackBerry 10 also as an updated version of Balance (which requires you to be running BES10 on the back-end), allowing the phone to run in a work mode that separates confidential corporate information from your personal data. 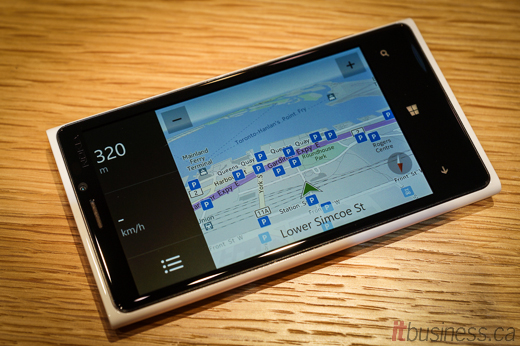 Nokia’s Lumia 920 is their flagship smartphone, running Windows Phone 8. While Microsoft doesn’t allow nearly as much customization as Google does with Android, Nokia has created some exclusive applications for their Windows Phones to make them stand out, one of them being HERE Drive, a turn-by-turn in-care navigation app, which is built on HERE Maps (formerly Nokia Maps). HERE Maps allows for offline map storage on the phone, meaning you won’t have to worry about data roaming fees when using it on an overseas business trip. The Lumia 920 also has one of the best cameras of any smartphone, with excellent low-light performance, and its PureMotion HD+ screen has what Nokia calls Super Sensitive Touch, which allows the touchscreen to work even if you are wearing gloves, perfect for our cold Canadian winters. 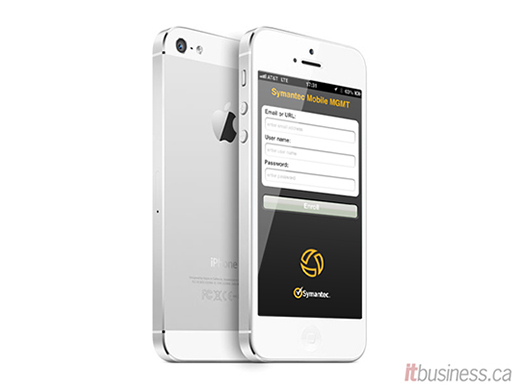 The iPhone 5 is the latest version of, arguably, the most popular smartphone in the world. It has a bigger 4-inch display, and is thinner than last year’s model. While it may seem that Apple’s iOS platform has been falling out of favour lately, with the rapid rise in popularity of Android, it is still the number one platform for mobile applications, both business and personal. If there is a business solution or service your company uses, you can be sure there is probably an iOS app over any other platform. The iPhone 5 is also a very secure mobile platform, by the very nature of how Apple coded iOS, with apps running in their own sandbox. This prevents potentially malicious apps from being able to infect other parts of your phone. Because of this level of security, iOS is good choice for Enterprise use, and is supported by all the leading MDM solutions, such as Symantec’s Mobile Management.

The iPhone 5 is available starting at $179.99 on a 3-year term from Bell, Fido, Koodo, MTS, Rogers, Tbaytel, Telus and Virgin Mobile. 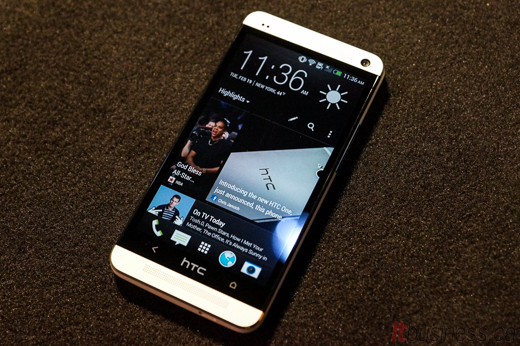 HTC announced their new One phone in mid-February, and while it will not be available in Canada until March, we did get a chance to spend some time with it, and it does have a number of features that will make it a great business smartphone. The One’s body is machined from one piece of aluminum, not only making for a very attractive phone, but also an extremely rigid and durable device. While it does run Android Jelly Bean, HTC has added the latest version of their custom Sense UI over top, and one of the new features of this version is BlinkFeed. HTC BlinkFeed is an application that appears on your home-screen and visually presents updates from multiple sources. For business you could configure it to display important business news and communications, so you have crucial information on hand as soon as you turn your phone on. The HTC One is also one of the first phones to use Qualcomm’s new quad-core Snapdragon 600 processor, for ultra-smooth performance on its 4.7’ full HD 1080p screen.

Pricing for the HTC One has not been announced, and it will be coming in March to Bell, Rogers, Telus and Virgin Mobile. 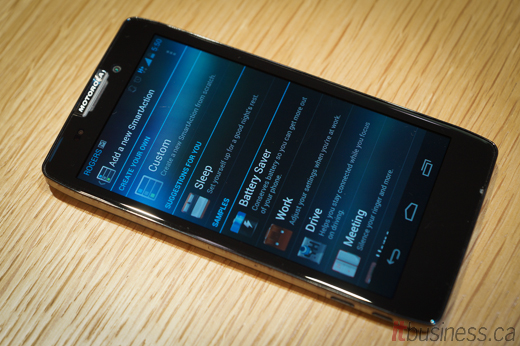 Motorola’s RAZR HD LTE has one of the largest batteries of any Android smartphone, 2530 mAh, allowing you to use this 4.7” HD screened device all day, even with multiple email and social media accounts synchronizing, without fear of it dying (battery life being the Achilles’ heel of many an Android phone). Motorola also just updated its OS to Jelly Bean, the latest version of Android, which features Google Now, Google’s enhanced search assistant (which becomes an indispensable mobile tool once you start using it). The RAZR HD runs Motorola’s SmartActions app, which allows you to create location and time based rules to automate daily tasks, such as setting your phone to silent in a meeting. The RAZR HD is also one of the best made Android smartphones, featuring an aluminum frame, carbon Kevlar back and a splash-guard coating to protect it from the elements.

The Motorola RAZR HD LTE is available starting at $49.99 on a 3-year term from Fido, Tbaytel and Rogers. 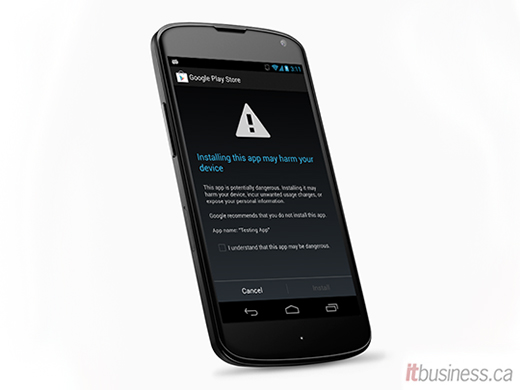 The Nexus 4, built by LG for Google, is the latest in Google’s line of devices that run pure Android, free of any manufacturer and carrier customizations. The Nexus series of devices is also the first to get the latest version of Google’s mobile OS, and the Nexus 4 runs Android 4.2 Jelly Bean, which has some significant updates to Android security. Android 4.2 will now scan apps before installing them, and actively block apps that contain malware. The Nexus 4 is also an unlocked device that is available to buy directly from Google for a very low price ($309 CDN for the 8GB model) compared to comparable smartphones sold through carriers, so if your company is still providing employees company-owned devices, or you need a new phone that meets an organization’s BYOD policies, the Nexus 4 is excellent value for money. The Google Nexus 4 is available directly from Google starting at $309 with no term, and starting at $0 on a 3-year term from Fido, WIND Mobile, Videotron and Virgin Mobile. 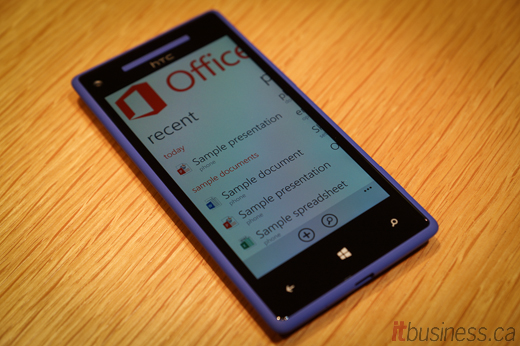 The HTC 8X is a slim, compact (in comparison to huge devices like the Note II) Windows Phone 8 smartphone. It has a beautiful 4.3” HD screen powered by a 1.5GHz dual-core Qualcomm Snapdragon S4 processor. Being made by HTC, the quality of the materials and overall design are top-notch, and the 8X has a dedicated audio amp for excellent sound quality and volume. While HTC doesn’t included as many exclusive apps as Nokia’s Windows Phones (though some of Nokia’s WP8 apps, like HERE Maps, are available on the 8X too), it still runs Microsoft’s latest mobile operating system extremely well, and being a Microsoft OS, it naturally works best when used in conjunction with other Microsoft services. Windows Phone 8 fully integrates with Office 365, and has SharePoint Workspace Mobile, allowing you to natively access content on your corporate SharePoint while on the road. Windows Phone 8 also has additional Enterprise management features when used with the appropriate Microsoft back-end solutions, like a centrally-managed private app store called the Microsoft Company Hub.

The HTC 8X is available starting at $29.99 on a 3-year term from Bell, Tbaytel and Rogers. 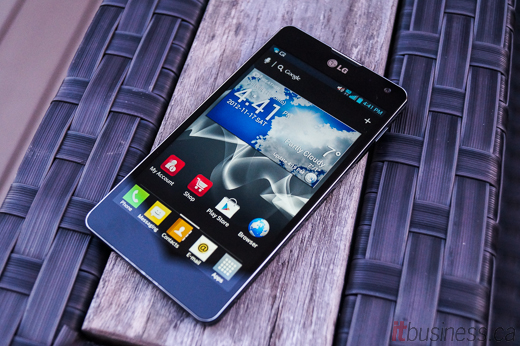 The Optimus G is the Nexus 4’s cousin – it runs the same S4 Pro quad-core processor, and has the same 4.7” HD IPS screen, but it is enclosed in a slightly different shell and runs LG’s own customized version of Android. While it currently still runs Android 4.0, Ice Cream Sandwich, LG has promised an update to Jelly Bean soon, and even with Android 4.0, the Optimus G has a number of unique software features that make it stand out. LG’s QuickMemo mode allows you to capture screenshots of anything you are viewing on the phone, such as a map or business documents, and annotate them with handwritten notes which you can then share with colleagues. It also has wireless video output, using the Wi-Fi Alliances new Miracast standard which will be supported by future display devices like TVs and projectors, and can be added to legacy displays via a dongle. Using the wireless display, and LG’s Dual Screen, Dual Play mode, you can send a PowerPoint presentation to a projector, while viewing your reference notes on the Optimus G.

The LG Optimus G is available starting at $24.95 from Bell, Rogers, Sasktel, Tbaytel, and Telus. 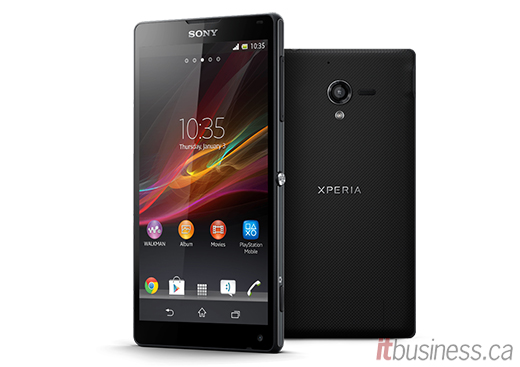 The Sony Xperia ZL is not due to be out until April in Canada, but we did get a chance to spend some time with it at CES last month, and there are a number of reasons why we think it will make a good smartphone for business. If you are looking for a phone with a very large screen, but don’t want to have to carry around something as large as the Galaxy Note II, then the Xperia ZL might be a good option to look at. It has a large 5” full HD screen, but there is minimal bezel around the edge of the screen, making for a very compact phone despite its big display. The screen also uses Sony’s OptiContrast technology which leaves no gap between the LCD panel and the glass protecting it. This means less reflection for better outdoor visibility. The Xperia ZL also supports NFC (Near Field Communications), which works with Sony’s SmartTags, that are NFC enable tags that you can program phone settings and profiles into. For example you can program a tag to store that you want your phone to switch to vibrate while in the office, and to connect to your company’s Wi-Fi, so when you get to work and tap the phone on the tag, these settings are instantly applied.

Pricing for the Xperia ZL has not been announced, and it will be coming in April to Bell, Mobilicity, MTS, Rogers, Videotron and WIND Mobile

6 new smart watches that tap into your athletic side