Check out the newest addition to Softchoice’s 125,000 square-foot campus 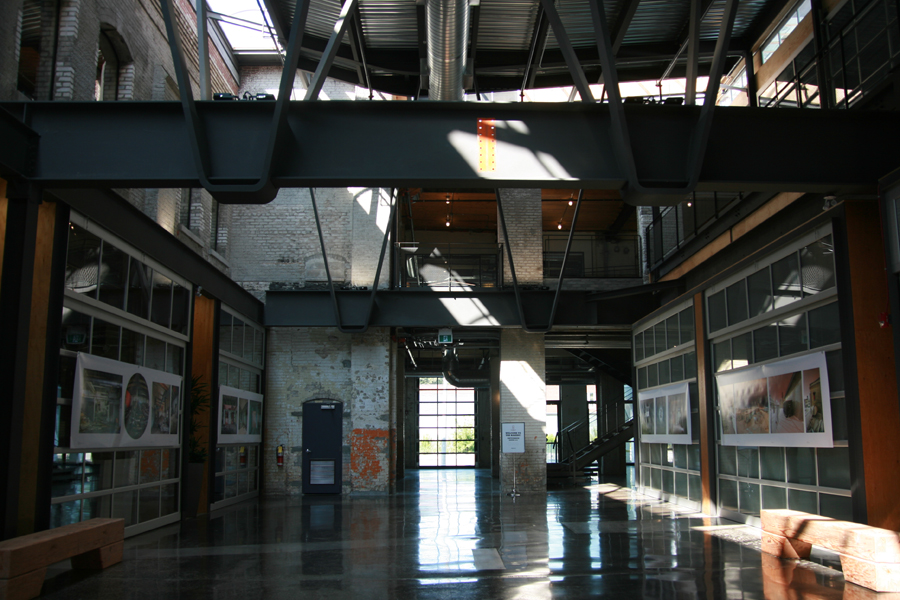 Toronto-based solution provider and CDN Top 100 winner Softchoice recently added a new section to its existing 100,000 square-foot campus in Toronto’s Liberty Village neighbourhood – a 25,000 square-foot partition of a former Canada Bread factory designed to maximize collaboration between its 900 or so employees. Take a look. 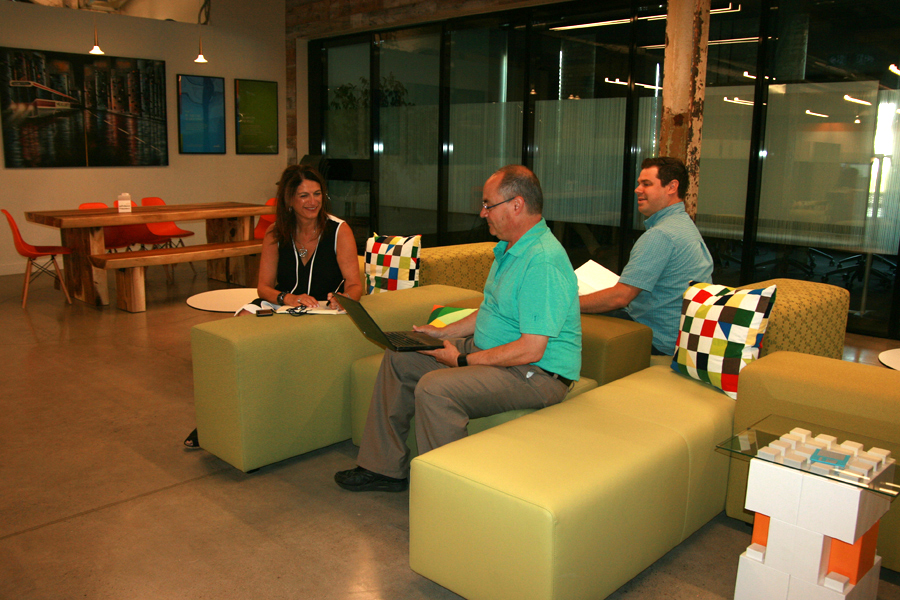 Our tour, led by Softchoice director of strategic innovation Erika Van Noort (left), senior facilities manager Greg Jones (centre), and communications manager Joel Hoidas (right) begins in the “living room,” an open space that stands behind the main meeting room, known as Union Station, and serves as the primary destination for first-time visitors. The goal, Jones says, is to provide potential clients with an informal setting where they can relax and have equally easy access to both meeting technology and refreshments (a kitchenette is just behind us). 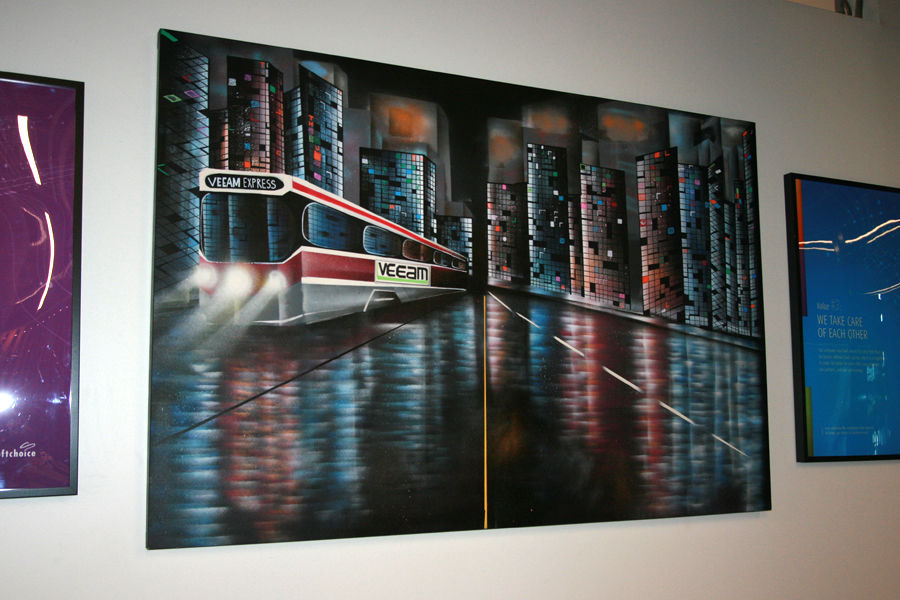 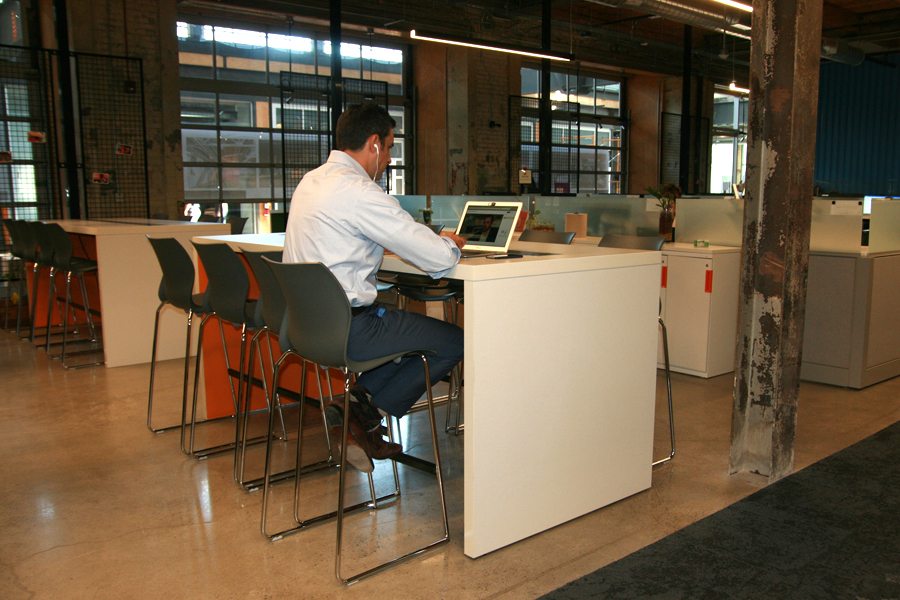 The addition’s open-concept design serves a dual purpose, encouraging collaboration while respecting the building’s history, Jones says. “We wanted to leave it open, and we wanted to respect the traditional walls and ceiling beams,” he says. “We really didn’t want to turn it into a typical office.” These particular desks are frequented both by employees wanting a quiet place to work and teams looking for a meeting space. 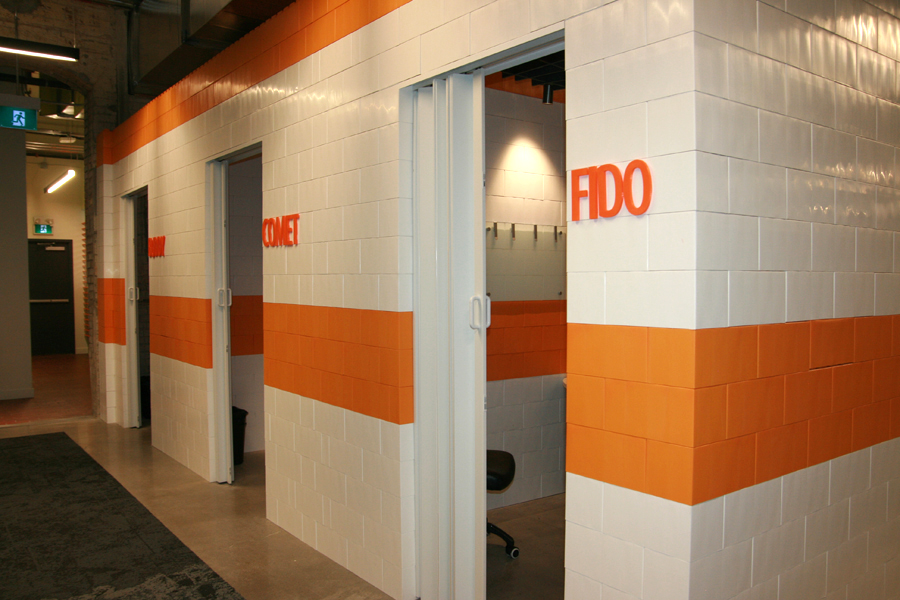 Nearby, another set of meeting rooms have been added to the former factory floor using Lego-like Everblocks. “We wanted to provide employees with multiple ways to get their jobs done,” Jones explains. “You can work at a traditional workstation, you can meet in a small room like this, or you can have more collaborative meetings in one of our larger rooms or open spaces.” As for the names – Fido, Comet, and Buddy – Softchoice has a history of naming meeting rooms after dogs, he says. 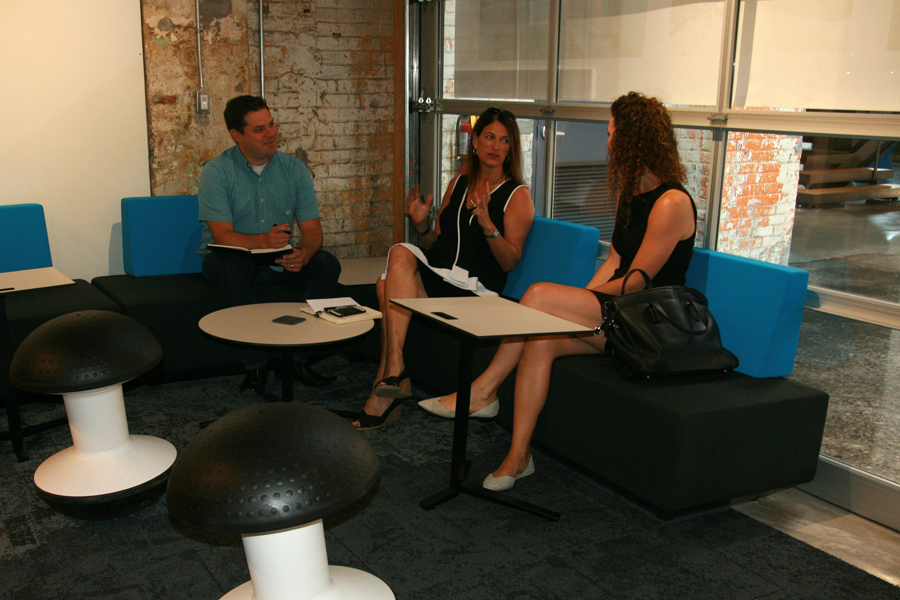 Separating Softchoice’s offices from the building’s main hallway is a series of garage doors, and Softchoice’s designers made sure that every location had a different setup, depending on the type of seating and table users prefer. Other stations have armchairs, a dining table, a coffee table, and no table at all. 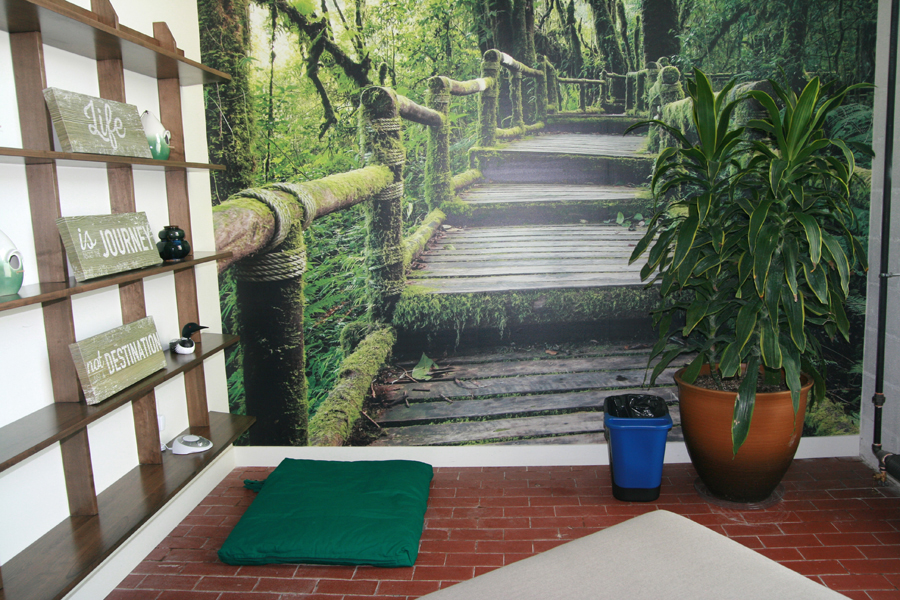 It’s hard to capture, but the Forest might just be the most soothing room we’ve yet encountered on these tours. “Sometimes you have a private call, or you need to get away from everything and take a few minutes to recharge, so we created what we call ‘quiet rooms,'” Jones explains. Unheard in this photo are the ambient sounds of nature including running water and wildlife; unsmelled is the scent of vanilla and cinnamon; unseen is the chaise longue behind the photographer, and the wooden bird and white feathered dreamcatcher above him. 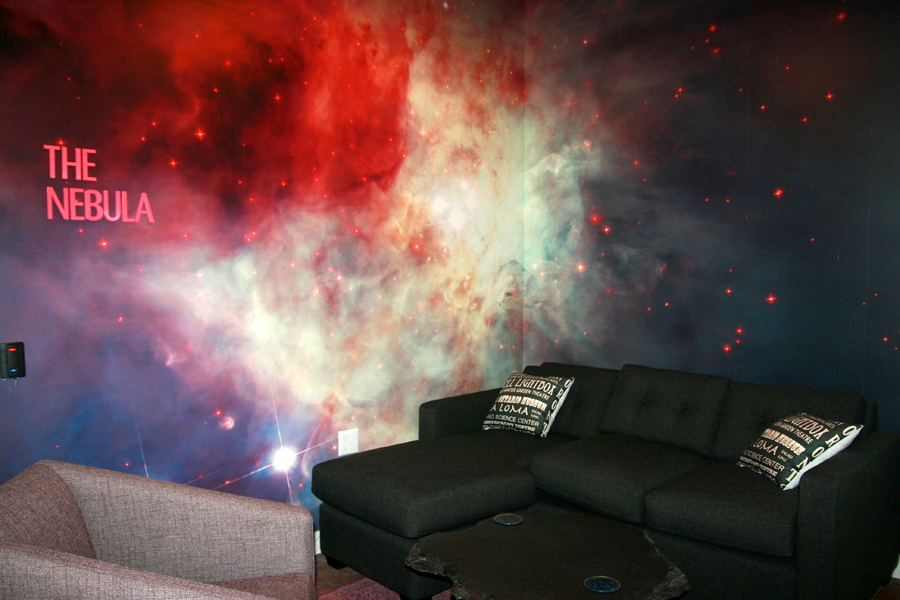 “This turned out to be a little corner where nothing was being done, so we decided to go out, buy some furniture, and turn it into a literal space,” Jones says. “You don’t have to book it – you can just come with your laptop and hold a meeting. It’s probably my favourite spot in the building.” 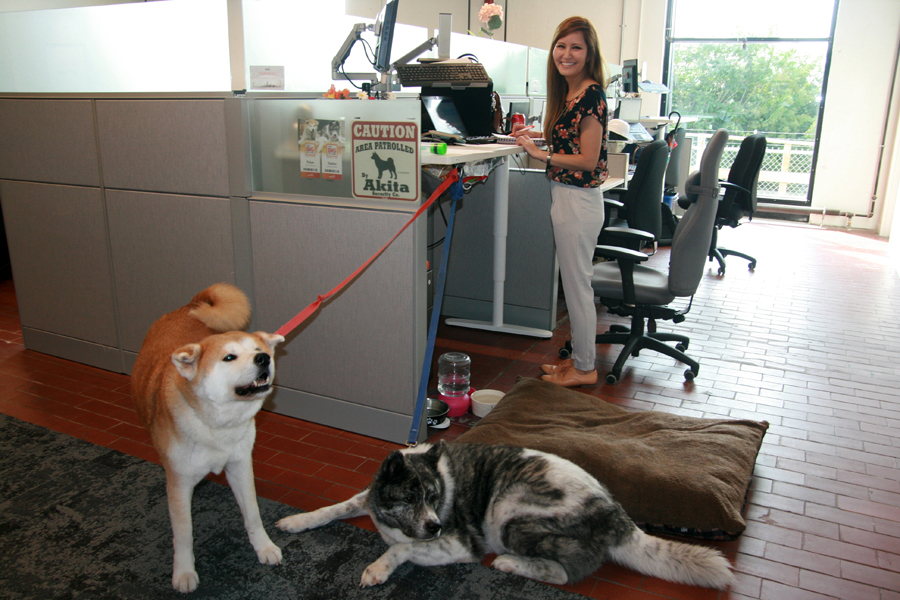 We’ve seen secret libraries, robot coworkers, and a full-sized penalty box, but Softchoice trumps them all by inviting employees to bring their dogs to work. Jones says the company’s employees have registered some 80 dogs in total, with around 30 at the office on any given day. These two are named Tokyo (left) and Taisho (right). 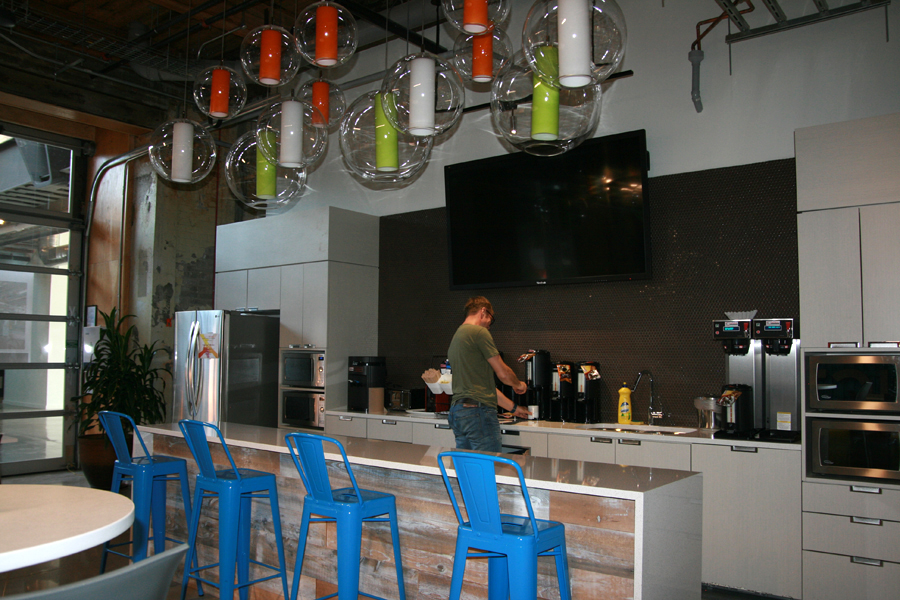 What Softchoice calls “High Park” might not be as well-stocked as some of Toronto’s other tech offices, but it makes up for it with size and ambience. “We don’t want to call it a cafeteria or a lunch room, because if we gave this much space to a place that just gets used between 12 and 1, we’ve failed as designers,” Jones explains. In addition to being used for meetings, the room’s large-screen TV makes it an ideal gathering place for the company’s monthly CEO-hosted state of the union broadcast, “Orange Nation Live.” 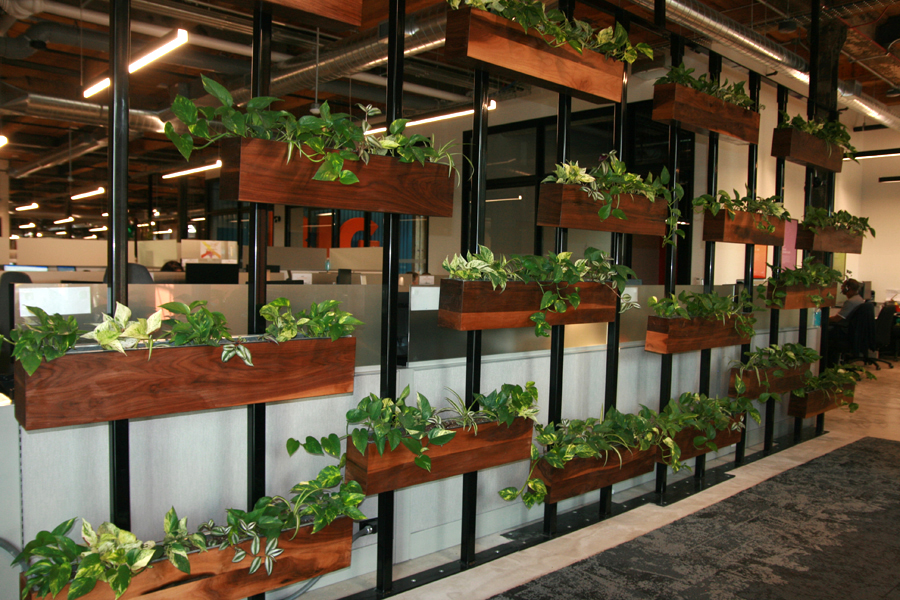 Planted just five weeks ago, when the facility you’re viewing was finally finished, the living wall might just be a line of sprouts right now, but when fully grown it’s going to cascade down, creating a solid partition between the workspaces in front and the meeting spaces behind us. The goal, Jones says, was to bring the outside in. 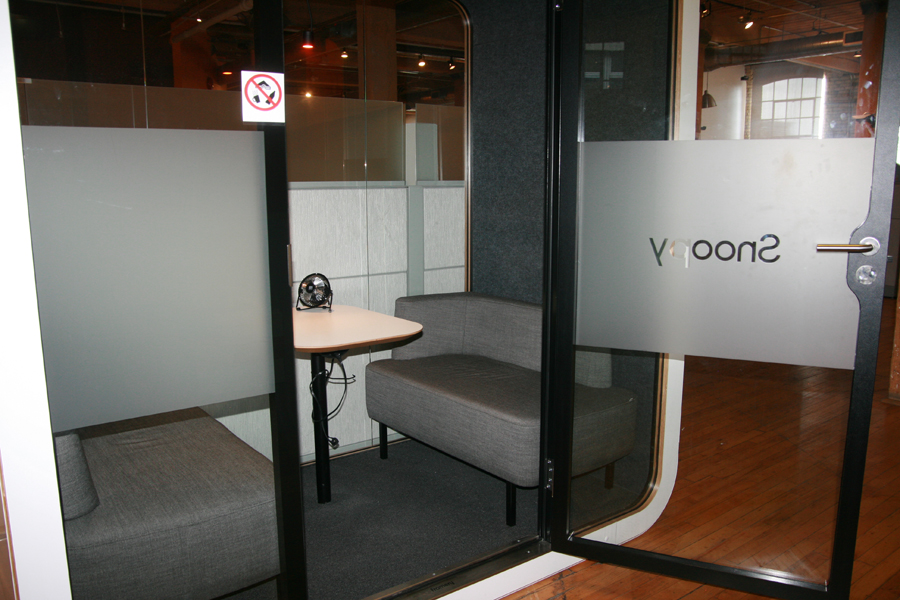 Another way Softchoice differentiates itself from other companies is the way its meeting rooms have all intentionally been designed to be different – in terms of size, in terms of ambience, in terms of available technology. For example this “meeting pod,” designed by a company called Framery and nicknamed “Snoopy,” is completely soundproof – and, Jones jokes, can comfortably fit two North Americans or four Europeans. 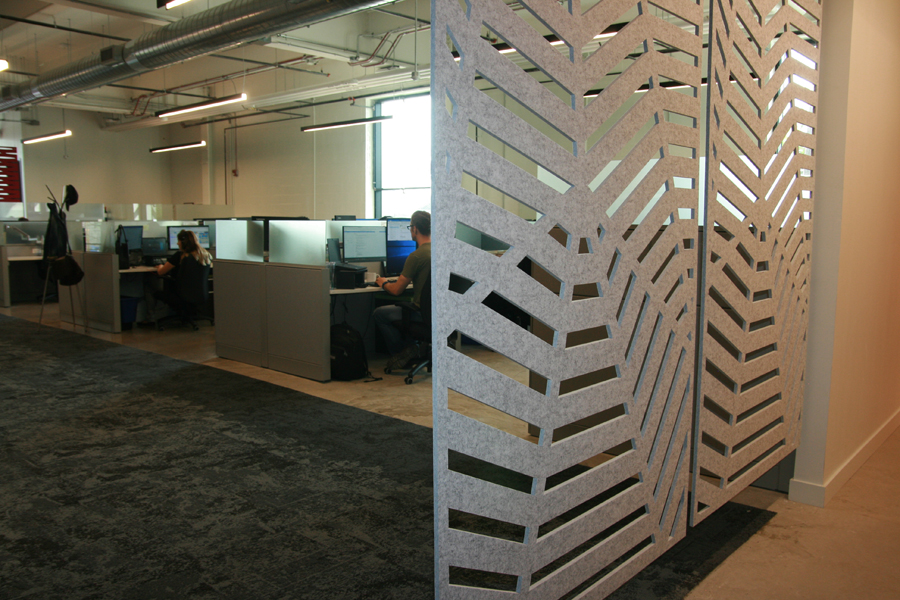 Which brings us to another fact worth mentioning: while Softchoice’s newest facility is a massive open space filled with chattering employees (and the occasional bark), you can’t hear as much as you’d think. That’s intentional, Jones says: “One of the factors we’ve really paid attention to is sound,” he says, gesturing at these sound management panels. “In additional to separating rooms and having decorative value, they’re quite good at blocking noise.” The company has installed sound masking throughout the building’s walls and ceilings as well. 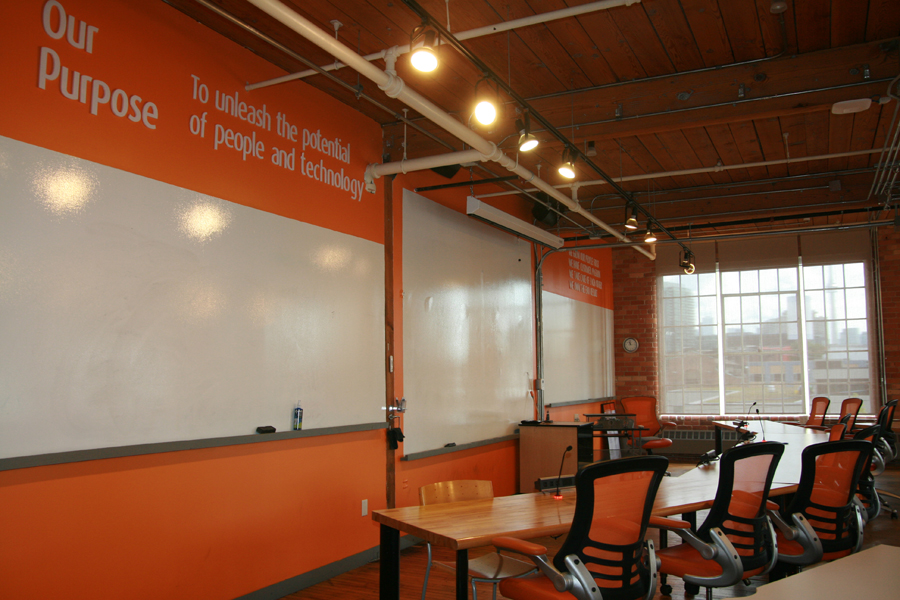 In case you’re wondering, the 700 or so Toronto Softchoice employees who don’t work in its newest facility enjoy above-average digs too, with the company’s other buildings featuring amenities such as an employee gym and the two-and-a-half-year-old Sales Academy. Every month or so each of the company’s newest sales recruits, whether they’re from Toronto, Seattle, or Los Angeles, are brought here for three weeks of intensive training, complete with team-building exercises and graduation certificates, before being shipped back to their native cities.

Most futuristic technology from CES 2012