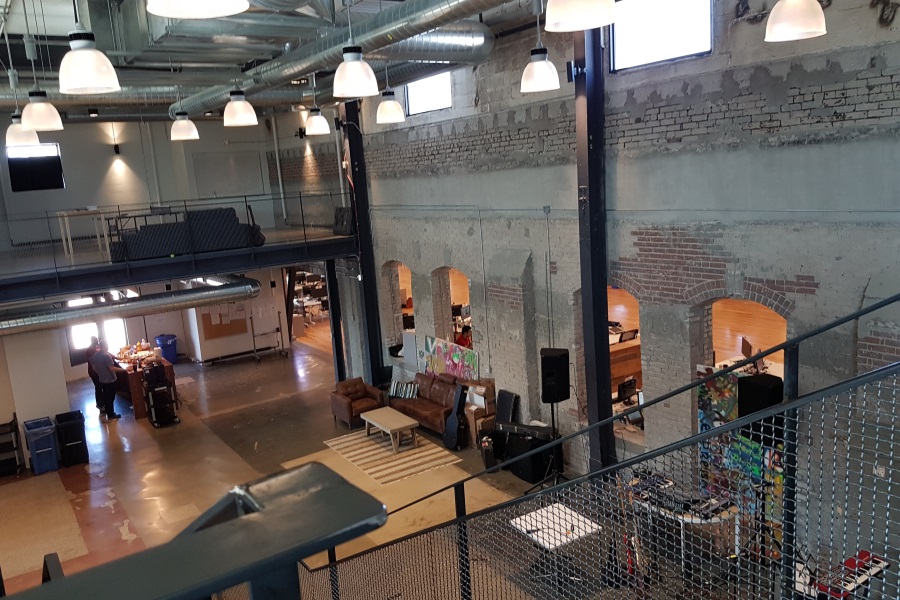 TORONTO – Is this slideshow a shameless excuse to show you the cool design elements inside Vena Solutions’ new Toronto headquarters? Absolutely. But this huge renovation project – which maintains the strongest features of a very old building and updates them in fresh new ways – echoes the story of Vena itself. The company has gone from SaaS startup to Gartner’s magic quadrant in six short years – with one side trip into the world of rock n’ roll. 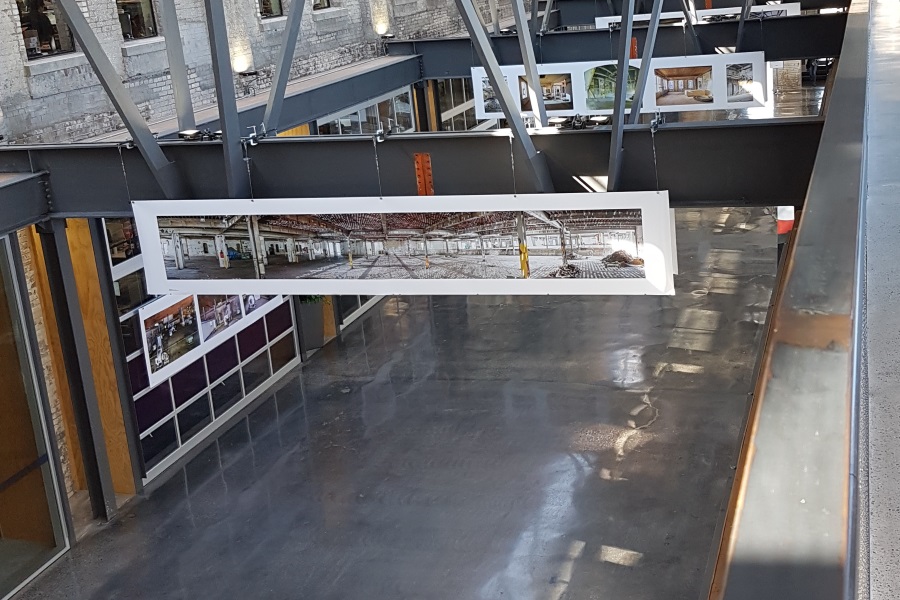 Although Vena is a relative newcomer to the enterprise SaaS market, it chose the 1890s era Canada Bread Factory (a building it shares with fellow solution provider Softchoice) to house its new HQ. Rather than gutting the building’s aging interior, Vena opted to keep as many of its historic architectural features as possible – and complement them with modern design elements. Here, exposed brick window archways contrast with the metal and glass atrium. 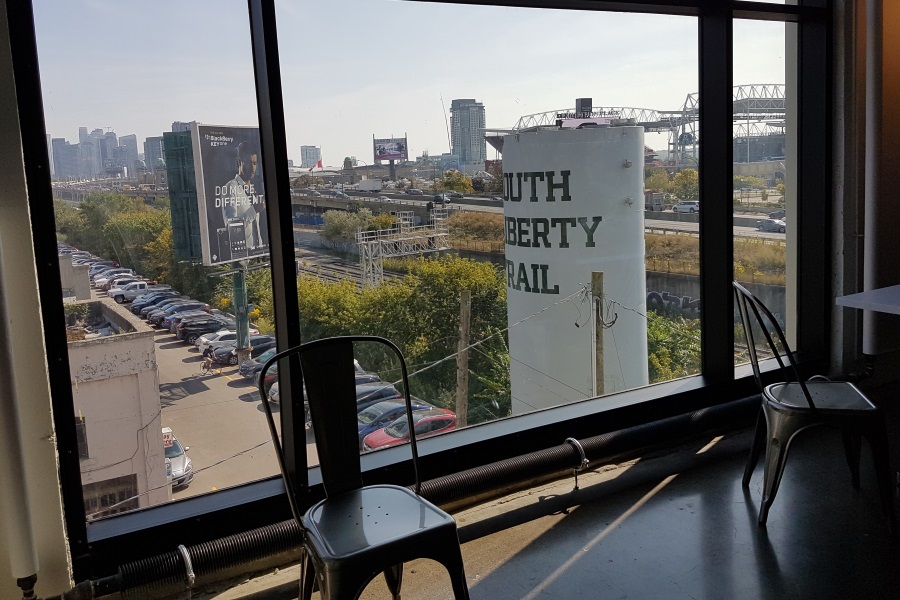 The past and present constantly collide at the 27,000-sq.-ft. office. A view of this old grain elevator looms outside the second floor, bringing the cobblestoned history of surrounding Liberty Village right into Vena’s modernized workspace. It’s also a constant visual reminder to Vena staff that anything, from grain storage vessels to software, can stand the test of time if it’s designed well. 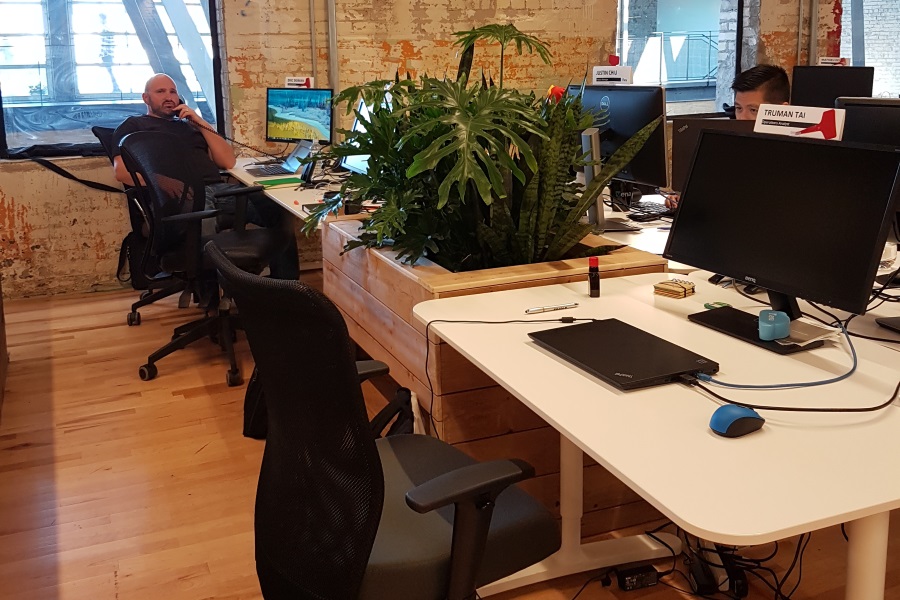 Like many tech sector offices, Vena’s is open concept. Twenty-five foot ceilings and lots of natural light help add a warmer tone to the cavernous workspace. Still, Vena has made design tweaks since moving in. “Everyone overwhelmingly enjoys the space,” says CEO Don Mal. “But we had to get acoustic paneling because it’s an old building that’s really echo-y.” 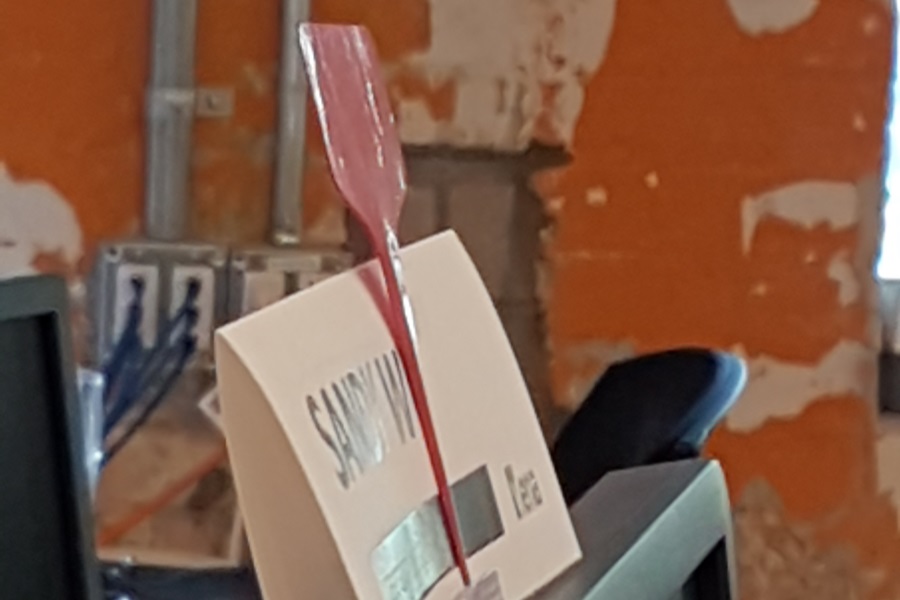 Privacy and productivity can be tricky in such a large, open, workspace. Staffers use these red flags atop their computer screens to signal when they need a little time to themselves. Red flag up means ‘give me some space.’ Red flag down = ready to brainstorm or shoot the breeze. 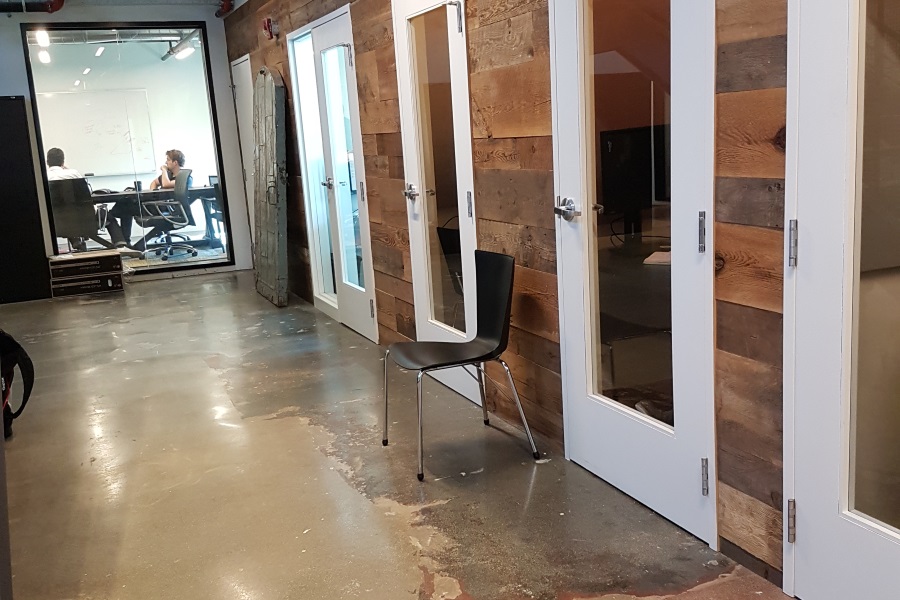 Even in this age of virtual communication, sometimes Vena staffers just need to make private phone calls. These mini phone rooms were created to give them quiet, closed off areas to talk business with Vena customers like White Castle, Berkshire Hathaway or Major League Baseball. 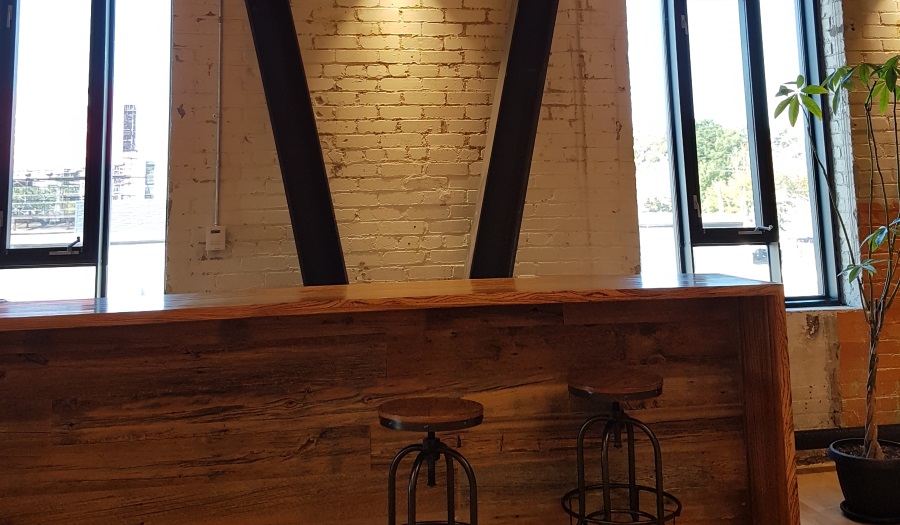 No, Vena didn’t install these giant V-shaped motifs to evoke the first letter of its name; they were already there. ‘V’ could, however, stand for VC: Vena raised $30 million in venture capital in July 2016. Like its new office, Vena took something with a rich history – Excel – and, instead of replacing it, designed a new suite of features to update and improve it for today’s users. Vena’s Excel-based SaaS tools for corporate reporting, budgeting and planning have landed it 400 enterprise clients, offices on four continents and a spot on Deloitte’s 2016 list of North America’s 500 fastest growing tech firms. 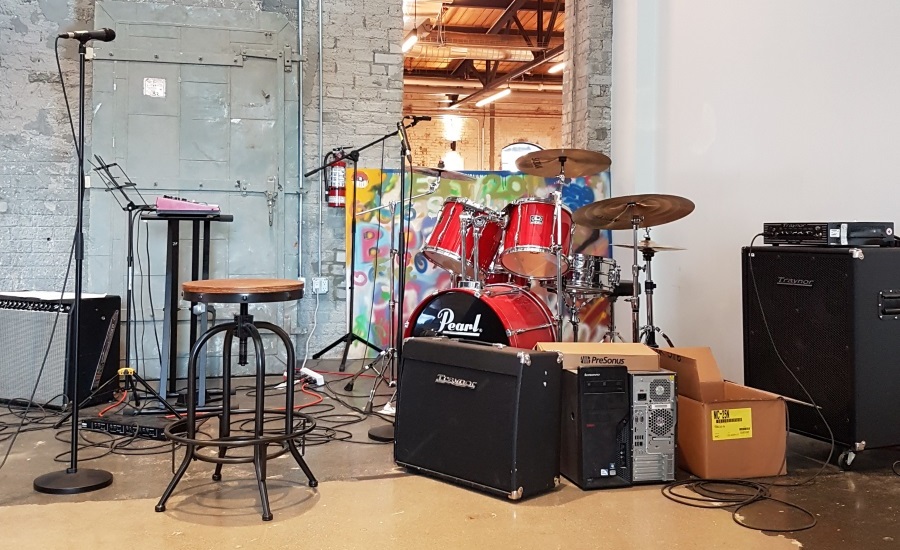 There’s a prominent jam space where CEO Mal regularly shreds the guitar with Vena’s in-house staff band, The Grid Unlocked. In the 1990s Mal quit university to focus on his own band Between the Lines, which signed a record deal and released one single. When the act folded, Mal riffed on his music industry skills to forge a career in tech. “Being able to sell and promote my band, I was able to leverage that and be successful in IT sales,” he says. After major sales gigs at Clarity Systems and Cognos, Mal co-founded Vena in 2011. 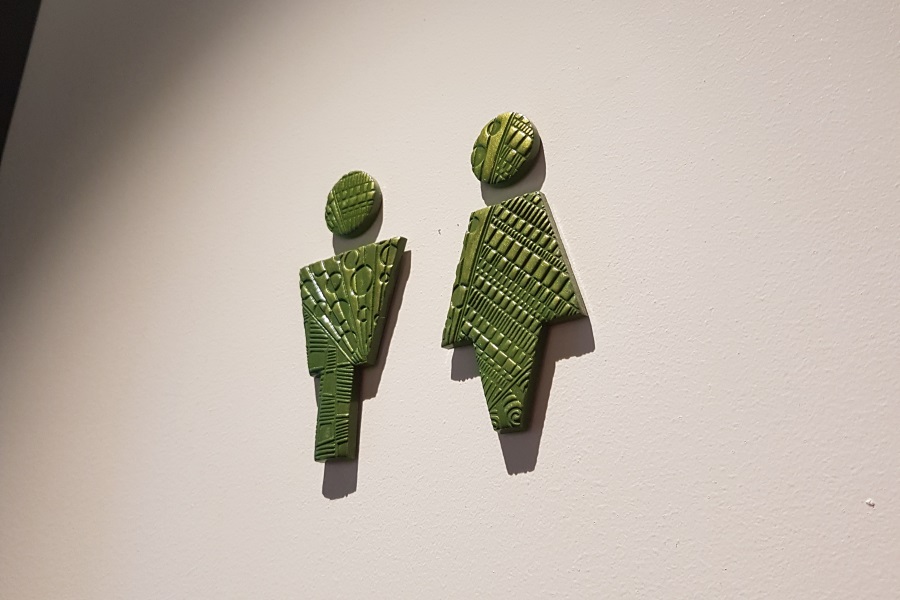 There are no separate men’s or women’s washrooms here, just several unisex ones. It’s another design update meant to bring the building – and corporate culture – into 2017. “We’re inclusive, we’re open. It’s transparent,” says Mal. “We’re all in this thing working together.” 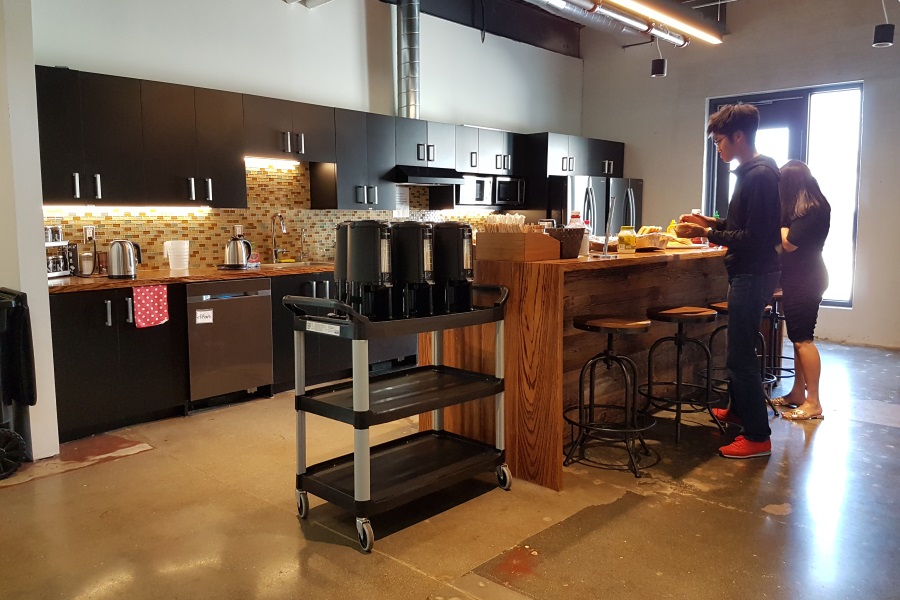 The majority of Vena’s 200 global employees are based out of this new Toronto office, so keeping them fuelled for work was a key consideration in the renovation plans. There are multiple kitchens like this one, well-stocked food and drink provisions and even a coffee bar that can hold its own among Liberty Village’s hippest cafés.

From Altair to Xbox: a visual history of Microsoft

Going Gaga: 14 tech firms that have worked with celebrities (and vice...