While Apple Pay has generated a lot of awareness of interest in the mobile payments space, it’s not available yet in Canada. Vancouver’s nTrust isn’t wasting any time capitalizing on that Apple hype to establish its own competitive offering in the market.

While Apple brings increased market awareness, a number of players have already been in the mobile payments space for a few years. What sets nTrust apart, according to company president Rod Hsu, is that its platform goes beyond mobile payments to be an “all inclusive shop” for consumers to move money in a closed loop ecosystem.

“I have to give it to Apple for pushing a lot of the skeptics on the outskirts into the mainstream. Since Apple pushed forward with Apply Pay it has really pushed the whole mobile wallet space and all the players into the spotlight,” Hsu told ITBusiness.ca in an interview. “Apple (has made) it OK to start looking at and using mobile wallets.”

Currently only available only in the U.S., Apple Pay is a payment system that allows a consumer to attach a credit card to their smartphone and use it at an NFC-enabled terminal. That’s only a part of what nTrust does, said Hsu. Users can create a virtual MasterCard to make online payments that can be destroyed after being used, load a physical prepaid MasterCard, send money to and accept payment from friends, and use the smartphone app as a mobile wallet to pay at participating businesses.

To support the mobile wallet function, nTrust has recently added 20 new merchants to its program, including coffee shops, bakeries, restaurants, clothing stores and food trucks, all located in Vancouver’s downtown core. Hsu said they’re starting in their own neighbourhood, and will build it out as they grow and learn.

A merchant can track the receipt of payments in real-time on a smartphone or payment running the app. The consumer will have the app loaded on their phone, and can select the business from the list of payees, enter the payment amount and hit submit. The transfer will happen in real time with a payment received notification appearing on the end point of the business.

The merchant can settle their cloud account whenever they like, but Hsu said most choose to do it automatically each evening. There’s no sign up fee, commitment or contract for merchants. Currently, nTrust is offering $10,000 of free payment processing for merchants, after which there is a one per cent transaction fee. 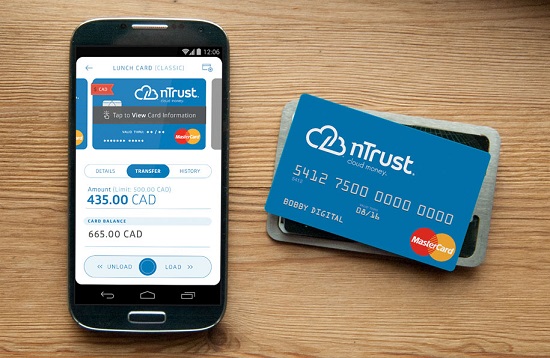 The BlackTail Restaurant and Lounge in Gastown is one of the new merchants supporting nTrust’s mobile wallet in Vancouver, and general manager Andrew Flynn said they’re looking forward to putting it into action.

“It’s the way of the future, and the ability to donate to the charity of your choice was attractive,” said Flynn, referring to the program where nTrust donates 25 per cent of all merchant processing fees to a charity of the client’s choice.

BlackTail will use a tablet to accept and track payments, and Flynn said while their customers weren’t asking for a mobile wallet option, once they learned it was coming they find it a very attractive option.

Digital wallets are currently a crowded space, with banks and a number of other players dipping their feet in with their own systems. It seems a marker ripe for consolidation or standardization, as merchants and consumers aren’t going to want to support and use multiple platforms.

“There’s no particular answer for how it will form out but it’s ever changing, and it really comes down to how the consumers will use it. We need to be adaptable to that,” said Hsu. “It won’t be one wide standard; it will be niche segments based on how people use it. Some will use it to pay friends back, others to send funds overseas. We want to look for the right partners in each channel.”

Jeff Jedras
Jeff Jedras is a technology journalist with IT World Canada and a member of the IT Business team. He began his career in technology journalism in the late 1990s, covering the Ottawa technology sector for Silicon Valley North and the Ottawa Business Journal. He later covered the technology scene in Vancouver before joining IT World Canada in Toronto in 2005, covering enterprise IT for ComputerWorld Canada and the channel for Computer Dealer News. His writing has also appeared in the Vancouver Sun & the Ottawa Citizen.
Previous articleBell will comply with Privacy Commissioner on advertising opt-in
Next articleCybercrime is getting easier and what’s old is new again