Top 5 back to Mac announcements

Apple came roaring back to the Mac on Wednesday by announcing Lion (the next iteration of Mac OS X), two new MacBook Air laptops, FaceTime for Mac, new iLife software and a Mac App Store.

Wednesday’s announcement comes after nearly 15 months of neglect for Apple’s traditional computer business. During its Mac hiatus the company has focused largely on developing iOS devices such as the iPad, iPod Touch, iPhone 4 and the new Apple TV.

But now iOS time is over, at least for now, and Apple is coming back to the Mac with some new ideas for its personal computers. Here’s a look at the top 5 announcement from Apple’s Back to the Mac event.

It’s on the iPhone and the iPod Touch, and now it’s coming to the Mac. A beta version of FaceTime for Mac, Apple’s new video conferencing application, is available for all Mac OS X 10.6.4 users immediately. You can download FaceTime for Mac from Apple’s site.

To sign-up all you need is an e-mail address and an Apple ID. Once you’re up and running, FaceTime for Mac will grab all your contacts from your Mac address book. Then to start a FaceTime call you just select a person’s email address for FaceTime with iPod Touch or Mac owners or select a phone number for calls with iPhone 4 owners. 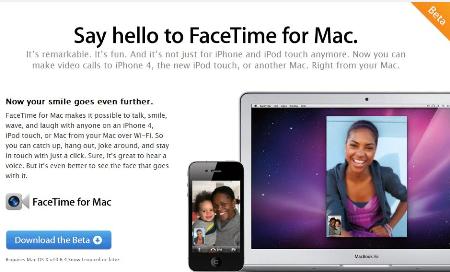 One thing Apple didn’t address was whether the company intended to phase out iChat in favour of FaceTime or keep both. While FaceTime may be great for making quick video calls, iChat is a more full-featured video chat client that includes advanced features such as screen sharing.

Apple said that Mac OS X Lion will be focused on bringing some of the software features from iOS onto the Mac platform. In other words, touch gestures are going to play a big part in the next iteration of Mac OS X. But don’t expect a touchscreen Mac any time soon as had been previously rumored. Apple went to great pains on Wednesday to say it was not interested in creating a touchscreen Mac. The company said it had done extensive user testing and found that it just wasn’t practical to have you extend your arm in front of you to manipulate a vertical screen for long periods of time.

All multitouch gestures for Lion will centre around Apple’s new touch-based mouse products such as the Magic Mouse, Magic Trackpadand MacBook touchpads.

Major new touch-based features for Lion include two utilities called Launchpad and Mission Control. Launchpad is basically a replacement for viewing your applications library in the Mac Finder.

Launchpad sits in the OS X dock, and after you click on it Launchpad displays all your Mac desktop applications in the same way you’d see apps on the iPhone. The application icons are displayed in grids on multiple pages that you flick through using your touch-based mouse. You can also use Launchpad to group your applications into folders just as you can with iOS 4 devices by dragging two apps on top of each other.

Apple has often said it would never launch a netbook. As recently as January during the iPad launch, Apple CEO Steve Jobs dismissed netbooks as a poor solution to fill the product gap between smartphones and laptops. Call it what you want Steve, but a laptop with an 11.6-inch screen is the very definition of a netbook.

It’s been speculated about many times, but Apple is officially building an App Store for the Mac. It’s not hard to see why Apple would be so attracted to using the App Store format on the Mac. The company said on Wednesday that a total of 7 billion apps have been downloaded from the iTunes App Store for iOS devices since launcing the store in 2007. The iTunes App Store has also been a major selling point for prospective new iPhone users, according to many critics and analysts.

Unlike the iTunes App Store, however, Apple suggested it wouldn’t restrict others from selling desktop software outside of its Mac App Store. The Mac App Store also won’t be grafted onto iTunes, but will exist as a separate application. The format will be familiar for anyone who has bought an app for the iPhone. You find the app you want, click to buy and the application immediately starts installing on your computer just like it does on iOS. No more unpacking files, clicking through multiple windows or authorizing the installation with your master password. Just one click and your done. Just like with your iOS device, updates for any of your Mac Store apps will happen via the new store.

Apple isn’t waiting for Lion to launch its new App Store either. The company is planning to launch the Mac Store for OS X Snow Leopard users around mid-January. Developers will be able to submit applications to the Mac App Store beginning in November.

Apple’s new MacBook Air’s also herald what may be the beginning of the end for optical drives and hard drives in Mac computers. Both the new 13.3-inch and 11.6-inch MacBook Air computers rely on flash storage instead of hard drives, and neither includes an optical drive just like the previous MacBook Airs.

Apple said that using Flash storage made it possible for them to give the devices iOS-like capabilities such as “instant on” so you don’t have to wait for the computer to boot up, faster response times, better hardware reliability and longer battery life. Apple claims the 13-inch MacBook Air will give you up to 7 hours of Wi-Fi browsing and 30 days of standby time. The 11-inch Air has 5 hours of Wi-Fi time and also has 30 days of standby.

Apple described the new MacBook Air as an iPad-MacBook hybrid. I would bet that this design philosophy of merging iOS and OS X is going to be a running theme in Apple laptops over the next few years. This will be especially if the Air’s features such as “instant on” and longer battery life are as effective as Apple claims. I would also bet that given Apple’s focus on delivering software, music and video to Mac users through the Internet means that all MacBooks will soon lose their CD/DVD combo drives. But that’s pure speculation.

Despite the company’s recent focus on iOS devices, Apple has big incentives to keep innovating its desktop computer business. Apple said on Wednesday that the Mac accounted for 33 per cent of Apple’s sales for the 2010 financial year. The company sold 13.7 million Macs in FY2010 for a total revenue bump of $22 billion. Apple also said there are now 50 million active Mac computer users worldwide.

Connect with Ian Paul (@ianpaul) and [email protected] on Twitter for the latest tech news and analysis.