Hands-on tinkering must replace textbook teaching as the primary tool for inspiring Canada’s kids to be the next generation of IT innovators, the leaders of a Toronto brainstorming event declared Wednesday.

About 100 people showed up at the Youth as Web Makers BrainstormingSession to hear nine organizations pitch various ways to help Torontoarea kids learn about computing outside of traditional school-basedcurriculum.

Ideas came from far and wide, including one that originated at Boston’sMassachusetts Institute of Technology and another initiated by a groupin New York City. But none of the nine concepts pitched involvedtraditional classroom or textbook approaches to teaching kids about IT.All focused more on hands-on learning or taking kids’ interests andtranslating them into opportunities for IT learning. 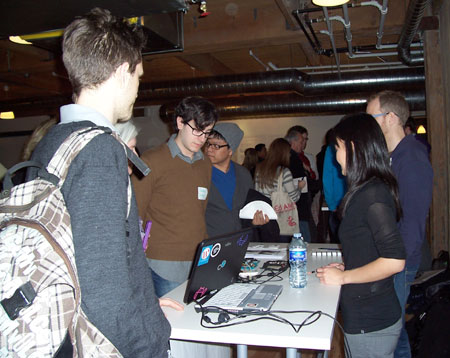 “We’re focusing more on learning code by making something versus learning code for code’s sake,” said Jess Klein, design lead for Hackasaurus, a program run by browser company Mozilla and one of the nine ideas pitched at the event.

For example, by ‘hacking’ a sample Web site and making changes to it, kids in the Hackasaurus program learn about the code elements of Web design. They can also design their own e-card to send to friends or family or use the Hackasaurus ‘X-ray goggles’ cursor function to scrollover Web site elements and see how they were built using code.

New York-based Hive Learning Network takes kids’ activities and tries to ‘Webify’ them, said Lainie DeCoursy, who presented the group’s concept at the Toronto event. One Hive project paired teen skateboarders with teen filmmakers to make a series of films on skateboarding. While the young filmmakers sharpened their technical and creative skills, the process also piqued the skateboarders’ interest in how to create and share films.

“All the projects are driven by the kids’ interests. There was definitely a mentoring thing going on there,” DeCoursy said.

The Toronto brainstorming session was organized by Mark Surman, executive director of the Mozilla Foundation, a non-profit arm of the browser firm that promotes openess and innovation on the Web, and Heather Payne, founder of Ladies Learning Code, a non-profit Toronto group that holds IT workshops for women.

Surman got the idea for the brainstorming event after his keynote speech at Technicity 2011, an IT conference held last fall and organized by ITBusiness.ca and the City of Toronto. After Surman told the Technicity audience how kids can be inspired to learn about computers, many people came up to Surman and asked him how that type of IT learning environment could be fostered in Toronto. After Surman met with Payne for coffee at a later date, the two agreed to host the brainstorming session and see what ideas could be generated.

Surman, a father of two boys aged nine and 12, said technology learning is as crucial to Canadian children as math and language skills.

“Imagine if we only saw literacy as reading and not writing,” said Surman, pointing out that if today’s kids only consume technology but don’t learn how it works, they can’t be fully IT literate at a level now required by the modern IT-based global economy.

That concern was echoed by Gunnar Wentz, a software developer at CGI Group Inc. who brought his11-year-old son Thomas to the brainstorming event. Dad Gunnarremembered his own introductory computer course in high school when“the teacher didn’t know how to program so we were learning from a bookand teaching each other.”

“The problem today is kids have their tablets with them but they don’tunderstand what’s going on underneath (the screen),” said Wentz.

“Apart from being a useful set of tools in a work environment … theprocess of logical thinking and progression that goes with (ITlearning) is always useful,” Wentz added.

Nadia Cox, 16, came to the event with her brother Isaac Wisniewski, 8,and their dad Adam Wisniewski, a software developer at Toronto systemsintegration firm Project X Ltd.

“I’ve been into (IT) for a while,” Cox said. “We’ve moved past printtechnology into multiple technologies and even at school we’reencouraged to use as little paper as possible.”

Based on a Statistics Canada study, Canada’s education system could probably domore to encourage students to follow an IT study and career path. From2004 to 2007 the only academic field out of 12 (others tracked includededucation, health care and law) to see a drop in the number ofgraduates from college and university programs was the area of math,computer and information sciences.

The British government just introduced its new plan for IT curriculumin its schools this week. It would teach 11-year-olds how to writesimple 2D computer animations and require 16-year-olds to learn codingand write smartphone apps.

Christine Wonghttp://www.itbusiness.ca
Christine Wong has been an on-air reporter for a national daily show on Rogers TV and at High Tech TV, a weekly news magazine on CTV's Ottawa affiliate. She was also an associate producer at Report On Business Television (now called BNN) and CBC's The Hour With George Stroumboulopoulos. As an associate producer at Slice TV, she helped launch two national daily talk shows, The Mom Show and Three Takes. Recently, she was a Staff Writer at ITBusiness.ca and is now a freelance contributor.
Previous article4 ways to take control of Google’s Social Search functions
Next articleEricsson seeks to cash in on patents